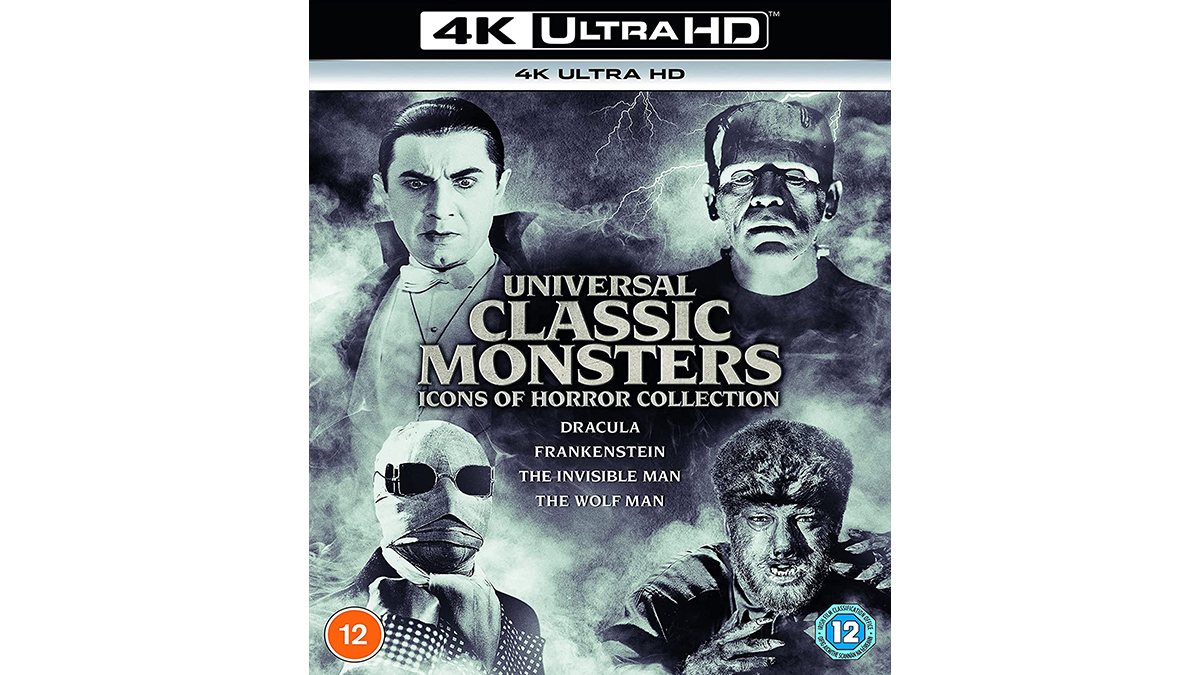 The four movies comprising this ‘Universal Classic Monsters’ boxset shaped cinematic depictions and audiences’ expectations of the characters of Dracula, Frankenstein’s monster, the Wolf Man and the Invisible Man for decades to come. Enormously popular at the time, and now revered for their impact in shaping the early decades of Hollywood-produced cinema, these films are among the most enduring and successful that Universal Studios ever produced.

Bram Stoker’s novel ‘Dracula’ was only a few decades old at the time Bela Lugosi donned the famous black cloak and embodied the world-famous vampire. He was the first actor to play Count Dracula in a ‘talkie’, and the producers of the silent classic ‘Nosferatu’ had been sued by Stoker’s widow for breach of copyright, so the origins of cinematic depictions of the Transylvanian Count were less than auspicious. ‘Dracula’ is undoubtedly stagey by today’s expectations (indeed it is based on a 1924 stage play rather than Stoker’s novel). It plays fast and loose with Stoker’s plot, amalgamating the characters of Jonathan Harker and Renfield in the opening scenes, and it races through the story in only an hour and a quarter. It was an early sign that Hollywood and fidelity to literary sources would always be things apart.

‘Dracula’ must be taken for what it is and viewed as a product of its time. Although the performances are a touch ‘large’ for contemporary tastes, it is Bela Lugosi’s glowering face and Eastern European accent that audiences remember – it is a masterful, definitive performance, staying just about on the right side of melodrama to keep us terrified.

The other films in this collection take a similar approach. Having struck gold with ‘Dracula’, Universal realised they were onto a winning formula. Thus Boris Karloff’s sympathetic portrayal of Frankenstein’s monster, also released in 1931, is similarly notable for bringing a literary monster vividly to life on the big screen, whilst taking plenty of liberties with the source material. Like Lugosi, Boris Karloff was a fine cinematic actor, and he provides enough light and shade even when playing a monster to keep the audience’s sympathy. Universal recognised the draw they had in both talented leading men, and when they put them on screen together, they truly hit the jackpot. Multiple movies featuring Karloff and Lugosi would follow – but this boxset is what would lead to one of cinema’s most popular and enduring big screen duos.

Rather than the plotting or much of the acting, it’s the visuals that continue to impress and astonish. The set design for Castle Dracula is rightly considered iconic. The enormous doorway and grand, decaying staircase are every bit as impressive now as they were in 1931. The visual effects are clever and stand up well today, too. Thus the tortuous journey of the carriage through the Transylvanian mountains is impressively brought to life. Even the attempts to depict bats in flight are more convincing than anything Hammer ever achieved in its horror franchise decades later. Lon Chaney Jr’s transition from man to Wolf Man (1941) is another astounding feat of make-up and camera trickery, aided by a bit of dry ice, that set the standard for years to come. It was probably only bettered forty years later in 1981’s ‘An American Werewolf in London’.

The other film on this release is 1933’s ‘The Invisible Man’, starring the celebrated British actor Claude Rains, who would appear in ‘Lawrence of Arabia’ towards the end of a distinguished career. It’s easy to see why they chose him for the part of Dr Jack Griffin in a loose adaptation of HG Wells’ novel. With the lead actor’s face covered in bandages for much of the film, strong voice work was necessary to carry off the part. It was a trick the charismatic Rains would repeat a decade later in ‘The Phantom of the Opera’.

These classic monster movies have never looked better than presented in 4K for this collection. The sharpness of the picture quality is impressive, revealing the incredibly detailed studio sets in all their glory. Watched in this clarity, it brings a whole new level of enjoyment for dedicated fans of these cult favourites. On top of the almost five-hours of running time comprising the feature films, there are many more hours of bonus features and other extras spread across the discs, which are enough to sate the appetites of the hungriest of aficionados. This includes an entire alternative version of ‘Dracula’, which used the same Universal sets but was filmed at the end of each day – in Spanish! There are some notable differences to spot between the English and Spanish versions, and much more effort to dress Castle Dracula with cobwebs in the Spanish! The leading men have features dedicated to their careers and the impact they had on cinema, as well as multiple documentaries, commentaries and trailers.

If you’ve ever fancied visiting the origins of Hollywood’s horror cinema, ‘Universal Classic Monsters’ in 4K has to be the definitive package. Halloween is the perfect time to take the plunge.