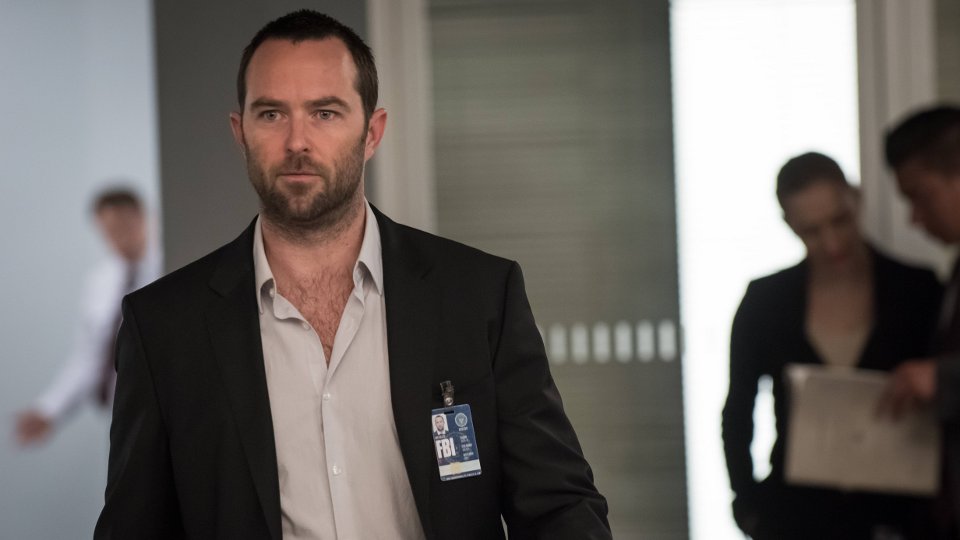 The season one finale of Blindspot opened up with Jane (Jaimie Alexander) taking a shower to wash away Mayfair’s blood.

Meanwhile Weller (Sullivan Stapleton), who is now in charge of the team, was struggling to focus on anything after his father told him he murdered Taylor. He spoke to Dr. Borden about what his father said, wondering if it could have just been nonsense. Borden told him that he should trust his own feelings.

The only way Weller was going to feel satisfied was if he went to see if there was a body under the fort. He told his sister Sarah and the pair of them set off to the old family home. There they moved the fort in the garden and began to dig.

After finding nothing they concluded that their father hadn’t killed Taylor after all and were very relieved. Weller went to grab some beers from the garage and noticed an old tent they used to go camping in. It jogged his memory about a pitch site they used to use called Fort Boone.

Weller rushed to the site and as he dug through the mud he uncovered an old boot that contained a foot and leg bone. Realising his father may well have been telling the truth meant that Taylor was indeed dead. So who is Jane Doe?

Back at the office, Allison (Trieste Kelly Dunn) had discovered that Mayfair had hacked her ankle bracelet tracker. She gave Reade, Zapata and Patterson (Ashley Johnson) a chance to bring her in. Reade and Zapata had previously traced a cell phone for her so headed out to that location.

Once their they found a worrying scene. They could smell that a large amount of bleach had recently been used and also found a bullet casing. Realising they needed more help they decided it was time to let Patterson in on what was going on. She was a little upset that they had been keeping her in the dark. Her analysis of the room uncovered traces of residual blood on the floor.

Patterson took samples back to the office for testing and confirmed that it belonged to Mayfair. Due to the large quantity they knew there was a strong possibility that she was dead. However rather than report their findings they decided they would investigate further as they had already done so much in secret to be in trouble.

Together they wondered if they would find a clue at Mayfair’s home so they went and broke in. A quick look around was enough for Patterson to spot a painting that was different to usual. A closer examination revealed four small stamps on the back which were Chinese Zodiac signs. The signs represented the birth signs of Weller, Reade, Patterson and Zapata. Combined the dates formed the code needed to gain entry to the safe. Inside was a single USB flash drive which of course was encrypted.

It worked and gave them acccess to the drive. It contained three folders, two we’ve heard about – ORION and DAYLIGHT – plus a mysterious third called M7G677. Inside these were all kinds of classified files leaving them to wonder what Mayfair was caught up in.

Meanwhile, Jane decided to go after Oscar with a plan to bring him in for the murder of Mayfair. She broke into his apartment and then paid a visit to Ana, the hacker girl from earlier in the series whose life she saved. She called in a favour with Ana to trace the pizza parlour guy that her and Oscar’s team call.

She then broke into his trailer to wait for him. He returned and activated some kind of gas defence system after realising something was wrong. Jane jumped through a window to escape and confronted him. With some quick thinking she made up a convincing story as to why she needed to find Oscar. He gave her a key to an address to hide at.

Instead she went back to Ana to get her to track down a recent purchase of 50lbs of lye. She suspected that Oscar would be using it to break down Mayfair’s body. It didn’t take long for Ana to find the purchase, giving Jane her next lead.

It took her straight to Oscar and gave her a flashback of when they were in love before he wiped her memory with Zip. She also remembered a mysterious guy named Shepherd who was in charge of them both. Oscar got the jump on Jane and used a taser on her.

When she woke she found herself tied to a chair. Oscar’s plan was to ‘reset’ Jane by wiping her memory for a second time. Due to this he decided it would be ok to give her a bunch of answers that she would soon forget. Jane learnt more about Shepherd and why she was involved in the mission. He also revealed that he had killed the bearded guy, Marcos, who was the best friend of Cade.

He next told her that she was indeed not Taylor Shaw. Patterson had previously uncovered information that Jane was probably born in Africa. However her DNA had matched Taylors which didn’t make sense. Weller didn’t want to believe she wasn’t and Oscar confirmed that they had broken into a facility to swap out Taylor’s DNA for Jane’s.

Phase 1 was brought up again, and Oscar explained that it was to take down Mayfair and get Weller in her position. The plan had been to have Jane posing as Taylor to get close to him so they could control him. Next up was Phase 2 where they would attempt to take down the entire government.

Before Oscar was able to wipe her memory, Jane managed to headbutt him and break free. This started a fight between the pair, during which a lantern was knocked over starting a huge fire. It ended up being a fight to the death and she unintentionally put an end to Oscar with a mean looking scythe. Jane just got out before the fire consumed the building and its contents which included Mayfair’s body.

Back at her apartment she found an angry Weller sat drinking whiskey while he waited for her. As you can expect he was more than a little pissed off. He confessed that he knows she isn’t Taylor Shaw and demanded at gunpoint to know who Jane really is. An upset Jane wanted to try and explain but Weller put her in cuffs and arrested her!

Blindspot will return for a second season in late 2016. Check back soon as we’ll be giving our thoughts on Blindspot season 2.