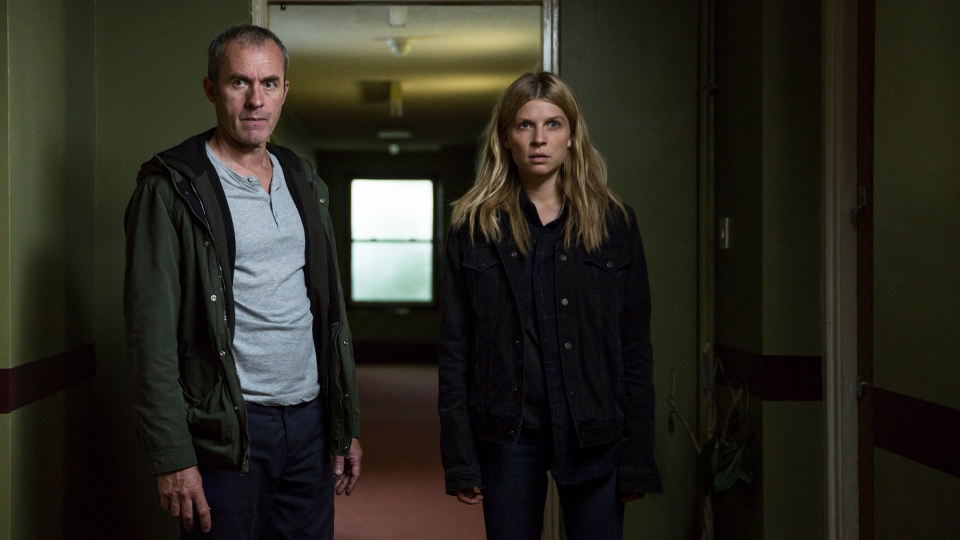 The season two finale of The Tunnel: Sabotage opened up with an angry and upset Karl (Stephen Dillane) sat on one of the crashed plane seats. BB (William Ash) came by and asked how he and his family were. Karl said they were fine and mentioned that the carbon monoxide incident at his home was ‘apparently’ caused by a blocked flue.

Realising that Karl was implying that it was deliberate, BB suggested that it couldn’t be, could it? Karl said he was waiting for someone and then in walked MI5’s Neal Grey (Con O’Neill) with two cups of coffee. Karl went straight to him and accused MI5 of attacking his family and spying on them. He denied the attack but happily confirmed the spying. He told Karl to meet him in his office when he was ready for the truth.

Karl joined Neal who claimed that the carbon monoxide wasn’t MI5 and that it could just be a coincidence caused by a faulty boiler. Neal was upset about what happened with Vanessa Hamilton (Emilia Fox). Karl said he was going after Artem Baturin (Paul Schneider) but Neal pointed out that he had a ‘Get out of jail free card’ in The Chemist, Edgar Branco. Karl realised that a deal had already been made with Artem and threatened to go public if MI5 tried to stop him doing his job.

In France, Elise (Clémence Poésy) came to work and apologised to Louise (Juliette Navis) about her outburst over the tampered phone and Erykah Klein (Laura de Boer) connection. Lousie updated Elise on what she had found, starting with CCTV taken from the phone shop in Hamburg. At the time of the purchase on Erykah’s credit card a man wearing a baseball cap bearing the number 8 was seen. Elise rushed off to check the CCTV from the airport before the plane crash and saw the number 8 cap man there with Erykah.

Erykah returned from Germany and came to visit Elise in her flat. She said she couldn’t wait to see her so came back early and had brought her some books. Elise was upset over the airport footage and questioned her about it. Erykah denied knowing the man in the cap and said she had bought the phone. Realising that she had been found out, Erykah tried to explain.

Elise threatened prison and Erykah pulled a gun on her. She told Elise that she had a spy camera in her flat, had seen her argue with Gael and judged the perfect time to come and seduce her. Erykah threatened to shoot her if she didn’t move and an upset Elise stepped aside. Realising her boss Olivier was on his way round she ran down after Erykah. Outside she saw Erykah shoot him in the leg before driving off.

Karl and Elise visited Olivier in hospital. They concluded that Erykah must be working with the Russians. Elise proposed they find the Chemist and everyone agreed.

Meanwhile, as per the deal with Artem, Gregor Baturin (Constantine Gregory) was released and given armed guard. He was most impressed to find a table football game waiting for him and challenged his French police guards to a match. During the match he collapsed and died. When word got around Artem was convinced that they had gone back on the deal and killed his father.

MI5 put a call out to arrest Artem as soon as possible before he could enact revenge. Artem was warned and fled through the Calais Tunnel maintenance area. He was soon pursued by French police but managed to escape by a helicopter that was sent for him. MI5 summoned Karl and Elise back to the UK.

Erykah met with Artem in Bologne and tried to keep him calm over the death of his father. Artem wasn’t for listening and vowed to give the Chemist to ISIS so they could have access to his Bubonic Plague virus. She ordered him to leave the Chemist and lay low for a short time. She gave him a hotel key and told him that he would be contacted when his exit strategy was in place.

On the way back to the UK, Elise proposed that Vanessa Hamilton was the solution to finding the chemist. She felt that if they could track down his rent boys they might be able to determine his location. BB uncovered the name Thiago who was linked to gang rape and torture. They traced his phone number and BB went to bring him in.

Back home, Karl checked on his family and Laura (Angel Coulby) suggested that the boiler was probably the issue all along. Meanwhile in France, Erykah turned up in Elise’s flat and told her that she did have feelings for her. She kissed Elise and got a slap before convincing her to spend another night together.

The next day, Karl and Elise interrogated Thiago who gave them some sketchy details about the Chemist’s location. He could remember a block of flats, the fourth floor, a spiky plant and a tattoo shop with swallows on the windows.

As they drove around looking for the tattoo shop and flat, Elise told Karl about her night with Erykah. He didn’t judge and told her that he still trusted her. She indirectly apologised for her outburst at him last episode by telling him that he was her best friend.

After finding the tattoo shop they decided to head to a block of flats nearby without backup. Inside they found a spiky plant on the fourth floor but as they went to call for backup they ran into some of the Russian henchmen who pulled guns on them.

Inside the Chemist’s flat they were gaffer taped to chairs at gunpoint and Karl got a smack in the face. Edgar Branco came in and looked them over before calling Koba. He said he wanted them killed immediately. He wanted Karl killed first with a bullet up his ass followed by Elise.

A terrified Karl was pinned to the wall with a gun to his bottom, before the trigger was pulled Edgar spoke up and suggested an alternate plan. He was going to inject them with a virus that would kill them slowly over 3 days. As they decomposed the neighbours would smell them and any emergency services that came would be infected and spread the virus.

Back with Karl and Elise, Edgar was ready with his virus. He chose Elise first and injected the virus straight into her left eyeball and she passed out from the shock. Suddenly the armed police came in and Neal shot Edgar dead.

Elise was taken to hospital and Neal requested that Karl go with him to meet Artem. He thought he was getting away but was arrested for terrorism offences while Erykah was left to go free.

A week later, Elise was recovering and it looked like they had managed to save her eye thanks to getting treatment early. Karl went to see her and updated her on Artem. She was concerned that the trial would be kept secret but Karl was happy that they had their man.

At the end of the episode the case was closed, BB went off with Louise, Karl called home to say he loved his family. Elise had a vision that Erykah was with her, she removed her dressing and although bloodshot her sight appeared to be ok. The season closed with a final shot of the plane wreckage.

Enjoyed The Tunnel: Sabotage and fancy another season? We’ve picked our Top 10 things we want from The Tunnel season 3.