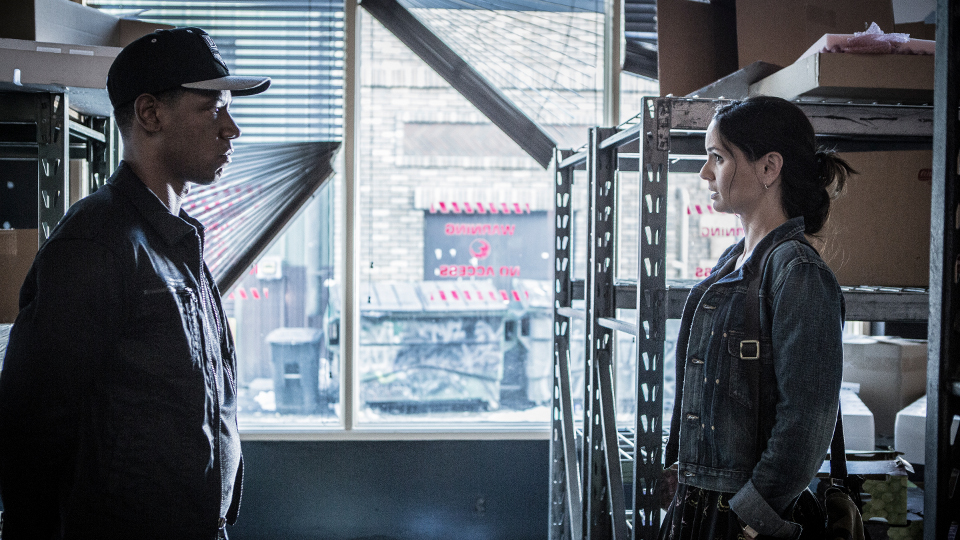 The latest episode of Colony gave us our first proper view inside the mysterious Factory. So far we haven’t found out much about it other than it’s a place people get sent to that you really don’t want to go to.

The episode opened up at the Factory where hundreds of workers dressed in bright yellow plastic suits were busy working away on a variety of machinery. It was soon revealed that Will’s friend Carlos is still alive. After their shift the workers were sat down to eat what looked like bread, fish fingers and mashed potato on the kind of trays you see in schools and prisons.

No one spoke to each other and it looked very much like a prison environment. Suddenly a worker opposite Carlos started coughing up blood all over his own food. Men dressed in red and black immediately appeared and dragged him away into some kind of lift. At night when they were all setting in their bunk beds and the lights went off, Carlos was seen staring out of the window. As the camera panned to the window we got to see the Earth in the distance meaning that the Factory is on the moon!

Back on Earth there was more than a little tension at breakfast in the Bowman household. Will (Josh Holloway) was busy staring at Katie (Sarah Wayne Callies) wondering what she’s up to and Katie felt that something was wrong. Will suddenly decided to tell the kids about their brother Charlie and showed them the photo that Snyder (Peter Jacobson) had given him. Bram stormed out, Gracie was confused and Katie was annoyed. Before he left Will had a dig that there should be no secrets in their house.

Katie went to see Rachel to tell her that she wanted out of the Resistance. Rachel supported her decision and said that she would speak with Quayle. Katie was surprised to learn that Rachel was completely open with her kids about her involvement in the Resistance.

At the office Will received a phone call from Quayle who wanted to meet. He told Will that the leak was Katie. Will went straight out to meet Quayle on a bus. Quayle proposed a deal where he would give up his cell and Broussard but leave Katie out of it. In return he wanted a free pass beyond the wall.

Will told his partner Beau about the meet and the deal. They took it to Snyder who agreed to the deal on the condition he gets to meet with Quayle himself first.

Meanwhile Broussard (Tory Kittles) was meeting with another cell who want to team up for a big mission involving a VIP who is coming to meet Snyder.

At home Will told Katie about the deal to get Broussard, knowing she would get the info back to him. She immediately left to go ‘to work’ and updated Broussard on the plan. He went to Quayle and asked him if he was talking to the Occupation. Quayle denied it and then Broussard gave him the plans for the new mission with the other cell.

Will took Snyder to meet with Quayle. He gave Snyder his list of demands and they came up with a plan to take Broussard.

During the operation to capture Broussard, Katie spotted the Red Hats and alerted him to their presence. She then set off some firecrackers as a distraction. Broussard managed to get away but some of the other Resistance members weren’t so lucky – Rachel was killed. Quayle was also held.

Will decided to go and talk to Quayle who told him some truths about Katie. He then put three bullets in Quayle killing him and the two Red Hats guarding him. Beau seemed to be aware of Wills plan and the pair both told Snyder that Quayle was dead when they arrived and that it must have been Broussard.

Elsewhere in the episode, Bram went to see his school teacher and gave him the telescope lens he had obtained for him. They used the telescope to look up at the moon and discovered a structure on there which they suspected might be a moon base. They would need better equipment to get a better look and Bram suggested a location outside of the Colony wall that they might find some.

At the end of the episode the bodies of Rachel and her sons were strung up with boards reading TERRORIST around their necks. Katie was there to see them and Broussard also showed up to tell her he was leaving for a while. Back home Will and Katie both told each other that they had had good days.

The penultimate episode is Zero Day. Katie and Will are pushed further apart than ever when she makes a stand against his best-laid plans.

Tune into Sky 1 at 9pm on Thursday to watch the episode. Preview episode 9 with our gallery below: