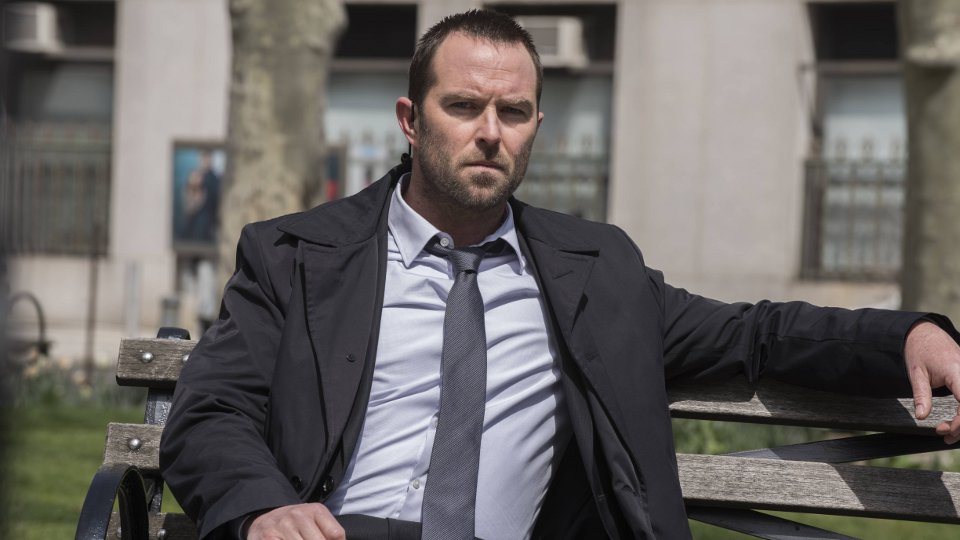 On the latest episode of Blindspot some of the pieces of the puzzle finally started to slot into place.

The team were all present in the building when Matthew Weitz (Aaron Abrams) arrived with his team to clear out Mayfair’s (Marianne Jean-Baptiste) office. After reporting the murder of Alexandra she’d become a suspect.

The entire building was suddenly put on lockdown in an apparent drill. This left Jane (Jaimie Alexander) and Patterson (Ashley Johnson) working out, Weller (Sullivan Stapleton) and Dr. Borden (Ukweli Roach) having a chat, Mayfair and Zapata (Audrey Esparza) in a corridor while Reade (Rob Brown) was stuck in an elevator with his ex, Sarah and a woman suffering with anxiety.

Patterson soon determined that the FBI was being hacked. She and Jane managed to get into the air ducts and conveniently found their way to Weller and Dr. Borden. After hot-wiring her way through a couple of security doors, Patterson got to her computer and discovered the hackers had locked her out of the system and were stealing data.

Patterson suggested Weller and Jane create a large fire to trick the security system to deactivate temporarily. This allowed them to get to a room where the Internet came into the building. Once inside they set to work on severing all the cables.

The hackers were actually in the building in the main server room. They managed to activate carbon dioxide in the room where Weller and Jane were. Patterson had about a minute to talk Weller through hot-wiring the door.

Meanwhile Mayfair and Zapata traded words about Weitz. Mayfair saw earlier that Zapata knew him and asked how. Zapata lied at first but eventually told the truth. Mayfair appeared upset that Zapata hadn’t confided in her sooner.

Weller and Jane climbed another air duct to get to a room containing weapons. They armed up ready to take on the hackers. On the way to the main server room they stumbled upon Mayfair and Zapata who joined them.

At the server room they split up and the female hacker was killed in a gun battle. The male hacker managed to get away with the files and still in the system he was able to open and close the secure doors.

Not knowing his accomplice was dead he demanded her release. To try and secure that he raised all the elevators in the building to the 70th floor. He promised after 10 minutes they would be made to drop which would kill anyone stuck inside them. With Reade and Sarah trapped in one Weller and the team had to think quick. Weller and Jane had to rush up the stairs and were able to use a fire hose to pull Sara and Reade to safety.

Throughout the episode Jane upped her flirting with Weller. He responded with plenty of his own. To celebrate their success at stopping the hack and saving the day they agreed to go out for drinks.

At the end of the episode Mayfair was arrested and then interrogated. The team were invited to watch and we finally got to see the results of Oscar’s missions for Jane. The missions with the pen, the car GPS and the flash drive were all designed to work towards setting Mayfair up and taking her down. Carter’s murder was pinned on her as his body had been placed in a location shown by the hacked GPS.

Mayfair denied everything but so much care had been taken to set her up that it looks impossible for her to survive. Even the money she gave Sofia turned up with her fingerprints on.

Jane looked riddled with guilt but didn’t say anything for now. We’re guessing that she will go and confront Oscar first.

The next episode of the season is If Love a Rebel, Death Will Render. When an abandoned child is found with a tattoo identical to one of Jane’s, the team must scramble to save dozens of newborns.