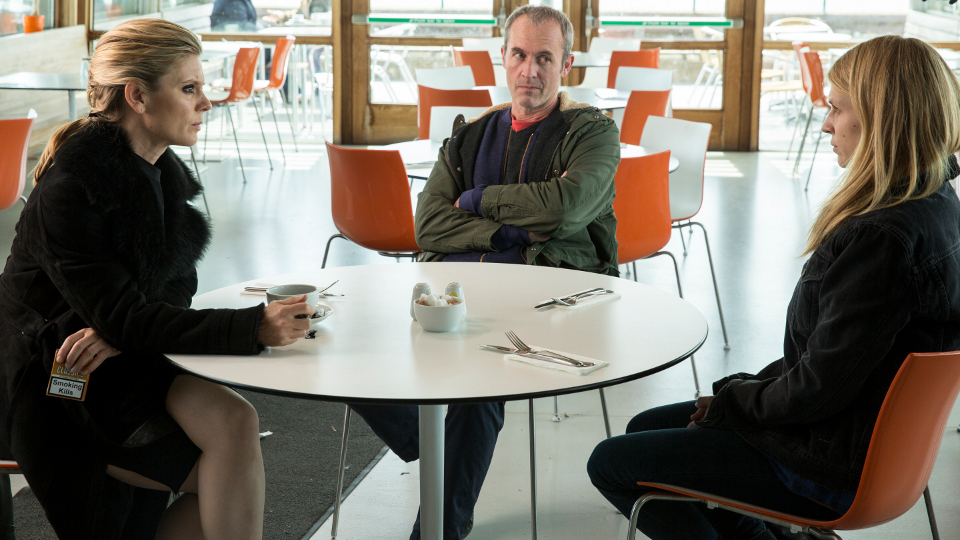 The latest episode of The Tunnel: Sabotage opened up with Vanessa Hamilton (Emilia Fox) bringing a young Brazilian male to a mysterious German doctor. This looked like a regular arrangement and the doctor injected him with a concoction of drugs. He offered some to Vanessa who seemed tempted and after she left he started to strip the Brazilian, presumably to abuse him.

Karl (Stephen Dillane) and Elise (Clémence Poésy) met at the aircraft wreckage. Karl wished her a Happy Birthday (which she never celebrates) and she asked how things were at home. Karl then played her the recording of Rosa, they had realised that she said ‘Koba’, a Georgian name. They identified a link between the Polish detective on the downed plane and an imprisoned Georgian arms dealer called Grigor Baturin.

The pair then visited Erykah Klein to run some names past her and she was able to help with details on some of them. Elise felt awkward as she had made friends with Erykah and wanted to leave straight away. Erykah appeared to be withholding some information but pointed them at a judge who could help. He pointed them at Artem Baturin, the lawyer and son of Grigor.

Robert Fournier (Johan Heldenbergh) and Koba shared some food and then it was revealed that Koba is Artem. Koba wanted Robert to lie low but Robert wanted to continue his work.

Koba offered Robert a beer and he accepted. Before getting the beer Koba made a call to Vanessa and told her that there was a change of destination. Instead he wanted to arrange Robert a ‘trip to the Maldives’ which is code for sending him to the German drug doctor.

Before Koba returned Robert had fled the house, stolen a car and was driving away at speed. He was pretty pleased with himself thinking he’d got away until another vehicle smashed into his, flipping it onto the roof. It was Koba and his men, they dragged a stunned Robert out of the car and put him in the boot of their vehicle.

Robert was shipped off to the German doctor who injected him with some nasty virus. When he didn’t die quickly he pumped him full of more drugs to speed up his death.

Elsewhere in the episode, Karl and Laura (Angel Coulby) continued to fight. They eventually spoke and talked about Adam’s murder before Laura thought of something and left abruptly with no explanation.

Elise met up with Erykah for a drink. Despite not being a fan of drinking alcohol she agreed to some champagne when she revealed it was her birthday and got a bit drunk. Erykah walked her home and the next day was questioned again about Grigor Baturin by Karl and Elise.

Karl confronted his boss, Inspector Bowden (Stanley Townsend), again about Vanessa Hamilton. He’d previously told Karl to stay away from her. Karl insisted and when asked what he’d do if there was a conspiracy, Karl told him that he’d tell the world and only killing him would shut him up.

Later Karl was left a USB thumb drive at home by Bowden. It contained classified files related to Vanessa and Karl met with Elise to discuss. It explained more about Vanessa and the links to Georgia.

At the end of the episode as BB (William Ash) left work he spotted something in the car park. Upon closer inspection he found it was the body of Robert Fournier tied to a wagon. Around his neck was a sign that read ‘Bring out your Dead’.

On the next episode of The Tunnel: Sabotage, the team are forced to strike a deal with Vanessa. Meanwhile, someone tries to warn Karl off the case and Elise crosses a line she may quickly come to regret.