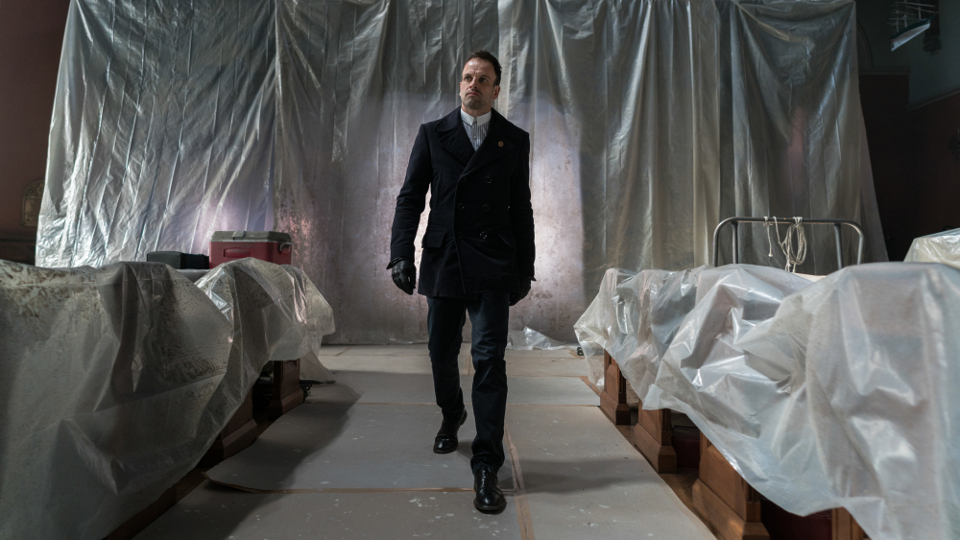 The latest episode of Elementary returned the focus to Morland as Sherlock (Jonny Lee Miller) and Watson (Lucy Liu) tried to work out who was behind the assassination attempt.

Last episode had teased the return of Moriarty but this episode opened up with Sherlock believing that she wasn’t directly involved. Instead he suspected that she had passed her role onto someone new.

Normally Sherlock would be straight to the NYPD to report his findings. However knowing how dangerous the organisation was he decided it might be safer to keep things between himself and Watson initially.

The situation changed when a bomb was brought into Morland’s workplace. It was disguised as a water delivery and the assassin shot two employees dead before exiting the building. He then remotely detonated the bomb and drove off. It was meant as a warning to Morland.

Morland went into hiding and released a statement that he had travelled to Malaysia on business. Holmes tracked him down to a safe house where he explained how dangerous Moriarty’s organisation was. In return Morland explained that he thought a man named Kraznov was behind the bombing. Sherlock requested his father stay put while he worked out what was going on.

Sherlock researched the clues and turned up the name of a professor called Joshua Vikner (Tony Curran). He found a photo of him stood next to a painting and realised that the style was the same as Moriarty’s work. He deduced that this could well be the man now in charge.

Sherlock and Watson broke into his University office and waited for him. When he arrived he wasn’t even surprised to see them and confirmed their suspicions. Their next job was to try and link Kraznov with Vikner so they brought Kraznov in for questioning.

Morland went against Sherlock’s advice and turned up at the Brownstone. He demanded to know who was in charge of Moriarty’s organisation but Sherlock refused to tell him.

Vikner surprised Sherlock by arranging a meet at the funeral of one of Morland’s employees. He offered a peace deal that he wanted Sherlock to broker with his father but Sherlock knew his father would never agree.

The NYPD were able to link Kraznov with a robbery at a chemical plant and were going to detain him. Before they could a cop shot him dead and killed himself. Sherlock discovered that the cop had taken the online Dante survey, from the previous episode, and flagged as a psychopath.

At the end of the episode as Sherlock and Watson returned to the Brownstone, Sherlock sensed that someone might be watching them. They entered via the back door and discovered that a bomb identical to the one at Morland’s offices was waiting for them.

The season finale of season four is A Difference in Kind. Holmes and Watson’s lives are threatened by an influential, worldwide criminal network connected to the murder attempt on Morland Holmes (John Noble). Also, Sherlock’s grievances with his father threaten their alliance to bring their mutual adversary to justice, on the fourth season finale

Tune into Sky Living at 10pm on Thursday to watch the episode. Preview episode 24 with our gallery below: