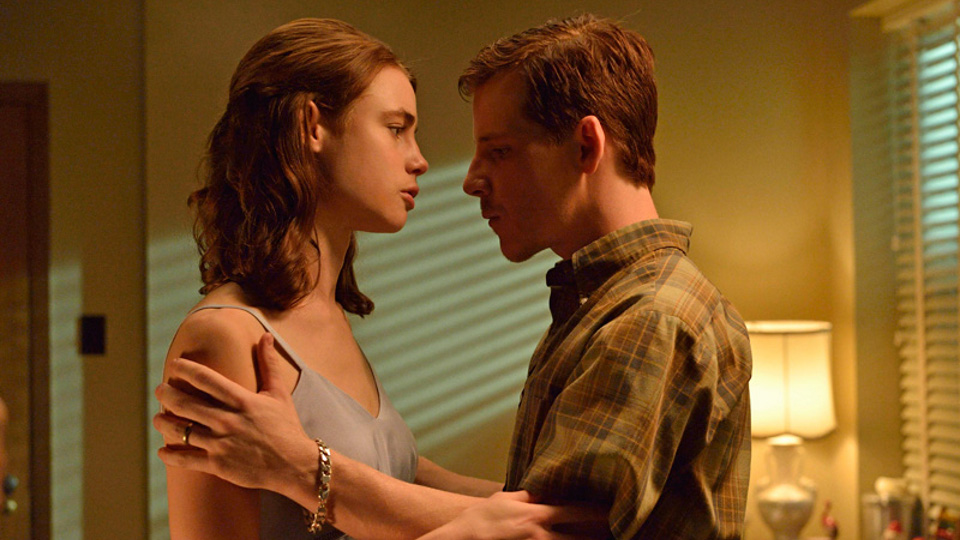 The latest episode of 11.22.63 opened up six months later on the 16th October 1963 with just over a month until the Kennedy assassination.

Lee Harvey Oswald (Daniel Webber) went for an interview at the Dallas book depository which is where it is thought he shot JFK from. He impressed and was given the job.

As he left the interview there was an FBI agent waiting to talk to him. During the conversation we learnt that since the previous episode Oswald had split from his wife Marina and had been travelling.

Oswald walked off and went to visit a heavily pregnant Marina who has moved out to live with a friend. He told her about his new job and begged her to come back. She said she would think about it and walked away from him when he got angry.

Jake (James Franco) went to visit Bill (George MacKay) to tell him that Oswald had got the book depository job. Bill wasn’t happy that Jake doesn’t come to see him all that often but Jake said he was taking care of Sadie (Sarah Gadon).

Jake spots George de Mohrenschildt arriving at Oswalds and they listened in on the conversation. George was talking to Lee about General Walker getting shot. They still haven’t heard anything about plans for JFK.

Bill wondered if maybe they had already changed time enough that JFK would no longer be killed. Jake wasn’t convinced so Bill suggested they just kill Oswald now. However Jake wasn’t keen on killing him at all, having already killed two people. He proposed that maybe they could just kidnap Oswald instead ahead of the assassination day.

Jake returned home to Sadie to find her beating Principal Simmons (Nick Searcy) at cards. Before he leaves he tells Jake that he should marry her. Sadie was still recovering from her ordeal and now has a large scar down the side of her face. She told Jake that she’s going in for her final surgery the next day and is scared about it.

Jake headed to school to talk with Ms. Mimi (Tonya Pinkins). She asked about Sadie and they talked about the Principal’s suggestion of marriage. She then told Jake that she has cancer, a tumor the size of a lemon, and doesn’t have long left. She requests that after she’s gone that he be a friend to Simmons and marry Sadie. She tells him not to wait.

To pay for Sadie’s surgery Jake placed a large bet. He then went back to Bill’s place but found it empty. Listening in on the recorder he discovers that Oswald is holding a birthday party. He then gets a surprise when he hears Bill and Marina talking.

Jake went up to the party in search of Bill. Jake was even more surprised to find out that everyone there knows Bill. He then saw Bill and Oswald laughing and having a drink together. Jake pulled Bill aside and warned him he was messing things up. Bill disagreed and said he felt he was making things better and that by being closer to Oswald he had got to know him.

George de Mohrenschildt arrived and Jake tried to force Bill to leave. Bill refused to go and they accidentally knocked a lamp off a table. Oswald picked it up and discovered one of their bugs inside and presumed it was the FBI. He lost it and started trashing the apartment before storming out.

Jake went back downstairs to Bill’s while Bill stayed to help clean up. Through the window Jake spotted Bill and Marina kissing. When he came back inside the pair had a fight. Bill eventually pulled a gun on Jake and warned him to stay away or he’d kill him.

Oswald went to a shooting range to get in some sniper practice. He didn’t have enough money to pay but offered to rake the grass to collect spent shells. During the practice we got to see that he was an excellent shot.

Back at home Jake told Sadie what had happened and she suggested he go to the police but he refused. Simmons turned up to take Sadie to the hospital. There she wanted to know something about the future so Jake told her about mobile phones.

As Sadie went in for surgery the mysterious Yellow Card man showed up and followed her in. Jake spotted him and felt something was wrong but couldn’t get through some locked doors to get to her. Instead he smashed his way through while Simmons watched on in horror. Jake managed to stop the operation just in time as there was a problem with the oxygen levels on the equipment.

Back at Bill’s Jake spotted him sat on the porch with Oswald. He was checking out Oswald’s rifle and Jake muttered ‘The second shooter’ to himself. Once Oswald had gone Jake went to Bill and told him that Marina was having the baby at hospital. He said she was all alone and asking for Bill.

Bill agreed to go with him not realising that it was a trap. Jake took him instead to the mental hospital where he had him committed. Bill tried to flee and then fight his way out but was sedated. Jake’s story about Bill needing help was validated when he started rambling on about Jake being from the future. Jake signed forms that meant Bill could only be released if he gave permission.

Jake’s next step was to track down George, who he found passing documents to Oswald. He followed George and hid in his car when he went into a flower shop. When George got back in he interrogated him with the help of a garrote. He revealed he wasn’t involved in a plot to kill Kennedy and that he gave money to Oswald for Marina.

A flashback to a conversation with Al revealed that if George didn’t recruit Oswald then Oswald must have been working alone. This meant he must kill Oswald.

Jake called Sadie from a phonebox to tell her and proposed to her over the phone. He asked that she also come to the future with him once it was all over. She promised that she would give him an answer when he got home.

After the call Jake was set upon by the bookie who he made his large bet with for Sadie’s treatment. He brought along four friends and they beat Jake unconscious. The episode finished with Jake in hospital with a worried Sadie by his side asking how long it would take for him to recover.

The next episode is Soldier Boy. The end is near, and Jake is not up to the task. Sadie scrambles to pick up the pieces, but no one knows the mission as well as Jake.