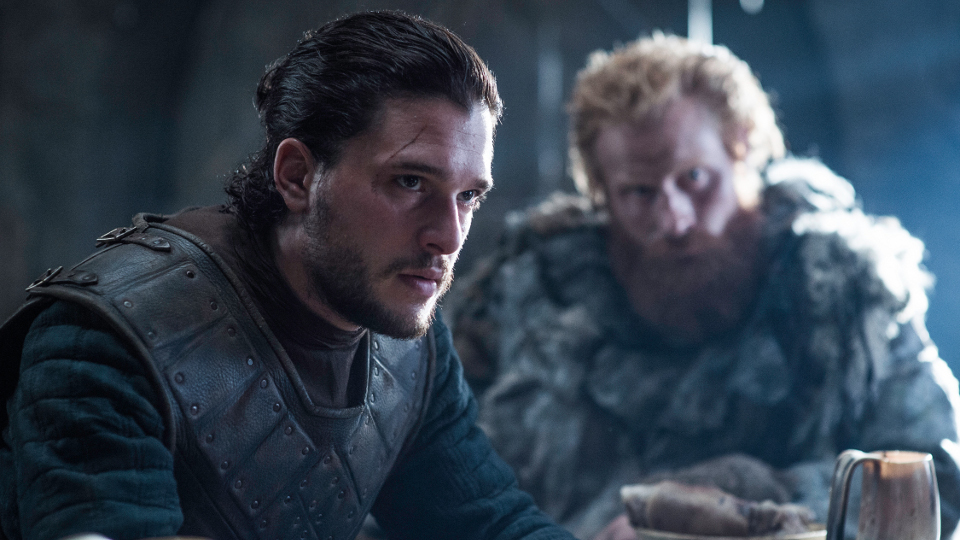 Game of Thrones season 6 continued with its fourth episode, Book of the Stranger (read our recap).

If you’re not up to date on the Game of Thrones TV show and like to avoid spoilers (you have been warned) we suggest you don’t read any further. Below is information we’ve taken from the episode 5 preview trailer as well as speculation about what we think might happen.

The fifth episode is written by showrunners David Benioff & D. B. Weiss with Jack Bender in the director’s chair for the first time. The episode is titled The Door. The synopsis for the episode is:

Tyrion seeks a strange ally. Bran learns a great deal. Brienne goes on a mission. Arya is given a chance to prove herself.

Watch the official preview trailer from HBO for episode 5 below:

The trailer opens up with Littlefinger (Aiden Gillen) turning and saying ‘Sansa’. It looks like he’s turned up at Castle Black. Sansa Stark (Sophie Turner) is stood with a very annoyed looking Brienne (Gwendoline Christie). Sansa asks him if he knew about Ramsay. If it were any other character we’d be expecting them to die but Littlefinger always has a devious plan. We’re expecting he’ll be able to offer up the Knights of the Vale to help if he is spared. What mission could Brienne be going on?

At the House of Black and White we see Jaqen H’ghar say ‘Does death only come for the wicked and leave the decent behind?’. The synopsis says Arya is given a chance to prove herself, in the trailer she is handed some kind of vial. Could she finally be finished with her training?

At the Iron Islands it’s time to choose a successor as Balon Greyjoy was murdered. Yara (Gemma Whelan) is seen staking her claim to the Salt Throne. Surely it won’t be that straightforward and we know that Balon’s brother, Euron, is back. Maybe Theon (Alfie Allen) will have something to offer his sister?

In the Throne room in Meereen, Tyrion (Peter Dinklage) and Lord Varys (Conleth Hill) are being spoken to by the mysterious Red Priestess Woman. She is heard to say ‘Knowledge has made you powerful, but there is still so much you don’t know’. Could she be the strange ally mentioned in the synopsis?

The final scene shows Bran Stark (Isaac Hempstead Wright) having another warging session. He’s seen walking toward the White Walker army as Meera Reed (Ellie Kendrick) is seen desperately trying to wake him up. As the preview trailer ends a very worried looking Bran turns his head to come face-to-face with the Night’s King. Could he be seeing the future? Is he warging without permission?