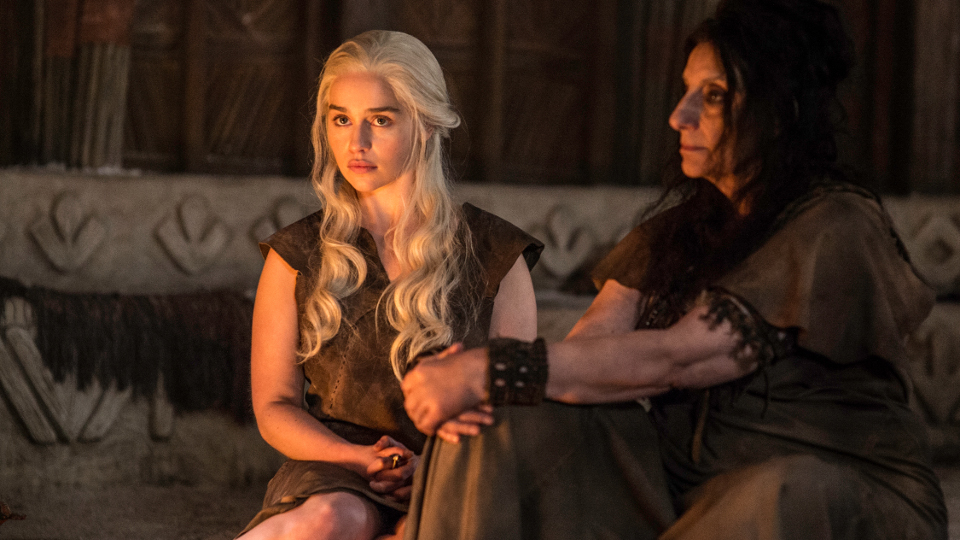 The third episode of season six continued the blistering pace of the season and let us see what happened after Jon Snow’s (Kit Harington) resurrection. Fans were also treated to a fantastic flashback with the Tower of Joy scene.

We mentioned our predictions for the fourth episode in our Book of the Stranger preview.

Episode four spent significant chunks of time with just a few characters but managed to move the story along in a huge way. It really set a lot of things in motion for the rest of the season.

It opened up at Castle Black as Jon Snow donned his Stark armour and packed his things ready to leave. Dolorous Edd (Ben Crompton) asked him where he would go and Jon joked that he would head south to get warm.

Before he had finished getting his stuff together there was an arrival at the gates. They opened and in rode Sansa Stark (Sophie Turner) accompanied by Brienne (Gwendoline Christie) and Podrick (Daniel Portman). Tormund (Kristofer Hivju) the Wildlings and the remainder of the Night’s Watch stood interested at their arrival.

As Sansa dismounted, Jon walked out and couldn’t believe his eyes. In an emotional scene they stood silently for a moment before embracing. It’s been a terrible journey for Sansa to get to this point so it’s nice to see things going her way for a change. They went inside and caught up over hot soup. They chatted about memories of Winterfell when they were younger.  Sansa asked Jon to forgive her for how horrid she was to him in the past and he did.

Jon said they would stay together from now on but Sansa had other ideas. She wanted to re-take their home, Winterfell, back from the Boltons. Jon said he was tired of fighting but Sansa requested his help. She also vowed to take it back herself if she had to.

Meanwhile, Ser Davos (Liam Cunningham) and Melisandre (Carice van Houten) had a catch up of their own. He asked her want she would do now and she said she’d do whatever Jon commands. She now believes that Jon is the Prince that was promised.

Davos said she’d said that about Stannis. He also wanted to know more about what had happened to Stannis and Shireen. Before Melisandre could answer they were interrupted by Brienne. She told them she knew about the blood magic they had used to kill Ser Renly. She also said that Stannis had admitted it to her before she had executed him.

In the Vale, Littlefinger (Aiden Gillen) made his first appearance of the season much to the delight of Robin Arryn (Lino Facioli). Littlefinger brought him a grey falcon for his birthday. Less impressed to see him was Yohn Royce (Rupert Vansittart) who asked him about Sansa.

Littlefinger explained that the Boltons had captured her and must have been told of his plans, implying it was Royce who told them. He also explained that she had since escaped and needed their help. Littlefinger was able to easily manipulate Robin. At first it looked like Royce might be going out the moon door but they agreed to give him a second chance. It looks like he’ll be leading the Knights of the Vale to help against the Boltons.

Across the Narrow Sea, Tyrion (Peter Dinklage) set to work on taking control of the city. He arranged to meet with the Masters to negotiate as Lord Varys (Conleth Hill), Grey Worm (Jacob Anderson) and Missandei (Nathalie Emmanuel) looked on.

Tyrion is a master of politics and he was on a quest to keep everyone happy and to find a way towards peace. He suggested that the Masters move to a new system of no slavery but gave them 7 years to ween themselves off it. He also said they would be heavily compensated for complying.

He also demanded they stop all and any support they were providing to the Sons of the Harpy. He left the Masters with a selection of women to entertain them.

Next he headed for the Throne room where there were a crowd of citizens waiting to talk. They were angry at Tyrion, a stranger, being in charge and upset at the negotiations with the Masters. Tyrion explained he was the Queen’s adviser so ruling in her stead. He said she would return soon.

They also quizzed Grey Worm who told them he was a soldier and Missandei. She used a quote from Tyrion to calm them saying that a wise man had once said people should make peace with enemies not friends.

Jorah (Iain Glen) and Daario (Michiel Huisman) arrived at Vaes Dothrak to try and save Daenerys (Emilia Clarke) from the Dothraki. Daario was teasing Jorah because he had slept with her and also called him an old man.

As they surveyed the city, Jorah suggested that Dany would be held in the temple of the Dosh Khaleen. It is forbidden to carry weapons in the city so he made Daario leave them all behind. As they were de-arming Daario spotted Jorah’s Greyscale for the first time.

As night fell they snuck into the city to try and find Dany. They ran into a couple of Dothraki men who questioned them for being there. They didn’t believe their story that they were merchants and a fight broke out. Daario chased one of them down and snapped his neck.

Jorah was left with the bigger of the two and took quite a beating. As the life was being squeezed out of him, Daario returned and put his knife through the heart of Jorah’s attacker. He then smashed his body with a large rock to cover up that a weapon was used.

While this was going on, Dany was sat with the widows, learning about them and gaining their trust. She said she needed to go to the toilet and a girl named Ornela (Hannah John-Kamen) was told to go with her. As she asked Dany about her dragons Jorah and Daario grabbed the girl. They wanted to take Dany with them but she had a better idea.

In King’s Landing, Margaery (Natalie Dormer) was taken before the High Sparrow (Jonathon Pryce). After a chat, where he quoted from the Book of the Stranger, she was allowed to see her brother Loras. He was in a bad way and asked Margaery to help make it all stop. She told him to stay strong.

Elsewhere Maester Pycelle (Julian Glover) tried to give King Tommen (Dean-Charles Chapman) some advice. This was interrupted by the arrival of Cersei (Lena Headey). She sent Pycelle away and spoke to Tommen.

He told her that he had spoken to the High Sparrow and that they needed to be careful not to anger him. He was worried for Margaery’s safety and told his mother a secret that he had been told not to tell anyone.

Cersei and Jaime Lannister (Nikolaj Coster-Waldau) went again to the Small Council where they spoke to Olenna Tyrell (Diana Rigg) and Kevan Lannister (Ian Gelder). Cersei told Olenna that Margaery was going to be made to repent her sins. They both agreed that this could not happen. They suggested a plan that they Tyrell army be brought in to destroy the Sparrows.

Theon (Alfie Allen) arrived back at the Iron Islands where he was met by his very angry sister Yara (Gemma Whelan). She was still upset over the rescue mission where she lost men when trying to save Theon. He apologised for betraying her and told her that he wasn’t back to be King, instead he wanted to help her rule.

At Winterfell, Ramsay Bolton (Iwan Rheon) called for Osha (Natalie Tana). He asked what use she was to him and she explained she wasn’t loyal to the Starks. She attempted to distract him by trying to seduce him. Osha then reached for a knife to put an end to Ramsay. Before she could stab him he put one through her throat and left her dying on the ground as he finished eating an apple.

Back at Castle Black a letter arrived for Jon Snow. It had a flayed man seal meaning it was from the Boltons. In the letter Ramsay taunted Jon and told him to come and see Winterfell, he said he held Rickon Stark (Art Parkinson) prisoner, had killed Shaggydog and wanted Sansa back. If he gave him Sansa he promised to leave Jon alone.

The episode ended with Dany as the Dothraki tried to decide what to do with her. As they discussed she decided to give them her own opinion. This took them by surprise and they laughed in her face and threatened to repeatedly rape her when she suggested that she would lead them.

Dany knocked over the burning braziers knowing that the Dothraki men would not be able to escape. They burnt alive and the whole building went up in flames. As the doors opened a naked Dany walked out unharmed due to being immune to fire. The whole of the city gathered round and knelt before her.

Let us know your thoughts on Book of the Stranger in the comments below as well as your hopes for the rest of the season.

Already looking forward to the next episode? Read our preview of Episode 5 ‘The Door’.

View more images from Book of the Stranger in our gallery below: