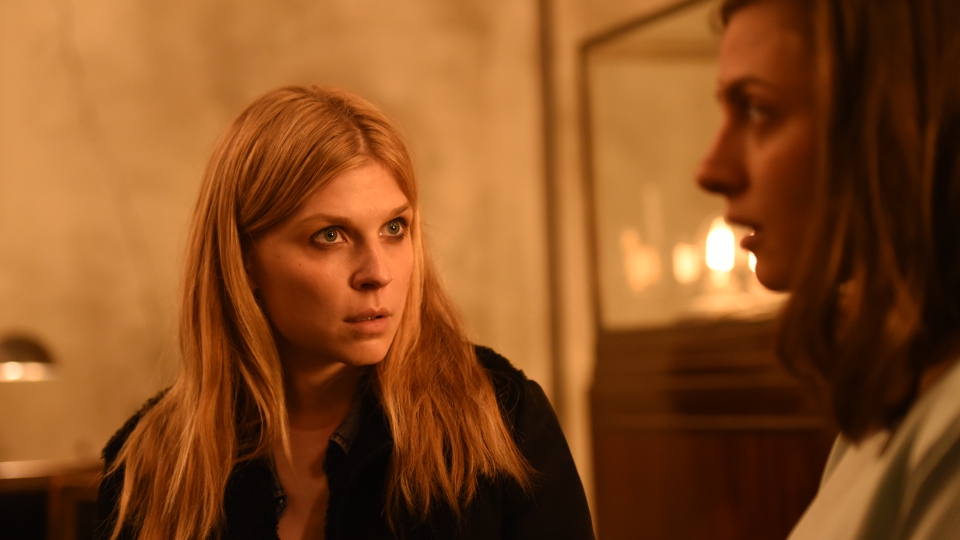 The latest episode of The Tunnel: Sabotage opened up with the French forensics team combing through the aftermath of the Calais Police Station attack.

They interviewed the hostages and witnesses to try and uncover any new evidence that they may have missed. One hostage remembered that one of the terrorists had been using a mobile phone to make several calls. They also confirmed that Robert Fournier (Johan Heldenbergh) wasn’t at the Police Station for the attack.

The search team eventually found the phone dropped down one of the toilets. They took it away as it was a priority to get it working again to try and trick Fournier into thinking one of his accomplices was on the run. They put out a radio statement to say one gunman had escaped.

Lieutenant Louise Renard (Juliette Navis) spoke with Elise (Clémence Poésy) and told her that Garrido (Eric Savin) had not mentioned the terrorists in his suicide note. They had also discovered that he had served in the army with Thibaut in Africa. Thibaut had been discharged on medical grounds and became a heroin addict. During a 3 month spell in a Belgian rehab centre he had crossed paths with Fournier.

At the hospital Elise and Karl (Stephen Dillane) were happy to hear that Julie (Fanny Leurent) had survived her shooting. Rosa (Hannah John-Kamen) had also survived so they went to question her.

Karl sat on her bed and tried to talk to Rosa but she pretended to be asleep. He eventually got a reaction out of her by saying her friends were dead and pushed for an answer about Fournier. She whispered quietly that there were more of her group. She said it so quietly that Karl let himself get really close and she sat up and sunk her teeth into his arm. Elise had to fight her off to get Karl free.

Outside Rosa’s room they ran into her father Sonny Persaud (Clarke Peters). He said he was concerned about her and was obviously torn between her being his daughter and a terrorist. Karl urged him to do the right thing and help them if he could.

Back in the UK, after successfully getting the phone working the police were also able to see that the phone had made 3 calls to a number that was presumably Fournier. His phone was logged as off the Kent coast during the Calais raid so they guessed he was in a boat.

In the UK the police put out an appeal to the public to look out for unregistered vessels. At a boatyard a woman saw the appeal and investigated a suspicious looking boat. Fournier was hiding inside and didn’t answer her calls so she announced she was going to board and he killed her.

He tried calling the phone and the police answered it and tried a trace. Fournier immediately knew there was something up and ditched his phone off his boat into the water. The police were able to trace it within a 10-mile radius so Karl and Elise went to investigate the boatyard.

Elise thought she spotted Fournier near one of the boats, as they went to investigate there was a splash. Presuming he’d jumped overboard, Karl leapt in but was met by the body of the murdered woman. Elise went to investigate the boat and found blood and Fournier managed to sneak to the front and lower himself into the water. As he swam away Elise rushed to see but only saw the woman’s body and had a vision of her dead twin sister drowning.

Fournier escaped and made a call on a different phone to another of his contacts. Meanwhile, Sonny agreed to talk to his daughter after some advice from the French police. Rosa was unwell and at risk of septic shock. Her father tried to push her to give up Fournier but she just messed about and said he would come and get her father.

Sonny told her talking now might be the only chance she had to get heard. Otherwise everything her group was working for would have been for nothing. He started bad-mouthing Fournier and called him sloppy. This angered Rosa who confessed, to the listening police’s delight, that Fournier had downed the plane for what sounded like ‘cobra’ and then she passed away.

Elsewhere in the episode Laura (Angel Coulby) went for an interview and met a new friend. She came to see her at home later rambling on about her son’s dad David who left them. She showed Laura a picture of David who turned out to be Karl when he was younger and working undercover.

Karl decided to bring in Vanessa Hamilton (Emilia Fox) due to her connection to Fournier. During her interrogation Karl’s boss, Inspector Bowden (Stanley Townsend) came and told him to stop investigating her citing national security and an MI6 investigation.

Elise also received a package from Eryka Klein, the assistant who didn’t get on the plane. It was a book titled ‘Deux pour une‘ by German author Erich Kästner. It’s known here as Lottie and Lisa and tells the story of twin girls separated when young who meet again when they are older and swap places. It was adapted into The Parent Trap.

Eryka wanted to be friend’s with Elise. At the end of the day she called Eryka and arranged to meet up for drinks.

At the end of the episode Fournier climbed out of the boot of a car and walked towards a huge mansion. Inside were some men playing video games and one stood up to embrace Fournier when he spoke his name, Koba.

On the next episode of The Tunnel: Sabotage, an anonymous package gives Karl his biggest breakthrough in the case yet. Plus, the investigating team receive a clear and violent warning.