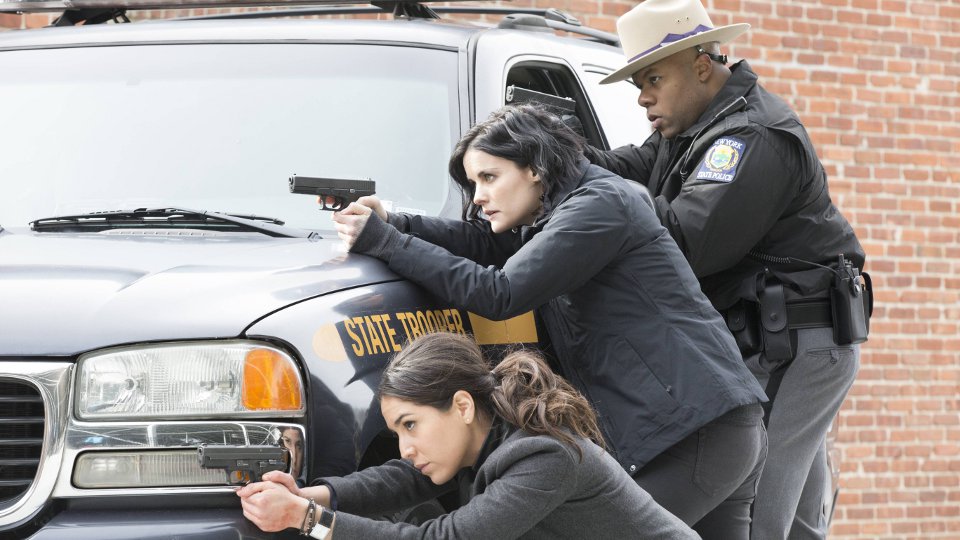 The latest episode of Blindspot saw the return of Rich Dotcom who the team locked up back in episode 9. He started the episode still in prison and got himself a severe beating after cheating some other inmates at cards.

Allison (Trieste Kelly Dunn) spoke to Weller (Sullivan Stapleton) and Jane (Jaimie Alexander) about his beating because he said he wanted to talk to only them. He claimed that he could lead them to Shohid Ahktar, one of the world’s most-wanted terrorists who was responsible for bank-rolling many groups.

Getting to Ahktar wasn’t going to be an easy task but Rich had come up with a plan. He knew that Ahktar loved getting his hands on art that isn’t for sale. He also knew where the team could find a bunch of paintings that were stolen from a museum and worth half a billion dollars.

Rich needed it to look like he’d escaped prison in order to get to Ahktar. In return for his help he agreed a deal that would see him returned to a lower security prison. The team agreed and set things in motion.

Once out of prison with his deal signed, Rich revealed that things were going to be a lot more complex than he’d told them so far. The paintings he wanted to use to tempt Ahktar would need to be stolen back as they were being held in a secure room by the guy who stole them.

The room was in the middle of his house, with no windows and thick concrete walls. The route through the house to the room required his special wristwatch that deactivated the alarms as he moved through the house. There was also a 12-digit digital lock on the door to the room along with a heat-sensitive palm scanner.

To make things even more complex, each painting was held to the wall by five wires. Tripping a wire would set off a shotgun behind each painting that would damage the painting and likely kill the person trying to steal it. A final complication was that the owner carried a kill-switch around his neck to remotely trigger the incineration of the room should he sense a problem.

Before agreeing to meet Ahktar wanted to see one of the paintings at random in order to inspect it to ensure it was genuine. This mean Weller and the team would need to steal all of the paintings. Rich was able to make things a little easier as he’d been planning the raid for a long time. He also possessed a special glove he’d make that would allow them to bypass the hand scanner part of the door lock.

Before the raid the team leaked some gas into the apartments air vents. They then intercepted the call to the gas board and Reade turned up as a gas engineer to help. He was wearing a special device that was able to clone the wristwatch.

The team began the raid when the owner was giving a lecture. They made it to the room without any problems and entered the 12-digit code. However there was an unexpected problem when the hand scanner had been replaced by a retinal scanner. With the help of Patterson (Ashley Johnson) they cut the power to the building and gained access to the room. This alerted the owner who cancelled his lecture to head home.

Before the owner returned they managed to disarm all but one painting. As Weller and Rich were deactivating the last one the owner burst in, brandishing a samurai sword. Jane and Allison had to fight him until Weller decided to take his chances, he yanked the painting from the wall and killed the owner with the shotgun blast. The painting was left with a hole in it.

Rich called on the help of a friend who could restore the paintings. He arrived and said he needed to scan each one in order to restore the damage. Rich arranged the meet which was to be during a Gatsby party at a fancy hotel. He also chose Jane to accompany him to the meet.

At the party they discovered that it wasn’t Gatsby after all. They met with Ahktar who was off his face on cocaine, while dancing around shooting gold-plated pistols. He announced that the paintings were fake but the building was soon stormed by the ISI and FBI. Ahktar escaped and shot Rich in the leg before engaging in melee combat with Jane. She eventually knocked him out.

Jane then turned her attention to Rich who had climbed onto the edge of the roof and was threatening to jump. The team arrived and tried to talk him down but he leapt off. As the team watched in horror he opened a parachute that had been concealed in his chute. He landed by a car where his friend who restored the painting was waiting. It turns out he’d actually made fakes of all the paintings and stolen the originals.

Elsewhere on the episode, Allison requested some space from Weller after she felt there was something between him and Jane. Weller then took Jane to meet his father in hospital. Jane began implementing Oscar’s (François Arnaud) plan to get closer to Weller by pretending to remember things from their childhood.

At the end of the episode Mayfair left work and got into her car. She arranged another meet with her new girlfriend Alexandra. After the call she realised someone was in the backseat and it turned out to be her ex-lover Sofia Varma who we were led to believe was dead after committing suicide.

The next episode of the season is In the Comet of Us. An investigation into one of Jane’s tattoos takes an unexpected turn when the team become involved in a shooting on a college campus.