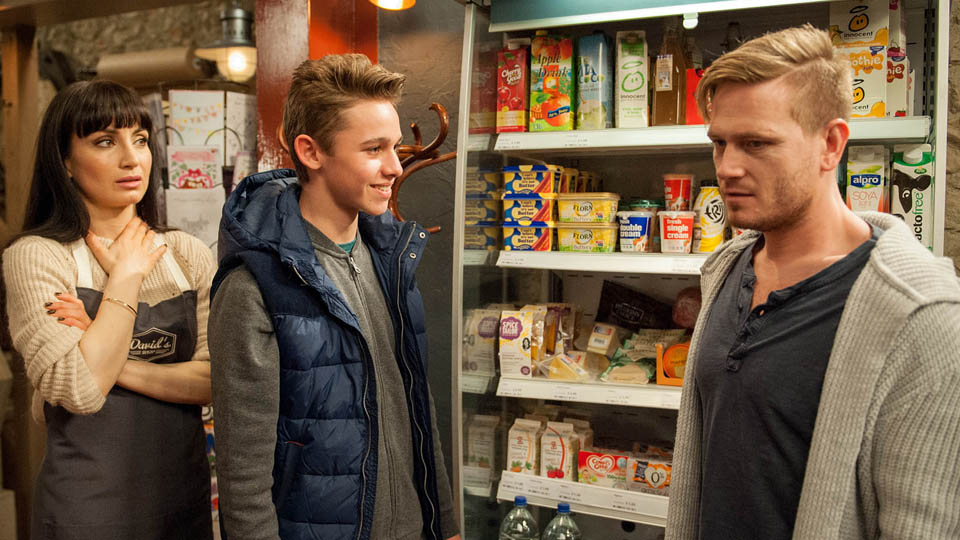 Welcome to our weekly look ahead to what’s happening to your favourite characters in Emmerdale this week…that is if you’ve gotten over the sight of Jimmy naked bar an apron!

David tries to hide his operation and cancer from Jacob

David is frustrated in hospital as the nurse tries to keep him from getting up and about after his operation.  Meanwhile, Leyla is still making excuses to Jacob why David might not be at his important football match.  Eric goes to the hospital and is alarmed to find David’s bed empty and his clothes missing.

Back at the shop, Leyla is stunned when David walks in, much to the delight of Jacob, but can he really hide his operation from him?

Later, Tracy catches Jacob on the laptop threatening to use Eric’s credit card to buy a flight back to Portugal.  She calls his bluff and tells him to go, if he doesn’t mind hurting people and he storms out, leaving her wondering if her plan will work.   Eric is fuming when he learns what Jacob has been up to, but relieved when he walks in.  Jacob seeks solace when Emma agrees to chat to him about his worries for David.

Ashley is left shaken when he gets a call from the hospital to say that Edna has passed away.  He covers to Arthur and Sandy and the latter is worried about Ashley’s strange behaviour until they see him return home with Tootsie and he delivers the devastating news.  It turns out that Edna had confided in Ashley about her illness and asked him to keep it secret which leaves Sandy angry with his son as he’s been denied the chance to say a proper goodbye to her.

Pearl reads Edna’s diary and Laurel is touched by the kind words she uses to describe Ashley, but he just doesn’t recognise the person she’s written about.  Ashley finds Sandy in the church and he says he feels close to Edna which makes Ashley consider his own faith but he can’t pretend his faith has returned.   Laurel asks Harriet for help and she talks to him about the dementia support group; he’s unimpressed.

Aaron gives Liv reassurance that he’s there for her and she can depend upon him but she’s not happy when he refuses to give her any more money.  Chas is furious when she catches Liv going through her stuff and tells Aaron he needs to give her a talking to.  Aaron’s week gets worse when the police arrive and tell him that Liv has been caught shoplifting.

Meanwhile, Robert has a decision to make when Pete Barton arrives back in the village and gives him a letter for Aaron from his dad Gordon.   He tells Adam about the letter and he insists that he give the letter to Aaron and let him make his own decision if he reads it or not.  However, when Aaron states later, that he wants nothing to do with Gordon, Robert makes up his mind to burn the letter.

Chas thinks she knows why Liv was shoplifting and Aaron tells her he’ll go to the trial with her, only for her to convince him neither of them will go.  Is she doing it for the right reasons?

Robert’s back at Home Farm

Bernice is desperate as she tries to make Lawrence believe she’s coping running Home Farm.  Nicola asks Robert to step in and help and he enlists Charity.  Chrissie and Andy arrive home from seeing Debbie and the kids and are shocked to find the pair in the office.  It seems Charity has a proposal for Robert and soon the pair have big plans for a forecasted cash injection.

Chrissie has come back determined to find out who her real father is and tells Andy she’s going to do a DNA test.  She tells Lawrence she wants a sample leading to him making a shocking a confession.  Andy warns her not to tell Lachlan about the admission until she’s got her own head in order.  Andy tells her not to be so hard on Lawrence.  Later, Ronnie Hale arrives at Home Farm but what does he want?

Bernice invites him in starts to talk about when Chrissie was born leading Lawrence to head straight for his cheque book and offer him payment to stay out of their lives.  Ronnie destroys the cheque; could he be Chrissie’s real father?

Belle confides in Charity that she might be pregnant who is adamant that she is taking her to get a morning after pill.  When they arrive back in the village Cain sees Belle with Rakesh; is he suspicious that he might be Belle’s mystery boyfriend?

Nicola is uncertain about Robert buying out Charity’s share of Home James, but Jimmy is more positive.

Emma wants Finn to let Ross in on his new business idea, but he’s not keen.  Ross tells Finn to let Pete go to Scotland as that’s what he wants to do.  However, Finn isn’t ready to give up on Pete  just yet.  Emma panics and tells him that she might have an illness to try and guilt him into staying.

Holly regrets meddling with Cain when she finds out about Pete and her mum kissing.  It seems that her interfering leads to Cain landing a punch on Pete when he finds him at the farm.