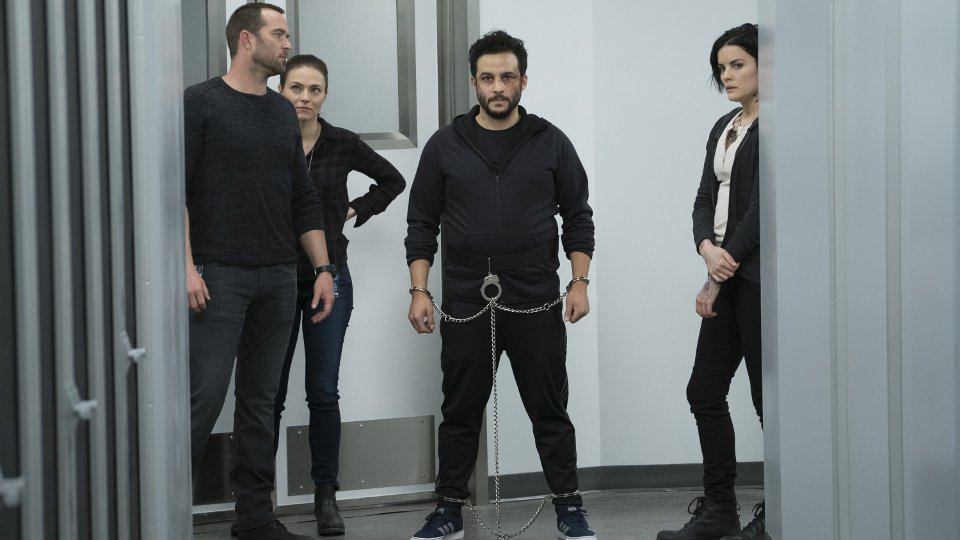 The latest episode of Blindspot continued right where the previous one left off.

Patterson (Ashley Johnson) had gone to a restaurant that David had booked for their anniversary before his murder. She had just solved his final New York Times crossword puzzle which revealed he had solved another of Jane’s tattoo’s. David appeared with Patterson throughout the episode as an illusion.

After solving the puzzle she was left not knowing what to do next. As she was about to leave the restaurant a special dessert arrived that David had arranged. This was the next part of the puzzle and a small wooden sheep was the next clue. The sheep was a playing piece from their favourite boardgame so she decided to head to his apartment. She asked the building manager if she could be allowed in but was turned away despite showing her FBI badge.

Instead she decided to climb the fire escape and almost killed herself by falling off. Once in the apartment she discovered that it had been emptied. The noise she had made on the fire escape alerted the building manager and he attempted to unlock the door. Patterson remembered that in the boardgame you put sheep in the fire, so she checked the fireplace and found a hidden key.

The key led her to another place and was used to activate a wind-up doll. The doll was holding a knife and once active it stabbed holes in a piece of cloth in the arrangement of the constellation of Taurus. This led her to Jane’s bull tattoo which she had already solved. She almost gave up but encouragement from imaginary David helped her persevere. She soon worked out that the tattoo might have more than one meaning. The eye of the bull corresponded to a particular star in the constellation called Aldebaran.

An Internet search for the star name turned up a single shop in the area with the same name. The shop sold antiques so she headed there hoping to find the next clue. However things went bad when the shopkeeper kidnapped her, tied her up and locked her in the basement of his house.

Meanwhile, Weller (Sullivan Stapleton) and the team realised that Patterson was missing when she didn’t turn up for work. It didn’t take them long to track down the antiques shop or the house of the shopkeeper.

When Patterson awoke she was barefoot and tied up. She managed to break free and get out of the basement. Outside it had been snowing so was risking frostbite. She was spotted by the shopkeeper and his brother as she tried to gain entry to the garage. Patterson fled through the woods with the two men pursuing her with rifles.

Before they found her, Weller and the team arrived on the scene. The man was killed, his brother arrested and Patterson saved. It was revealed that the man was a serial killer and his brother had been covering up his crimes. After her ordeal, Patterson saw David one last time where she said goodbye to him.

Elsewhere in the episode, Zapata was ordered by the prosecutor who has been blackmailing her to now focus her attention to Mayfair. Mayfair had a drink with a woman name Alexandra and they swapped phone numbers.

Weller and Allison (Trieste Kelly Dunn) continued their relationship. Jane (Jaimie Alexander) and Oscar (François Arnaud) also became closer and slept together. However Oscar’s new mission for Jane is for her to get closer to Weller.

Weller’s sister turned up to talk to Reade but he turned her away. He soon got a phone call with pictures of him and Weller’s sister plus another warning against continuing to see her. He spoke to Mayfair about the threats made against him and she decided to put discreet security details on both of them.

At the end of the episode Weller had Allison over for a family dinner where he forgave his dad for the past. After dinner his dad collapsed and ended up in hospital.

The next episode of the season is One Begets Technique. The team reluctantly work with a previous target in order to trap an international criminal.