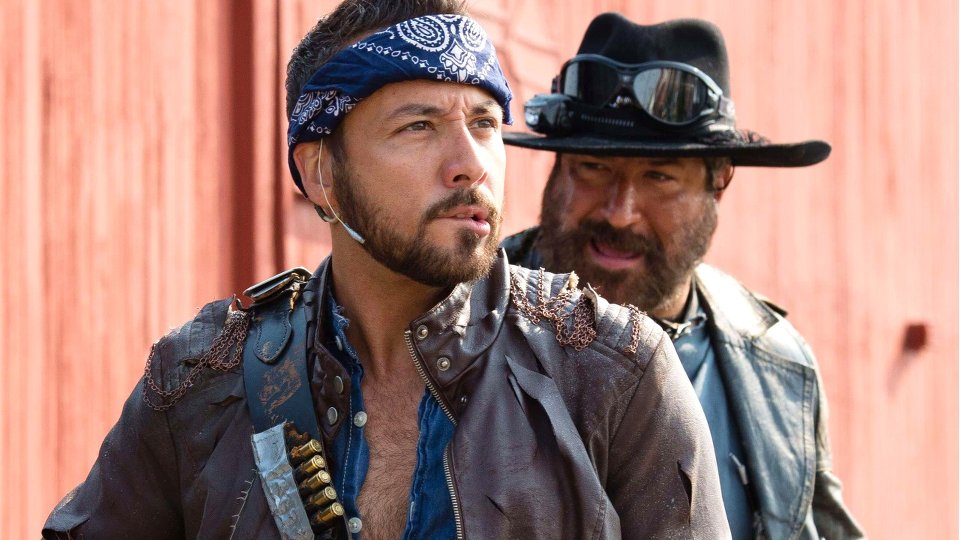 Of all the things I expected to hit our screens this year, I could never have predicted a boy band team-up for a cowboy zombie face-off.

I called up Howie Dorough, from the Backstreet Boys, to find out more about the movie, discuss how the project came together, and to get an update on the next Backstreet Boys album.

What is Dead 7 all about?

Dead 7 is a cowboy vs zombie movie if you can try to imagine that. It’s a light-hearted movie that Nick (Carter) co-wrote with a couple of writers in California. The project is an idea that he had. He was always creative as a kid, writing and drawing comic characters, zombie characters and cowboy characters. He came up with this idea for a movie and reached out to us to see who would be interested in doing it.

AJ (McLean) and I partook in it and they reached out to some other boy band guys. I think we have a good cast of characters that people wouldn’t expect to be in a movie together. It was fun and very light-hearted. We went to Montana to film over around 4 weeks. I had a great time and it was fun catching up with all the guys that we’ve shared moments with over the years and remembering stories. It gave us a chance to get to know each other once again.

Your character is The Vaquero. What do we need to know about him?

I’m a Mexican sniper and he’s a funny character. He knows Whiskey Joe (Joey Fatone) and there’s a group of us that get joined together to fight off these zombies. Joey’s character and mine have these fun love-hate bantering moments with each other and we got out there and try to take on the zombies of the world…or at least of Montana! They take us on too!

You mentioned that Nick asked the band who would like to be involved. Why did you want to be part of the movie?

First of all I wanted to support my brother Nick who reached out to us and I’m honoured that he did. Also I’ve always had a passion for acting since I was a little kid. When I was growing up in Orlando I did a little bit of everything – acting, singing and dancing. As a kid I did some movies like Parenthood with Steve Martin and Rick Moranis, Cop and a Half, a couple of bits on some TV shows like Sabrina the Teenage Witch and Saturday Night Live, when we performed they would ask who wanted to be part of a skit and I’d raise my hand.

For me I’ve always wanted to get back into acting and do it one day properly and have it as a second career. I think people that have done a great transition are Donnie Wahlberg, Mark Wahlberg and Will Smith. It’s one of those things where obviously because I’m in a boy band, it’s not the easiest think to break out of that box and get people to cast you in a lead role. It’s going to be getting small parts and building my way up. Hopefully I’ll get the chance to play a small role in a bigger movie later on. I’m very grateful that Nick gave me the opportunity to do this movie. I keep joking that none of us will be getting an Oscar nominations for it but it was a fun experience.

The movie is a whole lot of fun. What it as fun to make as it is to watch?

It was lots of fun to make. We stayed in this old Western town in Montana from the 1800s and it was like a ghost town. It was so cool to be in the same area as these guys and stay in the same hotel. We hung out before and after our scenes. I had my birthday weekend, and some friends in Montana invited us to their house. About 8 of us went, and Joey (Fatone) was there. He and I hit it off so well and just got to know each other. Now we catch up every so often in Orlando when we’re back home. It was cool and a great experience. There was no drama and we took the chance to talk about our stories and the old days and the people we knew. It was just fun rekindling that experience there again.

Dead 7 has already aired in the US. What kind of reaction have you had from the fans?

I haven’t really had chance to get a lot of feedback from the fans. When it came out I was actually in Utah with my family doing a little bit of snow vacationing. This weekend will be the first time we’re catching up with our fans in China, to do a show. A couple of weeks from now we’ll be doing our annual Backstreet Cruise out of Barcelona to France and Italy. It’ll be the first time I’ll be able to hear from the fans. The crew around us all said they loved my accent. My wife is in the movie industry and she’s worked for Jerry Weintraub, who did all the Oceans 11 and 12 movies, and her sister is the manager of Amy Adams and Vin Diesel so I knew I wouldn’t get praise for this film!

Brian (Littrell) and Kevin (Richardson) didn’t appear in the movie. Have they given you any feedback?

Backstreet Boys are working on a new album at the moment. Do you have any idea when that might arrive?

We’re still in the early stages of making this record with a couple of writers and producers. Right now we’re out there searching for the right songs and direction. Every album we take our time to ensure it’s a growth and a departure from the last record. We’re definitely in the midst of the creative early stages of it. I wish I could give you more information about where we’re at. We’ve recorded about 4 songs, 1 or 2 of them we know are strong contenders for the record. Normally we record a plethora of songs and the cream rises to the top when all is said and done. I’m hoping we can get it out before the end of this year but if not for sure by next year. Hopefully by the fourth quarter we’ll have something out, even if it’s just a single.

Do you have any plans to work on any more solo material?

Yeah actually. Each of us is working on solo stuff. Believe it or not I recorded a solo record that is being worked on as a children’s theatre production. It’s something I wanted to venture off and do, something totally outside of the box from the Backstreet Boys. I have two kids – a three year old and almost a seven year old – and they inspired me to do some music that’s fun with a little sense of adult humour but really relatable to kids. I’ve seen some of these kinds of movies like Wreck-It-Ralph and Toy Story, that adults and kids can watch at the same time and both be entertained. That’s why I created a CD/musical that’s going to be fun for both audiences to listen to.

You expressed your interest in doing more acting. Is there anything in the pipeline at the moment?

Actually no roles in the pipeline, I wish I could say I did. I’m now living back home in Florida so I’m not in California to find the roles but eventually it is my passion, when Backstreet Boys takes a little time off, to get back out there and reconnect with my agents and acting managers. I want to see what might be the right fit for me. I feel like no role is too small or too big. I definitely won’t have any lead roles in any big movies but if I can just get my foot in the door with some smaller roles that are a departure from what people would expect to see from me, hopefully they’ll give me the chance to show that I can stand on my own two feet and maybe have a little bit of credibility so people want to do more movies with me.

Why should UK viewers get out the popcorn and tune in to Dead 7 when it airs?

They should probably tune in because it’s the first time in history that this many boy band dudes are in one movie (laughs) and we’re not killing each other, we’re being killed by zombies. It’s a fun light-hearted film. We not only did a film together but we sang the lead title track together too. We just show everybody out there that the years they thought that there was animosity between us, it has never really been there and it was more media created. It’s just an epic moment in time right now. Also if they have nothing going on for two hours, it’s a good way to kill the time! (laughs)

Dead 7 airs on Syfy at 9pm on Tuesday 3rd May 2016. Watch the trailer for the movie below: