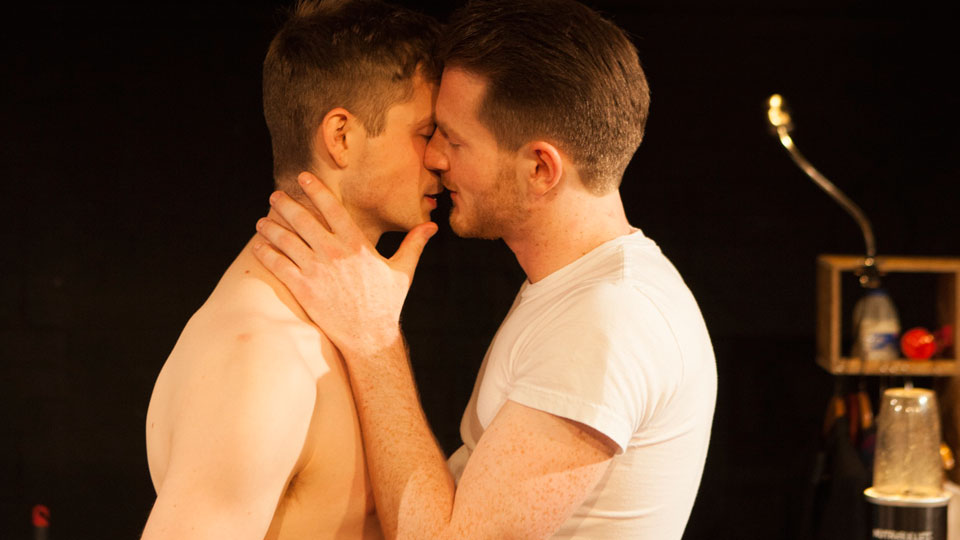 From 7th June – 2nd July 2016 at the Soho Theatre, you can see This Much (or an Act of Violence Towards the Institution of Marriage).

At a time when gender, sexuality and individual identity are undergoing a radical re-examination, John Fitzpatrick’s ground-breaking play, written as part of the Royal Court Writers’ Programme, examines the tug of war between wanting to belong to society and being true to yourself. The play asks if we form relationships to be happy or do it because we fear the alternatives and need to fit in. Does the tradition of marriage have intrinsic value or has its historical significance invested it with a value that has passed its sell by date?

Set amidst a traditional wedding party and featuring a classic disco soundtrack, This Much traverses an intimate story of adrenalin-fuelled games, heart-breaking highs and lows, violent confrontation and beautiful moments of love and humanity. Gar can’t decide between the man who plays games and the man on one knee with a ring, and every choice seems like a compromise. As boundaries between audience and performers are blurred, This Much questions suddenly being allowed to fit in, whether you want to fit in anymore or what that meant in the first place.

John Fitzpatrick said: “We have just stumbled through a looking glass from a binary phase into an age of spectrum. Fitting in has never been so much about being yourself. A tipping point has been reached with a younger generation who are more confident in being authentic to themselves and reject labelling. It’s not about being gay, straight or bisexual. Although This Much has a specific queer context and storyline, its themes are those that anyone faces when they feel ‘other’ to society’s norms, particularly in regard to traditional models of marriage, children and family. The central character is a man trying to decide between a traditional relationship which he thinks he ‘should’ subscribe to and something more challenging and scary. But both paths are flawed because he hasn’t faced up to himself. The society he grew up in drove his shame and self loathing, now that society is changing it’s up to him to be brave. Doing that, however, means losing all the safety and security his privilege afforded him.”

See Moving Dust for more details and to book.

In this article:John Fitzpatrick, Soho Theatre, This Much