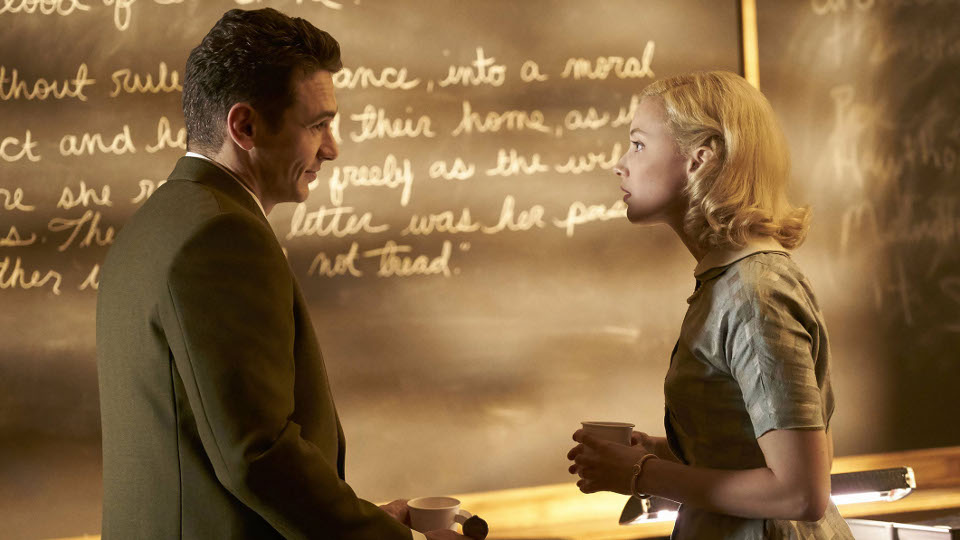 On the latest episode of 11.22.63, Jake Epping (James Franco) went to Holden, Kentucky in an attempt to prevent Harry Dunning’s father, Frank, from murdering his whole family on Halloween night. Harry was the old man who attended Jake’s night school class in the present at the start of the first episode.

After finding himself a place to stay, Jake set about remembering the details of Harry’s story. Remembering that Harry’s father was a drunk he headed to the nearest bar in the hope of tracking Frank down. It didn’t take long to find him and they ended up drinking together for the evening.

After the drinking Frank decided it was time to take Jake out for some ‘fun’. This involved taking Jake to the slaughterhouse and trying to get him to slaughter a cow. Jake refused so Frank did it anyway.

Jake realised that Frank was probably more dangerous than he anticipated so next he tried a different tactic. When Frank was at work, Jake showed up at the house and told his wife they had won a prize – a paid Halloween vacation. She accepts and Jake thought he’d done it and got them to safety.

Sadly it seems that changing time is as hard as Al said it would be. Frank turned up at Jake’s accommodation and too him to his butchers shop. Here he revealed he knew about the ‘prize’ and he’d been knocking his wife around. Jake’s next idea was to go and buy a gun, so that’s what he did.

Jake waited outside of the Dunning household for Frank to show up. Instead he ran into a knife-wielding Bill Turcotte who told Jake that Frank had previously murdered his wife. Jake confessed he was from the future but Bill didn’t believe him.

The time Jake was expecting the murders passed and he thought he’d influenced the timeline enough to stop it. However Frank arrived a few minutes later and Jake went in to try and stop him. After a fight Jake killed Frank by garroting him.

At the end of the episode Jake began to leave town before being confronted by Bill. He had one of Jake’s damaged clippings of the JFK assassination and wanted to know more.

The next episode is Other Voices, Other Rooms. Jake and Bill go to Dallas. They find out they’re not the only ones looking into Oswald. Jake also tries to blend in and is hired as an English teacher at a local school, where he re-meets Sadie, who’s the librarian of the school.