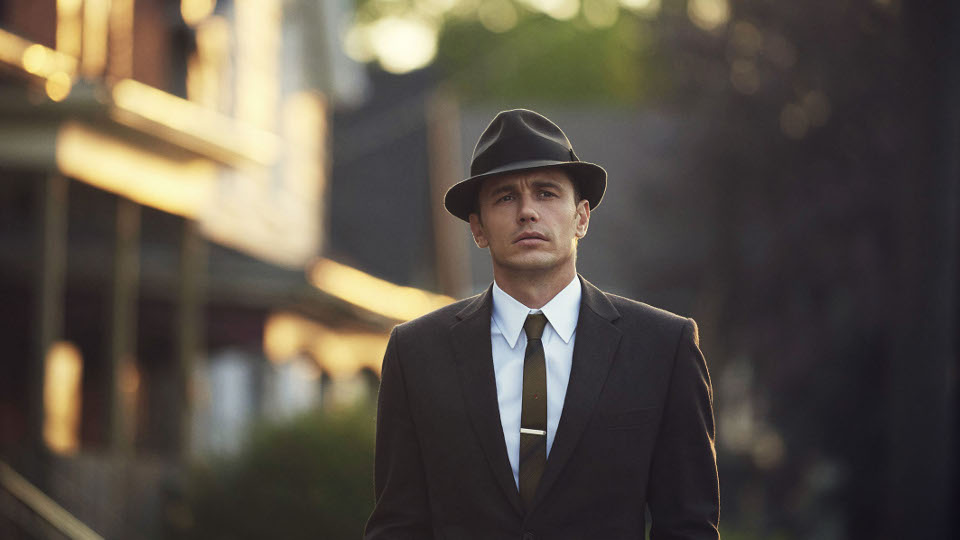 The season finale of 11.22.63 opened up with Jake (James Franco) and Sadie (Sarah Gadon) racing to get to the Book Depository and Lee Harvey Oswald (Daniel Webber) before he could assassinate JFK. Jake was driving their hotwired car like a madman, weaving in and out of traffic to make it on time.

As they got closer they were stopped by an unexpected police barricade. They decided to abandon the car and make the rest of the way on foot. Jake’s presence and actions had already altered time and it was doing everything it could to prevent him changing it further.

As they ran through the crowds of people Jake saw visions of Frank Dunning and Bill, while Sadie saw her ex-husband Johnny Clayton. People refused to get out of their way and Jake ended up tripping too. When they finally arrived at the Book Depository, Oswald was already in position. They were surprised to find the building locked up and Jake had to use his gun to convince the man on the door to open it.

Once inside the pair raced up the stairs towards the sixth floor where Oswald was camped out. They had less than five minutes to make the climb and arrived after he took his first wayward shot at the president. Before he could fire again Jake shouted and distracted him, forcing Oswald to turn and fire. He missed Jake and Sadie and lost his opportunity to take out JFK.

The fire door slammed shut, trapping Jake and Sadie in with Oswald. Jake tried to find her a safe place to hide before trying to creep up on Oswald. The pair fought over the gun and Jake eventually took it off Oswald and put a bullet through his chest. Returning to Sadie, Jake found that she had been shot in the abdomen and he held her hand as she died. The police then burst in and arrested him thinking that he was the shooter.

Things weren’t looking great for Jake who was found with two dead people and a rifle covered in his fingerprints. The police booked him in then took him for questioning. They were keen to pin the crime on him but Jake managed to get the attention of FBI Agent Hosty. He’d been following Oswald and asked for the room to talk with Jake in private.

He wasn’t keen on Jake’s explanation about trying to stop Oswald. However Jake started throwing out points using his history knowledge and promised to divulge them in any trial. Before Hosty could do anything else a call came through for Jake from the president and the first lady. They both thanked Jake for saving their lives.

Jake got off with the crime and asked for privacy to keep his name out of the media. With the mission over and Sadie dead, Jake went to catch a bus back to the rabbit hole so he could return to the future. Before he left he saw a vision of a smiling Sadie sat reading a book.

Back in 2016, Jake discovered that his changes to history have changed things. Unfortunately it wasn’t for the better with the world now looking like a post-apocalyptic wasteland. Al’s diner had gone and everything around it looked, rundown or destroyed. Jake wandered around a bit and saved a man being set upon by a group of men. After chasing them away he realised that the man was Harry Dunning, the old guy from his English class whose family he saved back in 1960.

Harry took Jake to where he lived and told him that he remembered him. Jake asked some questions about what has happened to the world and discovered that Kennedy managed two terms as president. Kennedy was succeeded by George Wallace and founded refugee camps which is where Harry’s family ended up.

Realising that his meddling in time hadn’t made anything better for the world or Harry, Jake decided he would have to go back through the rabbit hole to reset things. He arrived right back to the same spot in 1960 in his now damp and dirty suit.

Immediately he spotted a car driving past that contained Sadie and her two cousins. He gave chase on foot and followed them to a diner. Not really thinking he confronted Sadie and told her that they knew each other. That chemistry between them was still there but she obviously didn’t know him and Jake came across as creepy.

Outside the diner The Yellow Card Man appeared at the window so Jake apologised and went out to talk with him. He told him that he wasn’t going to mess with history again but that he just wanted to be with Sadie. The Yellow Card Man said it would be impossible and that Jake would end up stuck in a loop where she would just die over and over. Sadie came out to talk with Jake but he decided he had to let her go and told her that he had made a mistake. He then returned to the rabbit hole to restore the timeline.

Back in 2016 again everything seemed a bit pointless. Jake returned to his job as a school teacher and Harry Dunning came to see him. His efforts in Jake’s night class hadn’t helped him get his promotion. Jake broke down and apologised for not helping him and Harry told him he was a good man.

Later Jake searched for Sadie on Google and discovered that she was alive in Jodie. She had been named as the ‘Texas Woman of the Year’ and was due to be honoured. Jake took the trip to Jodie and watched an older Sadie (Constance Towers) receive the honour and listened to her speech. During the speech she read a poem that Principal Simmons had kept on his desk.

To end the series Jake asked Sadie for a dance and she accepted. He asked if she had had a happy life and she said that despite struggling at times she had. She felt like she might remember Jake from somewhere and we wondered if it was from the encounter at the diner when Jake when back to 1960. As they danced again in the gym where they fell in love, Jake saw her as a younger Sadie again.