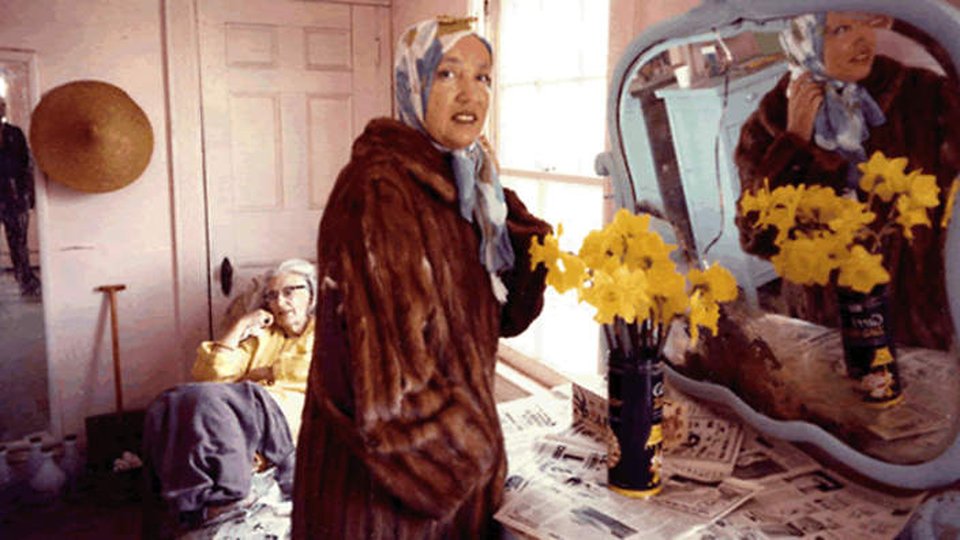 In a decrepit mansion in East Hampton we meet the Beales – Edith, and her 56-year-old daughter Little Edie. The Aunt and Cousin respectively of the most famous woman in the world: Jacqueline Bouvier Kennedy Onassis.

These two extraordinary women are the subject for Albert and David Maysles stunning documentary – Grey Gardens. A sweet, funny, haunting and sometimes heartbreaking portrait of a mother and daughter, who as Little Edie comments, find it “very difficult to keep the line between the past and the present.”

The present is 1975, although based on the fashions and manner of speech, you’d be forgiven for thinking it was the 1940s. Like two generations of Miss Havisham, these grand old dames of a forgotten age, with their glorious Yankee accents, have let decades pass them by as the world they know has crumbled around them.

In the 30s and 40s they were society darlings. Wealthy and privileged and living a gilded lifestyle. The Bouvier Beales were famous socialites, well known in the swanky circles of Manhattan and the Hamptons. Edith was a singer, and little Edie was a glamorous model and debutante with ambitions of being a dancer. Now they live in a house that is overrun by cats and raccoons. Flea ridden and falling to pieces. There are holes in the walls and no running water. The land outside the property has become a jungle. They don’t complain however. Edith happily watches one of the cats take a shit behind one her old portraits, and Little Edie feeds the raccoons and other assorted wildlife.

How did they get here? What has befallen them? How have they allowed themselves to live like this for so many years? The Maysles camera does not seek to answer these questions. There are no probing questions or talking heads. The camera merely observes these eccentric women in their daily routines. Much of this involves sunbathing (in costumes that are 30 years out of fashion), singing, dancing, arguing over the choices they have made, speaking over each other, listening to phonographs and reminiscing about their glory days.

There is nothing ordinary about these women. Edith wears extravagant hats in bed. Edie is never seen without a scarf wrapped tightly around her head. She also wears skirts upside down, pinning her vintage outfits together. Following the release of the film she would become a style icon. They are true eccentrics, but you sense the regret and bitterness that is just under the surface. The insinuation of a life stolen in its prime. What have these women done to each other over the years? Where does eccentricity end and mental illness begin?

These are women who knew nothing but wealth and privilege and high society. When all that was stripped away, all they had left was a small trust fund, a $300 a month stipend, and of course Grey Gardens itself – the house that they haunted for all those years. There are no more parties for them – apart from the excruciating birthday party in the film. No more rubbing shoulders with Presidents and First Ladies. They are forgotten. Trapped in this house and entirely dependent on each other.

Again I ask the question – how did they get here? As the Robert Frost poem, that Little Edie misquotes in the film goes, “Two roads diverged in a wood, and I – I took the one less travelled by, and that has made all the difference.”

The extras are superb, including The Beales of Grey Gardens, the follow up film created using the additional footage from the original shoot. There is also an audio interview with Little Edie, a directors commentary recorded in 2001, interviews, photo scrap books and trailers.

Advertisement. Scroll to continue reading.
In this article:Grey Gardens, The Criterion Collection