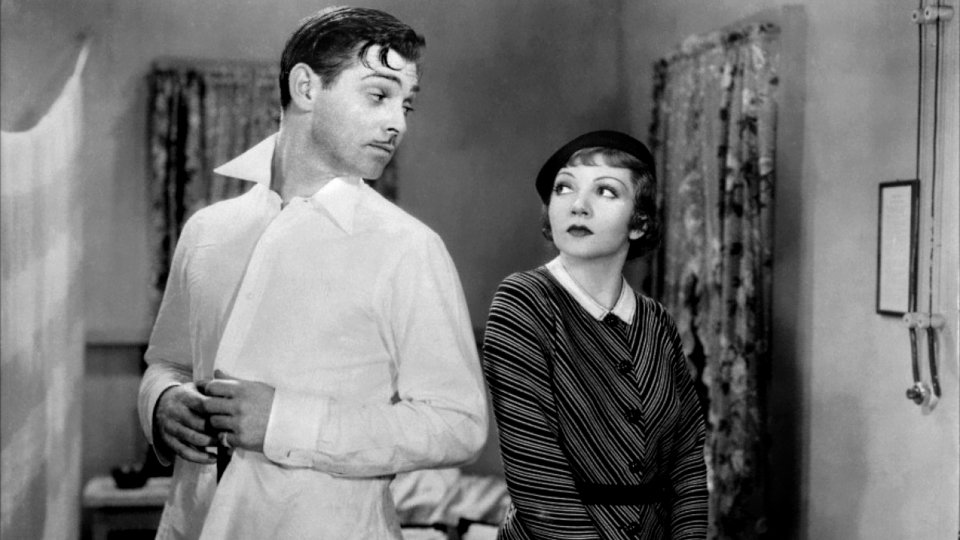 As one of only three films to have won the top five awards at the Oscars (Picture, Director, Actor, Actress and Screenplay) – the others being One Flew Over the Cuckoos Nest and The Silence of the Lambs – Frank Capra’s It Happened One Night certainly lives up to it’s billing.

Claudette Colbert plays Ellie Andrews, a haughty and famous socialite who is running away from a disapproving father. Clark Gable is Peter Warne, a rakish newspaperman with a twinkle in his eye. They cross paths on a bus journey from Miami to New York. Ellie wants to get to the husband that her father despises. Peter is in desperate need of a story. It’s as classic a set up as you’re ever going to get.

Along the way they bicker, they banter, they flirt, they fall out and they fall in love. Gable and Colbert make for a sensational screen couple, in the same league as Tracy and Hepburn and Bogart and Bacall. Their scenes in the motel, with the ‘Wall of Jericho’ (a sheet hung from the ceiling to divide the room), and the improvised domestic quarrel in the morning are genuinely wonderful. Equally brilliant is the hitchhiking scene that comes later in the film, with one of the most famous and recognisable punch-lines in cinema history.

You know exactly where the plot is going, but that’s only because It Happened One Night is the blueprint film for every romantic comedy that has been produced since 1934. It practically invented the genre as we know it today.

So yes, we have seen this before, but only because this film did it first. But crucially, no film has ever done it better in the intervening 82 years. It Happened One Night is witty, fast-paced, fun, funny and romantic. It is everything a rom-com needs to be and more. It’s astonishing to think that Gable and Colbert were convinced all the way through production that they were making a dud. How wrong they were. It Happened One Night will put a spring in your step and a song in your heart. An absolute joy.

To make things even better, this new release comes packed with extras. We have an interview with Frank Capra Jr, discussing the origin of It Happened One Night. There is also a conversation with film critics discussing the film and its relationship to the screwball comedy genre. Also included is Fultah Fisher’s Boarding House, a silent short film from 1922, and the first film that Frank Capra ever directed. There is also a terrific feature length documentary presented by Ron Howard, about the life and career of Capra, featuring interviews with people who worked with him, as well as film historians and contemporary actors and directors who have been influenced by Capra, including Robert Altman, Martin Scorsese, Fay Wray, Jane Wyatt, Amy Heckerling, Richard Dreyfuss, Michael Keaton and many others. Also included is the original trailer, and an edited telecast of the 1982 AFI Awards Ceremony where Capra was awarded the lifetime achievement award.

In this article:It Happened One Night, The Criterion Collection