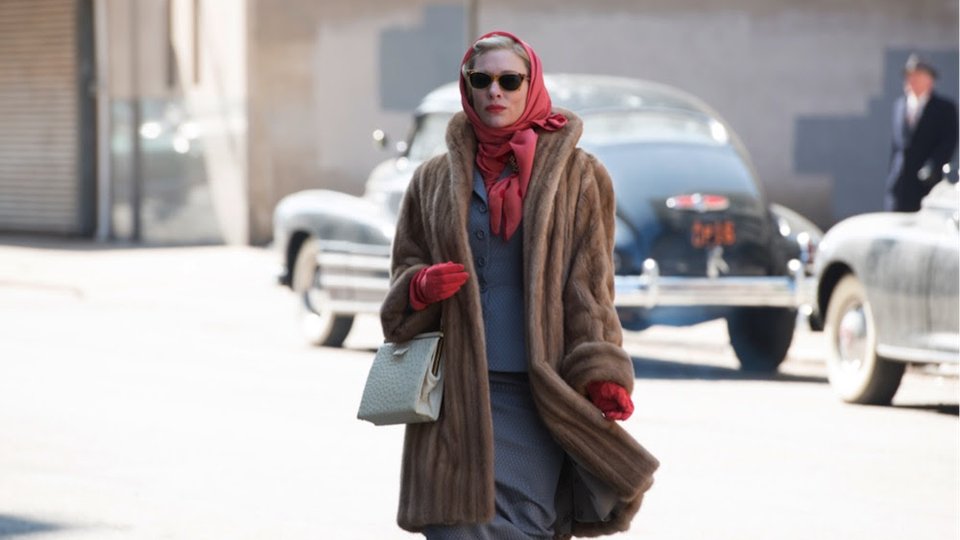 Glamorous socialite Carol (Cate Blanchett) meets young shop worker and aspiring photographer Therese (Rooney Mara) while picking out a present for her daughter in a department store. After Carol leaves her gloves following the purchase, Therese mails them back to her and the two women strike up an unlikely friendship. In the midst of a divorce Carol starts to develop feelings for Therese, who is trying to decide whether to go to France with her boyfriend or face up to her burgeoning feelings for Carol.

Without a doubt Carol was one of the most critically acclaimed films of 2015. Based on the book The Price of Salt by Patricia Highsmith, Carol is a romantic drama exploring forbidden love in the 1950s. When Highsmith’s book was released in 1952, the subject matter was fairly controversial for a number of reasons.

Carol is beautifully shot and directed. Every scene looks stunning and the costumes and sets are impressive. The way it looks is a definite plus and I can completely understand the praise it’s received in this area.

Honestly I was disappointed by Carol. Given all of the critical-acclaim and awards buzz that has surrounded the film, I was expecting something more than I got. There’s no denying that Cate Blanchett gives a tremendous performance as the titular character. She’s spectacular in almost everything she does, and she exudes sexuality and glamour as Carol. Rooney Mara acquits herself admirably too, although she doesn’t quite match the performance level of Blanchett.

The problem for me is that the story at the heart of the movie is nothing particularly new. Granted Highsmith’s book would have been a fairly original idea when it was published, but at the time of the film being released stories of same-sex forbidden love are a dime a dozen. My other issue is that despite the stellar performances, the film lacks emotion. Therese feels more like a way to pass time for Carol than a genuine love. There’s also an odd disconnect when it comes to Carol’s custody battle with her husband. Her behaviour is inconsistent and at times selfish, and it certainly doesn’t give the impression that she’s dying to be the main carer for her child.

The disc features a handful of extras including Q&A highlights with members of the cast and crew, and behind-the-scenes footage.

I realise this review goes against the majority of the rave reviews out there. I really wanted to love Carol but I got to the end of it and felt unsatisfied. There is no particular pleasing conclusion, there are no real impactful plot developments, and the lack of emotion was a real problem for me. I would say see the film for the performances but don’t expect to see a mind blowing or original movie, because Carol isn’t either of those things.