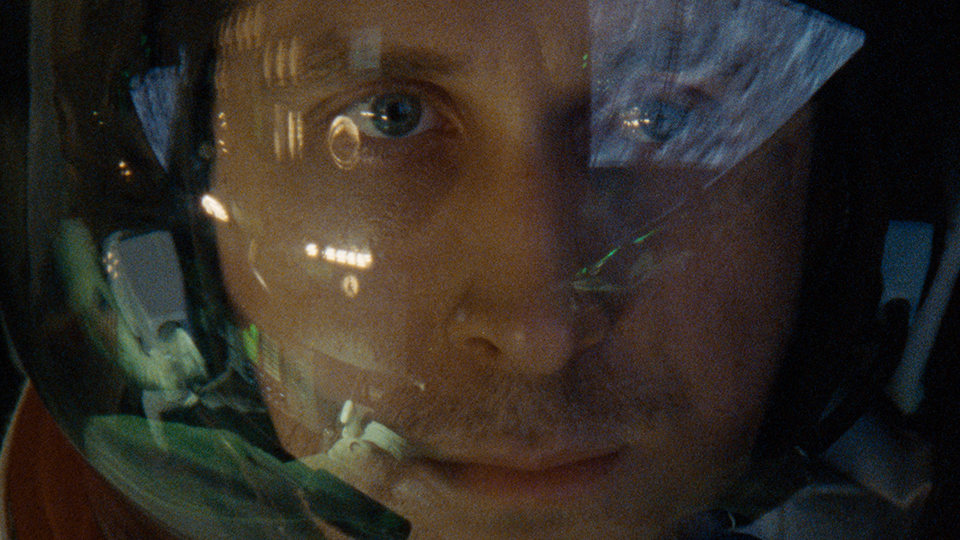 I’m getting pretty sick of this Chazelle kid now. Not content with making a masterpiece thriller in the niche world of jazz drumming (Whiplash), followed by a glorious and award-winning homage to the golden age of musical cinema (La La Land), he now gives us First Man, a stunning, elegiac, and poetic portrait of astronaut Neil Armstrong. Not even 35 yet, and he has made three modern masterpieces in completely different genres and styles of filmmaking. Seriously Damien, no one likes an over-achiever. Especially not the Academy it would seem.

Taking an unconventional approach to the story, this is no obvious and heroic tale of the Apollo 11 mission. Chazelle instead presents us with the ten years leading up to that one giant leap, focusing on Armstrong the man, and his family during that period. Ryan Gosling plays Armstrong as a quiet and stoic man, trying to internalise the grief that haunts him throughout the film. Neil and his wife Janet (a brilliant Claire Foy) lost their daughter to cancer when she was only two years old. He carries this tragedy with him all through the mission.

When we meet Armstrong, he is a bookish maths nerd and aeronautical engineer. He is also a test pilot. In the film’s heart-stopping opening sequence we are in the cockpit with him as he takes a X-15 rocket plane into orbit. It’s an extraordinary evocation of the insane risks these men put themselves through. You can feel the rickety contraptions being torn apart. You can hear materials straining and warping under the pressure.

Following the death of his daughter, Armstrong applies to join the Gemini Project – the NASA missions that preceded Apollo. Having found himself grief stricken and bereft of hope on Earth, perhaps he will find peace and answers in outer space. Claire Foy’s Janet jokes at one point that she married Neil because she thought it would be a normal life together. Instead it’s a life of naval bases, too many funerals, and not knowing if your husband will come home from work alive. She is the absolute beating heart of the film, tethering both Neil and us to terra firma. It could easily have been a simpering concerned wife role, but Foy’s breath-taking performance allows us to feel the emotions that Neil has locked himself away from.

Stylistically the film is a huge departure from what we have seen before from Chazelle. He uses different cameras and film stocks to delineate between the different environments of home, NASA, and Outer Space. Chazelle and cinematographer Linus Sandgren frequently use frames within the frame when depicting Armstrong, encircling him in darkness, suggesting that even here on Earth he is floating around in the vacuum of space.

Huge kudos must also go to Tom Cross and his precision editing, Nathan Crowley’s production design, and the exquisite sound mixing in the film. These elements combine throughout First Man to deliver some of last year’s most jaw dropping sequences of cinema. I’m not claustrophobic at all, but the Gemini 8 sequence gave me palpitations.

The final piece in the puzzle is Justin Hurwitz, who is perhaps Chazelle’s most important collaborator. His score for First Man is a thing of wonder. Beautiful and melancholic, it explodes into a stirring crescendo for the film’s incredible finale, which I don’t think would be a spoiler to say is the moon landing. Stunning 65mm IMAX photography, perfect cutting, and music that will leave you breathless. It is pure cinema.

But Chazelle doesn’t get lost in the rapturous spectacle he has created. Ever the obsessive perfectionist, he manages to find new notes in this oh so familiar and iconic sequence. He never loses sight of Armstrong, and what this means to him. Not as a moment in history, but the internal odyssey he has been on to reach this moment.

The blu-ray release of First Man is superb, and packed with extras. There is a feature length commentary with director Damien Chazelle, screenwriter Josh Singer, and editor Tom Cross. There are two deleted scenes, and then eight featurettes. Shooting for the Moon and Preparing to Launch both take us behind the scenes of the film, with interviews with the main cast and crew. They are very short however, and barely scratch the surface.

Giant Leap in One Small Step is a short documentary about Neil Armstrong, featuring interviews with his sons. Mission Gone Wrong looks at the sequences from the film where the test missions got into trouble, how they set about filming them, and the amazing stunt work required.

Putting You in the Seat is another behind-the-scenes featurette, exploring the stylistic choice of making the audience feel like they are in the pilot’s seat. Chazelle talks about how he wanted the mission scenes to feel tactile and real and experiential. There’s another short documentary about recreating the moon landing, and making sure they got the details of this iconic moment in human history correct.

The featurettes keep on coming with another behind-the-scenes piece about the sequences they shot at the real locations at NASA and Cape Canaveral. Finally on the disc is a fun little short piece with the actors doing their practical astronaut training.