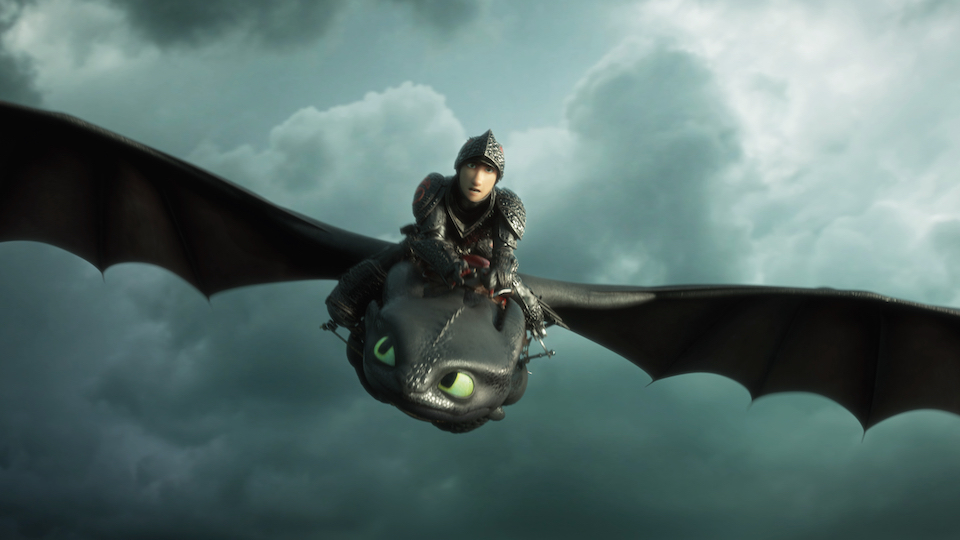 The How to Train Your Dragon movies have long been one of the crown jewels in the DreamWorks Animation house, and with this third instalment, The Hidden World brings the series to a mostly satisfying conclusion. Much like the previous films it’s another rollicking good adventure, with breath-taking animation and visual design, and a massive side order of emotion as the story of young Viking Hiccup (Jay Baruchel) and his Night Fury dragon Toothless comes to an end.

Picking up a year after the events of the last film, Chief Hiccup has successfully transformed the island of Berk into the world’s first Dragon/Viking utopia. But as we have learned in the previous films, wherever there be dragons, there will be dragon hunters, and The Hidden World is no different. Enter Grimmel the Grisly (F. Murray Abraham), a cruel and sadistic hunter, and the complete ideological opposite of Hiccup. Having killed all of the other Night Furies, he is determined to make Toothless, the alpha dragon, his latest quarry.

In the midst of all this, Toothless discovers a Light Fury – a shimmering white female dragon – and becomes completely enchanted, leading to a courting dance sequence that is so funny and lovely, it is arguably the best thing in the film. But as the colossal hunting party bears down on the island of Berk, Hiccup makes the drastic decision to seek out the Hidden World – a mystical haven for dragons that appears on no maps – and move his entire clan there in the hope of securing their safety.

How to Train Your Dragon: The Hidden World is a film with a very timely message about standing up in the face of intolerance and bigotry, and says important things about displacement, and humanity’s impact on the natural world. Which is all well and good, but the film itself suffers from feeling a little too similar to the previous instalment. Did we really need another ruthless hunter to boo and hiss as he imperils our beloved Toothless?

The secret weapon of all these films has always been the relationship between Hiccup and Toothless. Seeing how they have grown and evolved is the beating heart of the trilogy, and it is the main reason I adore these films. Unfortunately, the tone of the films hasn’t grown and evolved enough to really land the emotional impact of their story.

Part of me wants to applaud this, as there is nothing more tedious than films getting darker as the series moves on. However, these films have always skewed on the silly side when it comes to the supporting characters, and yet again too much time is spent with Hiccup’s annoying friends, who have not changed at all during these films. Which is fine, these are kids films after all, but it does take time away from Hiccup and Toothless. This is the end of their story, and it could have been something truly special.

Gripes aside, the final act of the film delivers the goods. Plenty of action and stunning animation, and the final ten-minutes will kick you hard in the feels. But again, I think this is more down to the relationship we’ve built up with these two characters over the previous films, as opposed to them nailing the landing this time around. It’s still heartfelt, and it will still make your eyes sting, but it could have been so much more.

The Blu-ray release comes with a colossal hoard of extras to keep you busy once you’ve finished with the film. There are two exclusive short films from DreamWorks Animation. An alternative opening to the film depicted in animated storyboards, as well as 10-minutes of deleted scenes. You can also choose to watch the film with a feature length commentary track from director Dean Deblois, producer Bradford Lewis, and head of character animation Simon Otto.

There are so many featurettes too. How to Voice Your Viking gives us a wee glimpse inside the recording booth with the actors. Creating and Epic Dragon Tale takes us behind the scenes with the filmmakers discussing the storytelling within the film. How I Learned from Dragons is a series of short interviews with the cast.

There’s a couple of short pieces from the host of Brave Wilderness, looking at the study of real animals and wildlife that inspired and informed the design of the dragons. The Dragon Sheep Chronicles are a couple of silly short films about trying to protect the sheep population on Berk. A Deck of Dragons takes a closer look at Fishleg’s collection of Dragon Top Trumps.

Growing up with Dragons gives us more interviews with the cast and filmmakers discussing the entire trilogy. Drawing Dragons is a featurette about the design and visualisation of the dragons. Epic Villain focuses on Grimmel and the casting of F. Murray Abraham. Astrid summarises the entire trilogy in 60-seconds. Don’t watch this before you’ve seen the film! And finally, Welcome to Berk, is a short clip narrated by Hiccup all about the new home for the Vikings.