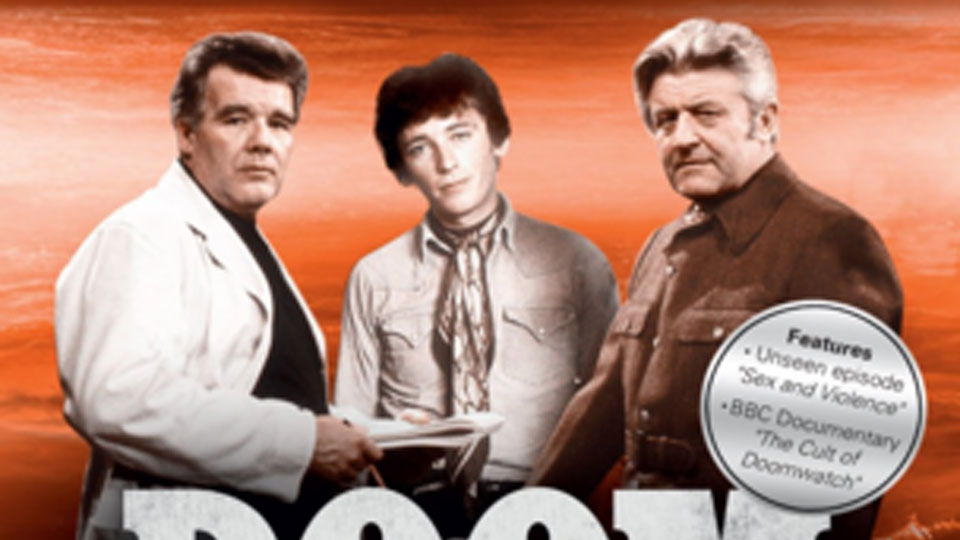 The early 1970s introduced viewing audiences to Doomwatch – a science-fiction series that ran for only three years; but which in that time captured the public imagination, terrified viewers with its unnervingly prescient storylines and courted more than its share of controversy. Dark, intense and often apocalyptic, Doomwatch is an intelligent and intriguing show that deserves to find new fans with this seven-disc DVD release.

Doomwatch follows the adventures of a small team of government scientists whose remit is to investigate ecological and technological threats to the British public. The organisation is headed by Doctor Spencer Quist (John Paul), a rueful, melancholic scientist haunted by his involvement with the creation of the atomic bomb and determined to now put his intellect and scientific research to philanthropic use. He is aided by the younger and more dashing cockney wide boy Doctor John Ridge (Simon Oates) as well as a wet-behind-the-ears rookie (Robert Powell in the first series, John Nolan later).

John Paul is perfectly cast as the restrained Quist. His hang-dog face conveys both intelligence and remorse. Simon Oates takes the showiest part. Ridge is much more impulsive and combustible. His dizzying array of outrageous 1970s fashions liven up the screen too. Young beanpole Robert Powell, who went on to considerable success on the back of Doomwatch, is charismatic as the eager young Toby Wren, and John Nolan, who also went on to enjoy a stellar career, never quite steps out of Powell’s shadow, but nevertheless is a competent replacement who appears in most episodes of the second season.

Like many dramas of the era, not all of the instalments of Doomwatch survive in the archives. The third and final season is especially poorly-represented, with only three extant episodes. This welcome release brings together all of the surviving episodes. Since most are stand-alone, the incomplete nature of the series isn’t a major impediment to understanding its chronology. What emerges from this seven-disc set is a gem of a series – Doomwatch is science-fiction at its very best.

The pedigree is clear from the talent involved in the making of the show. It was the brainchild of Kit Pedler and Gerry Davis, who had collaborated together on Doctor Who and created the Cybermen. Doomwatch is a must-see for Doctor Who fans (the original science-fiction series, rather than the fantasy remake), since many of the writers (Brian Hayles, Robert Holmes, Louis Marks, Dennis Spooner) and directors (Lennie Mayne, Pennant Roberts, Darrol Blake) worked on Doctor Who too, and Doomwatch’s producer (and sometime writer and director) Terence Dudley also had links to the other classic BBC show.

Yet Doomwatch is much more adult and science-orientated than Doctor Who ever was. The emphasis is on examining scientific ideas and how they can impact on the lives of everyday people. Doomwatch played on many contemporary fears, and also raised issues such as the dangers of leaded petrol and genetic modification that were still a good few years from registering on the public’s consciousness. In many respects, it is a series way ahead of its time, and consequently it stands up well today.

The first episode, The Plastic Eaters, sees a potentially useful virus, ordinarily employed to break down plastic within landfill sights, released inside an aeroplane that starts melting in mid-flight. The second sees genetically-modified and super-intelligent rats wreaking havoc in London. Project Sahara properly introduces another theme that recurs throughout the show: Doomwatch’s uneasy relationship with government. Whilst half of its time is spent tackling threats to humanity, the other half is used up in justifying its existence to bureaucratic civil servants. Nothing changes, eh?

The Devil’s Sweets examines the threat of the tobacco industry and subliminal advertising. Invasion takes on the subject of what happens to a small village community when the presence of a dangerous microorganism necessitates an evacuation. The Battery People looks at the long-term effects of poisoning the workers of a fish farm who are exposed to dangerous chemicals in the water.

In its subject matter, Doomwatch was both of-the-moment and prophetic, finding no shortage of issues to dramatise. The credit of Doomwatch is that it was meticulously scientifically researched, and made science relevant and engaging to lay audiences. It was also capable of delivering huge shocks, such as the sudden and violent death of one of the leads. The episode leaves a stunned audience following an enquiry into the death, in which Robert Gillespie (Keep It In The Family) appears as physicist Dr. Warren on the interrogation panel, injecting some wry humour into a well-written supporting part. Every episode features other familiar names and faces in guest roles since, as with Gillespie, they are well-written enough for the best actors to make their own and want to take part. Take a look at the cast list below to see just a few of the stellar names attracted. The Fall and Rise of Reginald Perrin fans will enjoy seeing John “I didn’t get where I am today” Barron in a recurring role as a supercilious minister – and he plays it remarkably similarly to CJ! The tragedy of the missing episodes is that Doomwatch guest-spots by actors of the calibre of Patrick Troughton, Brian Cox and Elisabeth Sladen have sadly been lost.

The dramatic effect of Doomwatch remains of a high standard. Whilst the third and final series is mostly-missing, it does contain the episode Sex and Violence, which is a fantastic parody of Mary Whitehouse’s relentless campaigns against the broadcast of what she perceived to be immorality. June Brown, now forever associated with the role of Dot Cotton in EastEnders, plays Mrs Catchpole, a barking mad bigot clearly based upon Whitehouse. The episode was never transmitted, perhaps as it was too close to the bone, even for Doomwatch, but it stands up well as a delicious critique of religious hypocrisy.

Whilst Doomwatch is a remarkable series, there are a few negative points. Owing to the age of the material, the picture quality is variable, and there is significant noise and distortion in places. Some episodes look as if they may have been transferred from VHS off-air recordings. The series itself is also a product of its time. The female parts tend to be underwritten, at least until the introduction of Dr. Anne Tarrant (Elizabeth Weaver) who can hold her own with Quist’s intellect and manage Ridge’s sexism; but poor Wendy Hall, playing the female sidekick Pat Hunnisett in the first series, is given virtually nothing to do except make coffee, ask silly questions, be patronised by Quist, hit on by Ridge, and fawn over Toby Wren. It is a product of its time, and shouldn’t be judged by the social mores of today…

The series will also only appeal to those who enjoy older television, which is more closely aligned to theatre than film. Like TV drama of the era, Doomwatch is shot with long scenes, few sets and lots of dialogue. It requires viewers to have an attention span longer than a few seconds coupled with the ability to suspend their disbelief for anything other than wholly-realistic CGI special effects. If you want slick and vacuous, look elsewhere. Doomwatch is a fantastic example of British science-fiction, and it fully deserves its status as a cult classic. Thank you Simply Media for this incredible release!

The episodes contained on this release comprise:

(Disc One) The Plastic Eaters, Tomorrow The Rat, Project Sahara, Re-Entry Forbidden (Disc Two) The Devil’s Sweets, The Red Sky, Train and De-Train, The Battery People (Disc Three) You Killed Toby Wren, Invasion, The Islanders, No Room For Error (Disc Four) By The Pricking Of My Thumbs, The Iron Doctor, Flight Into Yesterday (Disc Five) The Web of Fear, In the Dark, The Human Time Bomb (Disc Six) The Inquest, The Logicians, Public Enemy (Disc Seven) Waiting For A Knighthood, Hair Trigger, Sex and Violence