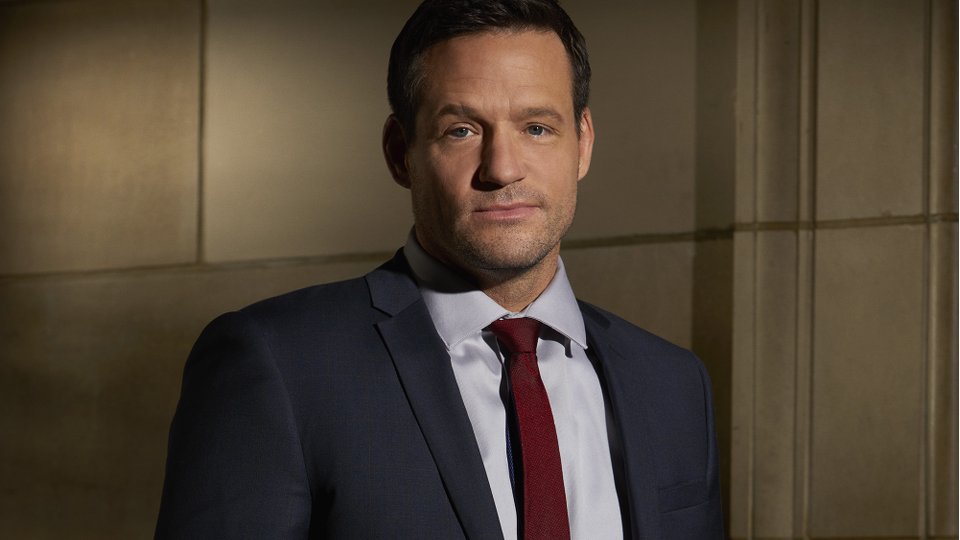 Josh Hopkins is one of the most recognisable faces on television thanks to starring roles in hit shows such as Ally McBeal and Cougar Town.

For his latest role, Josh is tackling a dark and twisty new drama thriller as FBI agent Liam O’Connor in Quantico. One of the most popular shows of the current TV season, Quantico tells the story of FBI recruit Alex Parrish (Priyanka Chopra) who is suspected to be a terrorist following the bombing of Grand Central station. Each episode delivers plenty of twists and throws a heap of curveballs to throw you off track.

We caught up with Josh to talk about the show’s arrival in the UK, find out more about his character, and discuss the difference between doing comedy and drama.

Quantico debuts in the UK on Thursday. What can we expect from the show?

I can give a bit of advice, how about this…it’s not one of those shows you can watch while you’re going through your Facebook or while you’re on your phone on social media. You will not know what’s going on if you don’t pay attention (laughs). I have a lot of people tell me that – ‘I have to rewind and go back because I can’t do what I usually do when watching TV doing other things like clean, I have to really pay attention.’

It’s a thrill a minute. While it’s got a serious backdrop there’s a lot of sexy fun stuff that goes on, lots of beautiful people, which is never bad to look at. There’s also a whodunit and a plot twist every episode and you’re trying to figure out who is the terrorist and the bad guy. It’s constantly changing in your mind as to who it could be. At its heart it’s a whodunit but it’s got a lot of aspects.

You play the character Liam O’Connor. What do we need to know about him going into the series?

It’s interesting because the series takes place in two different time periods. What was appealing to me about the character was when we first meet Liam in the past time, he is an alcoholic, down-on-his-luck FBI guy that’s messed up a lot and sort of on his way out. He’s come back to Quantico and been assigned there to teach. He used to be a hotshot agent but now he’s kind of faded out and is almost there just to get his pension. In the same episode we flash-forward and he’s one of the top ranking FBI officials, he’s top brass. We’re going to see what happens from this beginning to where he gets his swagger back (laughs) and all of a sudden he makes his way all the way back to the top of the FBI. Liam has a large arc that’s fun to play as an actor.

He’s had some nefarious ways. In the beginning you see that he and (director of the training program at Quantico) Miranda (Aunjanue Ellis) have a past and now they’re working together so that’s a weird dynamic. He used to work with Alex’s (Priyanka Chopra) father so that’s a weird relationship. There’s a lot going on for him. A lot of this questions…they all get answered but new questions come up all the time.

How much do you get to know about the plot twists for your character ahead of time or do you only find out when you get the script?

It’s really the latter. I wish I could say that we knew. We’re still filming here and there’s so many things I don’t know. Sometimes you’re playing a scene, and this is really odd for an actor, and you’re not really sure why the character is acting he way he is. Sometimes I’ll have to almost make up a scenario so I can play a scene truthfully, and not just play an emotion for no reason. Later I find out why my character was acting like that. Usually it’s pretty close to the scenario I’ve made in my head to play it truthfully. We don’t know – none of us! We all have theories on who has done it and who hasn’t. It’s interesting.

Quantico has been one of the biggest shows of the current TV season in the US. What’s it like to be part of a show that has so much hype and buzz around it?

I’m in an industry that probably gets told no more than any other industry. That’s what actors do, we just get told no a lot. To get on something that is actually doing really well and is coming back is exciting. Obviously it’s fun to be on anything that’s successful. I’ve been on plenty of shows that I thought were good but didn’t for one reason or another, whether it be the timeslot or public angst at the time or whatever, didn’t do well and some shows I’ve been on that are bad but have done good. No one takes for granted that we’re on a show that’s doing really well. It makes us so happy.

Your fans in the UK will most likely know you best from comedy series Cougar Town. What’s it like to go from such a funny show to something a lot darker and more twisty?

It’s funny I did six seasons of Cougar Town and I did want to do something different but I didn’t realise I’d end up doing something that was absolutely completely different. You can’t get two more different shows than these two which is fun for me. Hollywood is so funny because six or seven years ago I’d been doing mostly drama stuff in movies and TV, then the Cougar Town audition came up and the people were like ‘well this is a comedy so we’re not sure he’d fit in’. I went in and I got it obviously and shot it for six years. Then I get done with that show ad head back out to pound the pavement and people went ‘well this is a drama so we’re not sure you could do it’ (laughs). In that regard it’s been eye-opening to see how quickly you get pigeonholed.

A lot of Quantico’s cast are upcoming actors. It seems there’s a really great energy on set. What’s it been like working with the ensemble?

We’ve been lucky! We shoot on location in Montreal. It’s really important that you get along because we depend on each other not only on-set but off. It is a great cast and some really good young actors, and some older actors. It’s weird to be the old guy on the show (laughs). That just happens so quickly. I told them ‘you guys are in Top Gun. I used to be in Top Gun. Now I’m an instructor here at Top Gun. I used to be Tom Cruise but now I’m Tom Skerritt and it happens quickly’ so I told them to enjoy it! (laughs)

Have any of the cast come to you for advice given the experience you’ve had in the industry?

Yeah occasionally they do but I like to preface any time that I give advice that this industry changes quickly and advice is out-dated fast. When I first started doing television it was more embarrassing doing cable shows as it was probably not a great show. Now cable is a golden era of television. There’s so much going on on the Internet and on Netflix and all that. It’s hard for me to give advice about an industry that changes so quickly. Most of my advice is just be appreciative – it’s fast, fleeting and we’re luck to be working.

Are you interested in doing more behind the camera work?

You know, I did direct on Cougar Town. I directed a few episodes and I really did enjoy it. I would like to direct if we come back for next season and I’m still on the show. I’d like to direct one of two of these. The hours are so demanding and it’s really hard to find the hours to prep for an episode because you’re so busy filming and it’s so many hours. It’s definitely something I enjoyed when I did it and I’m planning to do in the future for sure.

Why should people in the UK tune in for Quantico?

Because you don’t want to be left out at the watercooler. You want to know what people are talking about. People are going to be talking about this. One thing I would say is just to watch the phenomenon that is Priyanka Chopra. I didn’t know who she was and she’s such a big Bollywood and international star – I really didn’t know. Now she’s becoming such a big star here. She presented at the Oscars and she’s doing the Baywatch movie, a comedy with The Rock, and she’s becoming a phenomenon. It’s fun to watch. They should watch so they know who Priyanka is! She’s got it. Whatever that IT is, she’s a star.

Quantico arrives on Alibi at 9pm on Thursday 10th March 2016. Watch the promo for Quantico below:

In this article:Josh Hopkins, Quantico