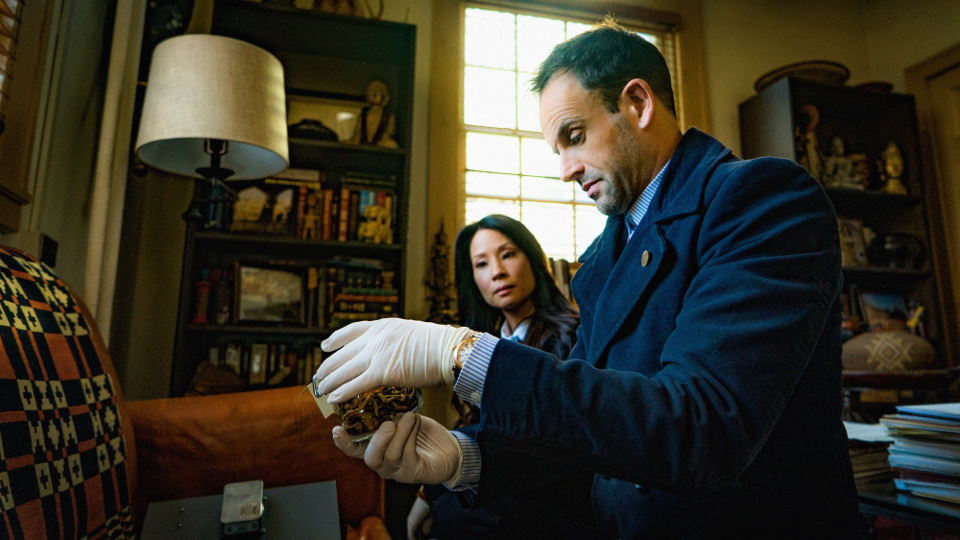 The latest episode of season four saw Holmes (Jonny Lee Miller) approached by Captain Gregson and a colleague from Narcotics. They wanted Holmes to carry out a heist to steal information from a laptop which was inside the compound owned by a drug-dealing bike gang.

Holmes couldn’t wait to get started and made contact with an undercover officer who had infiltrated the gang. He provided photographs of inside the compound and Holmes got to work planning how best to carry out the Heist.

Before he could start the undercover agent was apparently killed making a move on the laptop himself. Upon further investigation Holmes realised that the officer had been working with someone else from the police department. The accomplish had double crossed the officer in an effort to steal the bikers money for herself.

Elsewhere in the episode Watson (Lucy Liu) spent time with Fiona Helbron (Betty Gilpin). She had assisted them in a previous case and now wanted Watson to investigate her new boss to make sure he wasn’t a criminal.

Watson realised that Holmes had a thing for Fiona and teased him about it. Embarrassed he denied it before later admitting it to be true.

Fiona turned up at the Brownstone with gifts for Watson but spent some time on the roof with Sherlock. She explained she enjoyed his company and even suggested he might kiss her. Before anything could happen Holmes got a text message on his cell phone.

Later he went to visit her and the pair decided to go out for coffee. It looks like Holmes may have found himself a girlfriend.

The next episode of season four is A Study in Charlotte. Sherlock and Joan search for a murderer who used poisonous mushrooms to kill a botany professor and a group of the instructor’s students. Also, when Joan is disturbed by loud noise next door, she discovers her neighbor, Trent (Richard Kind), is renting out his home through a vacation site that caters to hard partiers

Tune into Sky Living at 10pm on Thursday to watch the episode. Preview episode 13 with our gallery below: