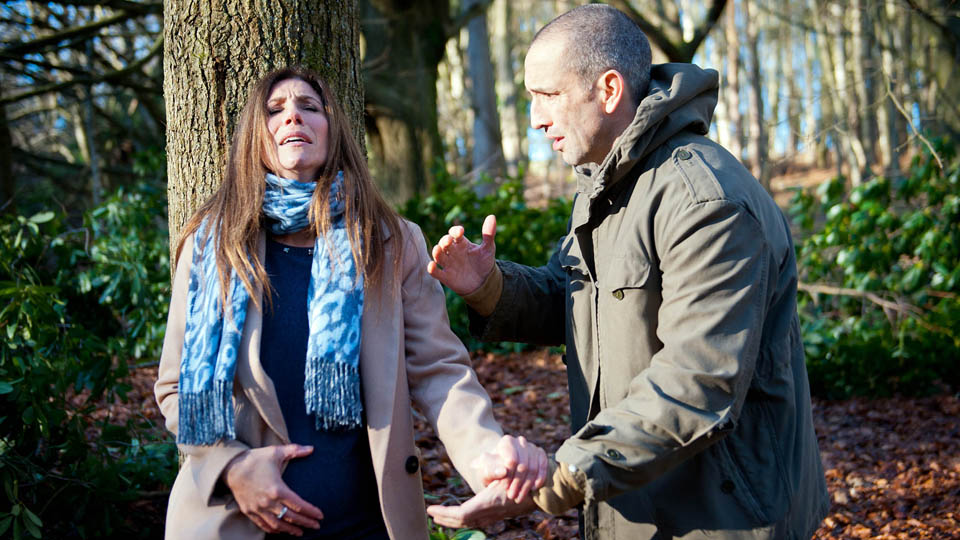 Welcome to our weekly look ahead at what’s going to happen in Emmerdale. Read on to find out who gets shot, who gives birth and the latest on Aaron vs Gordon.

Megan is moved when Sam offers to be her birthing partner and it seems that it’s left her feeling charitable as she invites Jai to join her for her scan the next day.  As Sam drives her, she realizes she can’t keep taking advantage of him and reminds him that she’s not Rachel.  She asks Sam to pull over so they can have a proper discussion.  When she tells him that she’s been treating him too much like a partner, he gets out of the car and heads off into the woods in a strop.

Megan follows him and tells him he shouldn’t have run off and that she has to make sure there’s no misunderstanding.  Suddenly she squats down in pain;  Megan has gone into labour!

Wanting to call an ambulance,  they both realise they’ve left their phones in the car so Sam runs off to get help, leaving Megan hoping she won’t have to give birth in the woods.  Unfortunately, Sam doesn’t make it to the car as he’s accidentally shot by Joanie, who is out in the woods being taught how to use a gun by Zak.

Meanwhile, Jai heads to meet Megan at the scan and after a short distraction from David, he spots Megan’s car by the side of the road.  He’s left unnerved when he calls Megan’s phone and heads in to the woods to find her.

At the hospital, Zak and Joanie are beside themselves with worry as Sam is examined by a doctor.   They are both overjoyed when the doctor gives Sam the all clear but, their mood darkens when the doctor says they have a duty to inform the police when a gun shot is involved.  Joanie admits to Sam that she shot him and he’s left torn about what to do.

Later, Sam tells Megan she’ll be the best mum in the world and he kisses her, pulling away just before Jai arrives.  Megan is left reeling but plays it cool so as not to rouse Jai’s suspicions.  She worries how she will set Sam straight that the kiss was a mistake.

Aaron learns what Robert has been up to

Chas is shocked when Gordon turns up and claims he knows she paid his neighbour, Ryan, to say he was abused by him and he throws her against the wall.  Marlon comes to her aid and pushes Gordon through from the back of the pub as Doug calls the police.  Later, Chas is stunned when Robert drops a bombshell that could have massive consequences for Aaron.

Robert tries to convince Chas not to tell Aaron the truth about the new witness but the choice is taken out of her hands when the police arrive and tell her that they can now charge Gordon, leaving Aaron fully resolved to push ahead with it.

When Ryan turns up and tells Robert he can’t go through with the plan, Robert panics but manages to persuade him by giving him more cash.  Aaron arrives and looks upset to see Robert with another guy.  He is left annoyed about what Robert did and decides to go and visit Ryan for himself but what will he tell him to do?

Chrissie wonders if Lawrence is her father

Lawrence is shocked to find the footage of Bernice on Lachlan’s laptop and assumes that he has been secretly filming her.  He’s even more shocked when Chrissie admits it was her doing.  Lawrence explains to Chrissie that he’s given Bernice permission to stray whenever she feels the need and Chrissie is gobsmacked.  She starts to think that he must have had a similar arrangement with her mother and that maybe Lawrence isn’t actually her biological father.

When Andy learns of Chrissie’s honey trap he quits his job at Home Farm but is later thrown when Chrissie apologises to him and breaks down in tears.  She fills him in on Lawrence and Bernice’s open marriage and she talks about her doing a DNA test to see if Lawrence definitely is her father.  Andy tries to tell her it takes more than DNA to be a proper dad but has Chrissie already made up her mind?

Paddy and Rhona are given good news that they’re being put forward for recommendation by the adoption panel, but when Vanessa raises Pearl’s concerns, Rhona tells Paddy that she wants Pearl to move out.  Paddy is left to do the dirty work and Pearl is left gutted.

Talking with Marlon, Rhona tells him that she may have made the biggest mistake of her life letting him go, and they look like they might kiss.  Rhona admits to Marlon that she and Paddy have been in a really bad place, but Marlon’s convinced there’s more to it than she’s letting on.

Emma notices bruising on April’s arms and is concerned that April doesn’t want Marlon or Carly to know.  She casts a watchful eye over Carly.

Rakesh begins to worry about money.

Diane tries to push for sensitivity towards Pollard from Doug over his stay at the B&B but it seems Doug can’t keep his complaints to himself.