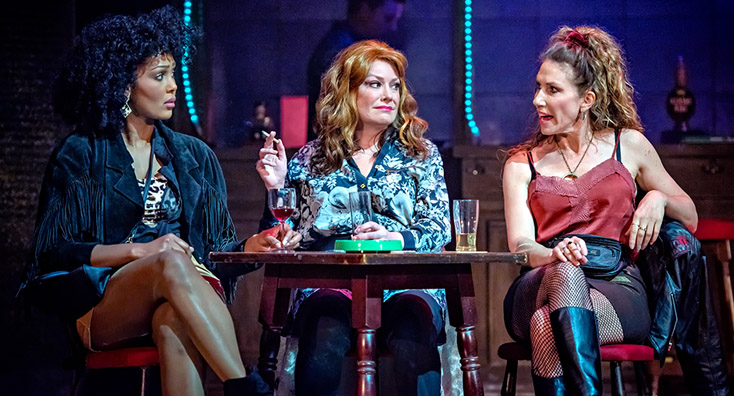 Kay Mellor’s Band of Gold was a sensational TV hit in the mid-Nineties and ran for three series. Today, its exploration of women living life on ‘the lane’ returns in a bold new theatrical version, premiering at Leeds Grand Theatre ahead of a national tour.

Inspired by research into the lives and experiences of sex workers on the streets of Leeds and Bradford, the play unpacks the story of four very different women in a time of woeful minimum wages and ineffective income support services.

These are independent women who value their time at more than just a few pounds an hour — and if that means earning better money through the oldest game in business, then so be it.

We meet aspirational Anita, in a comical performance from Laurie Brett, who doesn’t consider herself to be a professional at all. Rose, brought to life by Gaynor Faye, is a hard-edged team leader with a secret past. Emma Osman’s effusive and headstrong Carol is a young mother, intent on keeping her work and parenting separate. And then there’s the ill-fated Gina (Sacha Parkinson), a recently separated and fragile woman with mounting debts to repay.

Distilling a complex series of TV scripts into a coherent two-act play for stage isn’t a simple task. But in under two-and-a-half hours, Mellor hands over a brisk drama with a surprising tragedy at its centre, climaxing in a rewarding twist.

Tonally, the play covers everything you could ask for — from the darkest, desperate tragedy to the most absurdist and heartwarming comedy. There’s even a touch of cabaret singing to vamp up a variety atmosphere.

The result is a lean thriller made up of short scenes, cut across several locations in an almost televisual style. In the hands of a lesser skilled writer-director, it could feel dangerously plot-driven, but a wealth of colourful dialogue jumps from the page and gives the women of the lane an authentic, living voice.

That said, the rapid pace affords limited breathing space for all the characters to dazzle. Shane Ward’s Detective Newall only crops up in the second act and is mostly forgettable, whilst the unmasked villain of the piece suffers a little from a last-scene confession to quickly tie things up.

This would be a problem if the play was all about the men, but it isn’t — and that’s the point. Band of Gold is an empowering period piece that fearlessly explores a distinctly silent world — providing fresh agency and representation to a subculture that is still on the edge of society today. With that in mind, this is fundamentally a play about four strong women amplifying their voice, and they deserve to be heard.