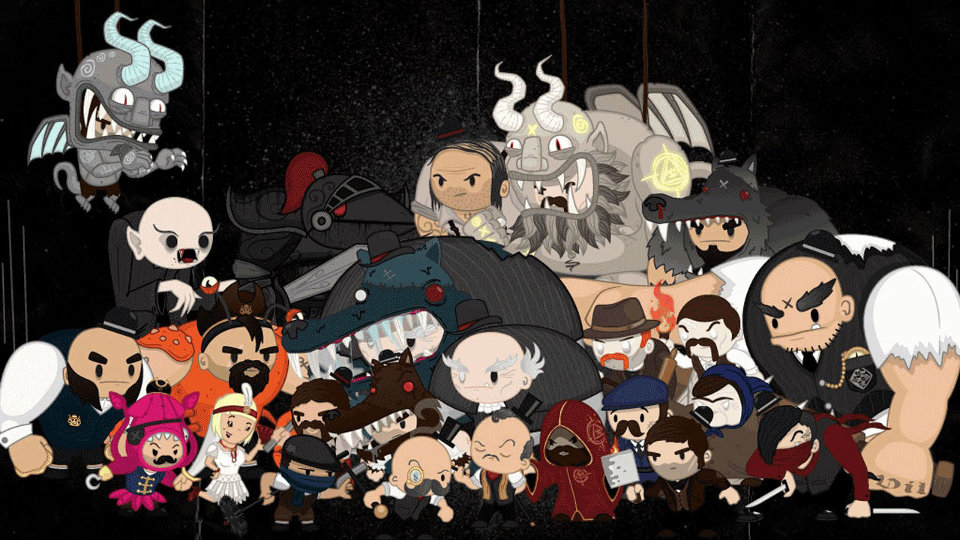 Foul Play first appeared on Xbox 360 and Steam back in 2013. It’s a side-scrolling brawler that uses the gimmick of setting the gameplay on a theatre stage. Several other titles had already used a similar idea including The Gunstringer, Black Knight Sword, Battleblock Theater and Puppeteer. Now Mediatonic and Devolver Digital have polished the visuals up to bring the game to PS4 and PS Vita. I’ve been playing the PS4 version but it’s worth noting that this is a cross-buy title so buying it once allows you to play on both formats.

In Foul Play you play as protagonist Baron Dashforth, a Victorian daemon-hunter, who takes to the stage to tell the incredible (and completely true, honest) tale of his life story. He’s accompanied by his loyal companion Scampwick. The story is split up across a series of plays and he begins each sat in an armchair. As he recounts his tales the stage comes alive with actors, props and scenery.

The game starts you out with simple light and heavy attacks before moving onto grabs, throws, parries and special abilities. It’s entirely possible to button-mash your way through the majority of the game but if you want to go for the bigger combos and tougher challenges then you need to practice.

The key to mastering bigger combos is learning to move around the stage quickly so you can string your attacks together. Learning when to execute the parry move is also essential as it can stop you getting hit to keep your combo alive. Getting into the right position before attacking can be frustrating and I often found myself losing a high combo while swinging at fresh air.

The theatre setting comes complete with a live audience that you need to keep entertained. This is done by attacking enemies whilst dodging and parrying attacks. Getting hit immediately drops their enjoyment and if they become bored you need to work harder or risk the play ending early.

Each stage presents you with a series of challenges to beat such as defeating an enemy last, achieving a high combo or performing a perfect scene. The perfect scene challenges are particularly tough as they require you to beat a scene without losing your combo. While tough, beating the challenges is worthwhile as you can be rewarded with charms. You can have two active at once and they buff your character.

The game is most fun if you team up with a friend for local or online co-op. The second player takes the role of Scampwick. Co-op doesn’t change the game a great deal but it’s fun working together to keep the audience happy. There are also co-op moves available such as parrying an enemy together. The co-op adds an extra competitive element to the gameplay.

Aesthetically the game uses a similar style to the TV show South Park. It looks nicer than ever thanks to the upgraded HD visuals. The game is packed with humour but there is often too much going on so you have to really pay attention to take it all in. One area I was rather disappointed in was the lack of voice-acting. The dialogue and banter between the characters is really entertaining but you have to read everything. This feature was sorely missed in the original release and it would have been a great addition to the re-release.

Foul Play is a fun game in short bursts due to the repetitive and often exhausting gameplay. Two and a half years after the original release it would have been nice to see some extra content. At under five hours it is also quite a short game but side-scrolling brawler fans should still enjoy their time with it.