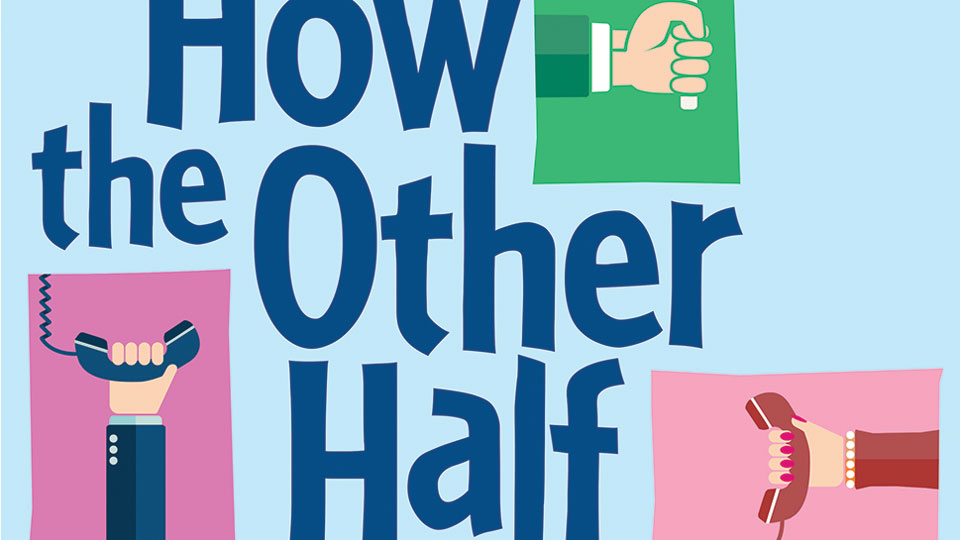 Alan Ayckbourn’s farcical tale of matrimonial mishaps, How The Other Half Loves will appear in the West End this spring. At turns heart-wrenching and hilarious, Ayckbourn’s tale of social graces and personal misunderstanding remains one of the celebrated writer’s most famous comedies. The 1969 classic – the first of Ayckbourn’s plays to be staged on Broadway – returns to London to play the Theatre Royal Haymarket from Wednesday 23rd March 2016 – Saturday 25th June and is produced by Bill Kenwright.

As Bob and Fiona clumsily try to cover up their affair, their spouses’ intervention only adds to the confusion. William and Mary Featherstone become stuck in the middle, falsely accused of adultery and with no idea as to how they’ve become involved. The plot culminates in two disastrous dinner parties on successive nights, shown at the same time, after which the future of all three couples seems in jeopardy…

2016 marks Alan Ayckbourn’s 55th year as a theatre director and his 57th as a playwright. To date he has written 80 plays – the latest of which will open at the Stephen Joseph Theatre, Scarborough in 2016 – and his work has been translated into over 35 languages, is performed on stage and television throughout the world and has won countless awards.

Major successes include: Relatively Speaking, Absurd Person Singular, Bedroom Farce, A Chorus of Disapproval and The Norman Conquests. In the past four years, there have been revivals of Season’s Greetings and A Small Family Business at the National Theatre and in the West End productions of Absent Friends, A Chorus of Disapproval and Relatively Speaking.

In 2009, he retired as artistic director of the Stephen Joseph, where almost all his plays have been and continue to be first staged. In recent years, he has been inducted into American Theatre’s Hall of Fame, received the 2010 Critics’ Circle Award for Services to the Arts and became the first British playwright to receive both Olivier and Tony Special Lifetime Achievement Awards. He was knighted in 1997 for services to theatre.

How The Other Half Loves is directed by theatre director and biographer Alan Strachan. Alan has directed plays in New York, Copenhagen and Amsterdam, but the majority of his work has been in London. He was Artistic Director of the Greenwich Theatre in London for over a decade, and has worked with, amongst others, Sir Michael Redgrave, Dame Penelope Keith, Maureen Lipman CBE, Sir Michael Gambon and Sir Alec Guinness. He came to early prominence as the director of Alan Ayckbourn, and he been involved with Ayckbourn’s theatre at Scarborough for many years.

See www.trh.co.uk for more details and to book.

Advertisement. Scroll to continue reading.
In this article:Alan Ayckbourn, Alan Strachan, How The Other Half Loves, Theatre Royal Haymarket