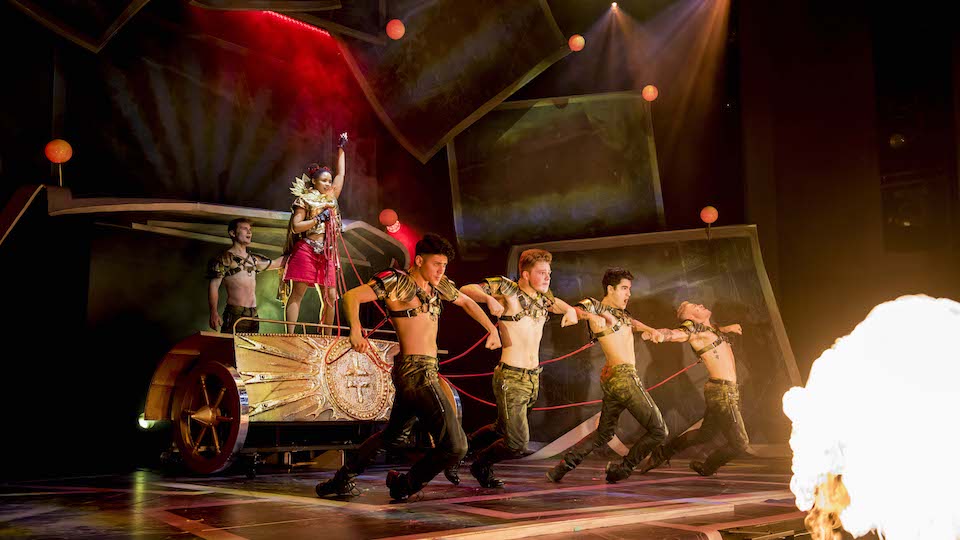 If you are – or ever were – a fan of 90s pop music, specifically boy bands or other chart heartthrobs, then you’ll enjoy Tim Firth’s musical The Band. As the first few lines of Take That’s Pray ring out and our leading female teen fan, Rachel, sings into her hairbrush surrounded by her favourite boys – performing live on Top of the Pops (TOTP) – tingles of nostalgia coursed through my veins and several cathartic tears escaped my soppy old eyelids. (My 90s era teen obsession was PJ and Duncan AKA Ant and Dec. They still hold a special place in my heart. The loyalty never really leaves you. You just have to grow up…eventually!)

This is without question a musical for the fans. It’s about the fans. It’s a simple, yet effective, device to please the crowd. We focus on five female fans; Rachel, Claire, Heather, Zoe and Debbie. They are 16, vibrant, full of hormones and promise. The friends are all immensely likeable in their own ways. Zoe’s geeky, Claire’s sporty, Debbie’s confident and Heather’s bold – already sexually active and fiercely proud of it. Meanwhile protagonist Rachel, the heart of the show, is plump, shy, and struggling to cope with the news that her parents are divorcing. Rachel’s only care in the world? The Band. When Debbie wins them all tickets to see ‘their boys’ in the flesh at a concert in Manchester it is the highlight of their lives. I’ll not spoil the tragic, if a little predictable, twist that sees the girls go their separate ways but, after the interval, we reconnect with the ladies 25 years on.

As ‘the boys’ reunite in real life, so do our fans. There’s a cast switch over for the older ladies and the quality in all the performances, young and old, is impressive. It’s clear there’s a real family-like atmosphere among the cast. Issues highlighted include obesity and lesbianism when former teen diving champion Claire comes back larger than life and Heather’s revealed to be a gay mum. The topics are mostly played for gentle laughs and light relief. Regardless of some questionably patronising handling of the sensitive issues in the script, it’s encouraging to see representation of different body shapes and sexuality on stage. The premise that the same group of ladies twice win competitions to see The Band perform is a little far-fetched but it serves its purpose as an excuse to bring them together. It’s the strong female ensemble cast that carry the loose plot along with humour and heart.

Take That are a footnote in the drama that builds as the women come to terms with aging, regrets and loss. They learn to appreciate the meaning of friendship, the bond of shared experiences and the enduring love left in their hearts for each other. The soundtrack to the girls’ lives is The Band’s music. Take That’s name is never actually uttered but as ‘the boys’ come on and perform numerous numbers in varied costume changes, the Take That spirit is conjured up in bucket loads. The action is peppered with uplifting Take That hits Never Forget, Back for Good, Greatest Day, The Flood, Relight My Fire, Shine, Rule the World and a tear-jerking rendition of A Million Love Songs.

Of course, if you watched Gary Barlow’s BBC one talent series, Let It Shine, you’ll have seen them whittle down the all-male pop group to create Five-to-Five. AJ Bentley, Nick Carsberg, Curtis T Johns, Yazdan Qafouri and Sario Solomon appear to enjoy every minute of their time on stage and while there was some backlash at the revelation there’d be no lines for the lads, to presume they are merely ‘backing singers’ is far from the truth. The five lads aren’t actors, but they instead sing and dance energetically on stage to make a convincing five piece pop group. The same chemistry that simmered from the real Take That boys in their heyday is somewhat absent but this is a fun, vibrant show with plenty of feel-good factor. It’s a 90s nostalgia trip you can’t help but enjoy!