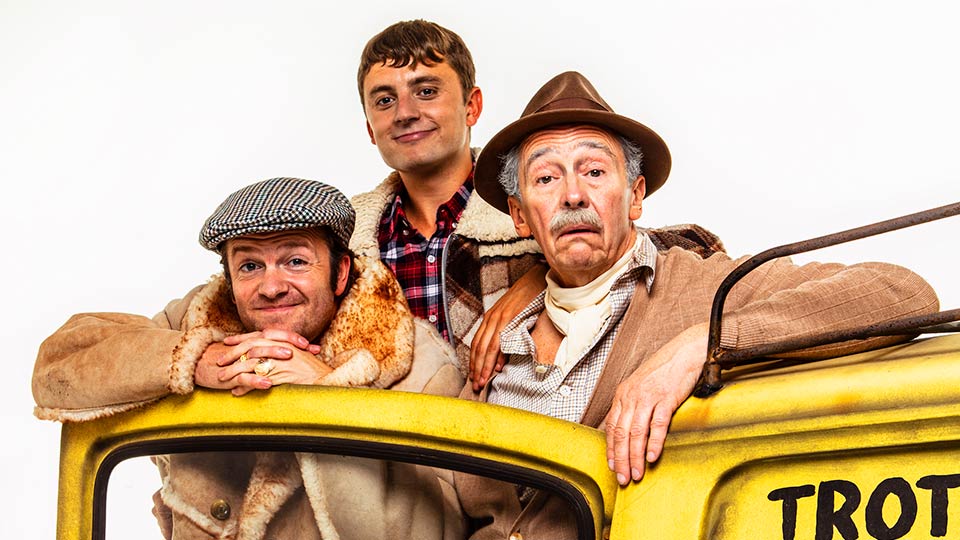 I admit, when I heard the iconic BBC sitcom Only Fools and Horses was being transformed into an all-singing all-dancing West End show I feared Del Boy and Rodders would end up looking a right pair of pillocks. Thankfully, au contraire! As Tom Bennett (Del Boy) and Ryan Hutton (Rodney) swagger on stage, with their trusty suitcase in tow, recognisable mannerisms and idiosyncratic nuances see you warm them instantly. The performances are far from cringe-worthy impressions but rather a faithful homage to the characters we know and love.

As Del rattles off a list of gear they have to flog that day, and he reaches ‘TVs, Deep freeze and David Bowie LPs’, a collective knowing smirk spreads across our faces. Unashamedly self-indulgent and self-aware, gleefully, the stage comes alive with the familiar theme song and, suddenly, we’re wandering down the immortal ‘Hooky Street’. Treated to a parade of much-loved characters including Boycie, Marlene, Denzil, Mickey Pearce and, of course, Trigger.

Co-written by and starring British comedy hero Paul Whitehouse (who shines as soppy old Grandad), it’s clearly been a labour of love. The heart, soul and laughter from the TV scripts enters much of the dialogue but there’s updated wit for a 2019 crowd, too. At one point, Del breaks the fourth wall, acknowledging that toe-tapping his way into a dance number’s ludicrous. Because it IS silly that these characters are suddenly breaking out into song but, as with all musicals, you have to get over that before you can start having fun.

It’s by no means a perfect piece of theatre but, in making the bold transition from over 40 hours of material to a 2 hour stage show, a believable story arc’s bound to suffer somewhat. They’ve cherry picked plot lines and used poetic licence to guide us on the Trotters’ journey. The set design’s impressive as we effortlessly rotate between Nelson Mandela House, The Nag’s Head, ‘Hooky Street’ and even the Trotter’s Independent Traders three-wheeler are all lovingly recreated. I’m determined not to give away many spoilers as there’s some surprises along the way but, praise where it’s due, a stand out exchange involving Oscar Conlon-Morrey (Del’s Dating Agent) near steals the entire show from Bennett during the catchy, tongue-in-cheek and utterly, hilariously non-PC number ‘Bit Of A Sort’. If you’re expecting new storylines or a chance to find out what Del’s up to now, you’ll be disappointed. This is the Trotters’ universe as it was left in the 20th Century.

But it’s not all sing-a-long-a-Peckham, there’s some poignant moments too. Raquel’s want song ‘The Girl’ tries to tug at the heartstrings – but somehow misses the mark – and Whitehouse’s solo ‘Not Now Grandad’ brings a spotlight on his character’s loneliness. Del’s monologues to his dearly departed mum stir the emotions, too. This isn’t a musical made of glitzy ensemble routines, this is as much a love letter to the old East End as it is our beloved cockney characters. It’s sobering to learn that Chas Hodges, sadly, along with John Sullivan, passed away before they could see Only Fools and Horses The Musical become a reality. Together they penned the well received knees-up style number Where Have All The Cockneys Gone? and the finale track – immortalising Del’s catchphrase – This Time Next Year (We’ll Be Millionaires).

It’d be impossible to capture every laugh out loud moment each fan’s waiting for but they certainly cram in a few! Where some classic scenes couldn’t be played out on stage, there’s purposeful nods towards those that didn’t make the final cut. Del declares, ‘Rodney’s always been the Robin to my Batman’ and, as a chandelier teeters above the stage to evoke a performance of Phantom Of The Opera for Rodney and Cassandra, we can’t fail to make the connection to the notorious chandelier cock-up.

With a script and original score co-written by John’s son, Jim Sullivan, rest assured, the quality control’s in place. I can’t fault any of the performances (unless you’ve an exceedingly sharp ear for the Scouse accent, in which case, you’ll be disappointed with Denzil). If you’re a fan of Del Boy and Rodders then you’d only be a fool to miss this celebration. If you were only ever a casual viewer, this may whet your appetite to re-watch some comedy classics – and even introduce a new generation to the Trotters! If you’re a fan of musicals then there’s plenty for you, too. (It’s almost Pantomime in part, save your boos for The Driscoll Brothers during the curtain call!) If you’re a grumpy old git who’s lost their sense of fun then, well, there’s only one thing to say… Shut up, you tart! Learn the lyrics to the theme tune, so you don’t feel a 42 carat plonker, then get yourself down to the Theatre Royal and enjoy this sheer nostalgia trip.