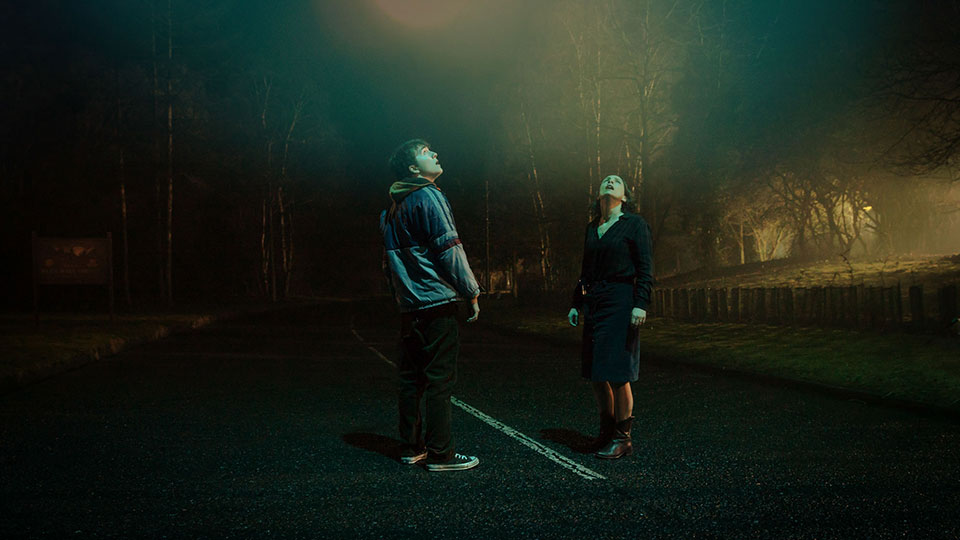 Olivia (Laura Fraser) and Ray (Mel Raido) leave their daughter Maisie at home while they go out. On their return they find the front door open and Maisie gone, with only a shattered family photo suggesting that anyone has been in the house. A year later, Olivia and Ray’s relationship is strained but they bring their family together on the anniversary of Maisie’s disappearance. As tensions begin to rise, strange occurrences start to take place outside the house and the answer to Maisie’s disappearance may be out of this world.

Dark Encounter comes from writer and director Carl Strathie. The Yorkshire-filmed science-fiction drama is set in Pennsylvania with the majority British cast putting on convincing American accents. Starting off strong, the film has a lot going for it. The mystery of Maisie’s disappearance is an intriguing one and the way the grief and tension plays out between the family members is compelling. Olivia and Ray’s son Noah (Spike White) takes the brunt of his parents’ marriage breakdown while police officer Kenneth (Grant Masters), who is married to Olivia’s sister Arlene (Alice Lowe), blames himself for not having been able to find Maisie following her disappearance.

Things take a supernatural turn when its suggested that aliens are tormenting the family, with different members disappearing one-by-one over the duration of the film. Are they being abducted by aliens or is there something else going on? It would be a spoiler to reveal too much more but this is where my problem came in with the film. The eventual reveal and explanation for Maisie’s disappearance doesn’t make a whole lot of sense with the alien storyline that dominates much of the film. Perhaps I simply missed some of the nuances but by the end of the film I felt that it didn’t deliver on the promise of the first half, and that’s something that I was worried about very early on.

It’s a real shame because the film looks great and you’d never know it had been filmed in Yorkshire. The cast is also very good with Laura Fraser and Mel Raido bringing real gravitas to the screen. They are believable as a struggling married couple and both actors have impressive range. Alice Lowe is memorable, if not a bit under-used as Arlene, while Sid Phoenix, Grant Masters, Vincent Regan and Spike White all provide able support. There isn’t a weak link in the cast.

Dark Encounter left me disappointed. I was with the story right up until the final moments and then I felt a bit cheated. With such a strong first half, I really thought this was going to be one of the big surprises of Arrow Video FrightFest. Instead, for me, it was a mix of great ideas that never really fully realised their potential. Visually it’s great and the cast is excellent but the plot didn’t come together in a way that was cohesive enough for me to feel fully satisfied.