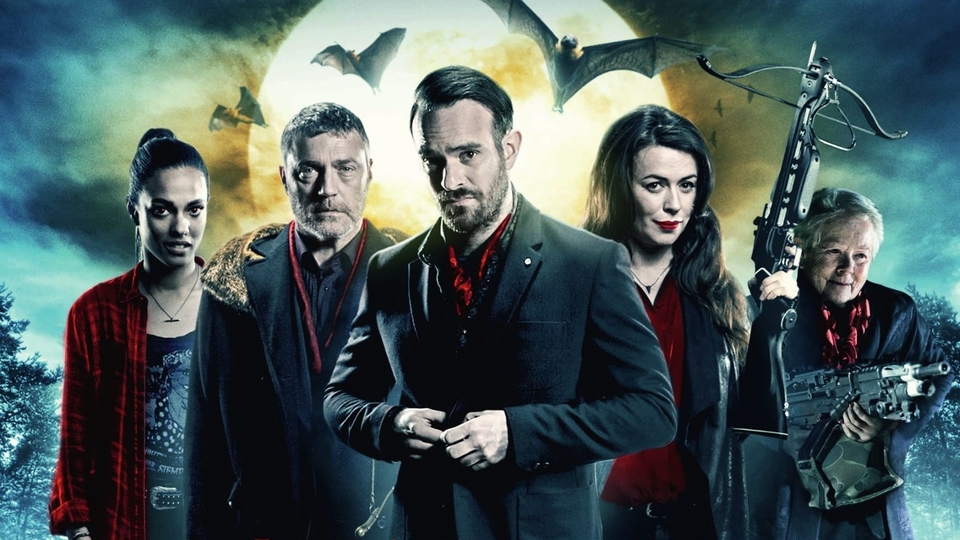 If low-budget British horror is your bag then Eat Locals delivers an enjoyable but light piece of escapist horror fun. With Jason Flemyng taking on his first directorial role, he’s called in a few favours and filled the film out with plenty of familiar faces to bring this promising vampire story to the big screen.

Boiled down, Eat Locals is actually a stand-off film between vampires and soldiers set on a farm. A group of Vampires, whose glory days have long since passed, convene in a quiet British farmhouse to discuss important matters until a special army unit who have been tracking their whereabouts approaches the perimeter, thus forcing a conflict.

It feels like a stage play in some respects, and I could see Danny King’s screenplay adapted to theatre quite easily. With Film, there’s an opportunity to raise the bar, and the bones of the script suggests that Eat Locals could do just that. There are so many unexplored facets to the story that could have benefitted with much more screen time, which is a shame come the end credits. By that time, it feels like a missed opportunity but perhaps a continuation of this story in a sequel could yield greater rewards?

For its worth, Eat Locals still delivers an enjoyable low-budget romp. There are gentle gags along the way that raises wry smiles, if not actual belly laughs, but if watching Victor Meldrew’s wife using a sub machine gun is your idea of fun then this will be right up your street! There’s even an interesting post-Brexit angle explored at the start, which is both relevant and clever.

The cast are all game for a laugh with Daredevil himself Charlie Cox leading the line as Henry, a vampire who chooses not to eat humans. Peter Boniface, played by Tony Curran, is the most menacing (and by extension, the most interesting) character in the mix and he does really well here. He even utters this gem of a line (which was a personal highlight for me) – ‘I’m not racist… I’ll kill anyone, no matter where they’re from. It doesn’t bother me’.

Elsewhere there are cameos from farmer-couple Dexter Fletcher and Ruth Jones, but they could have been in it much more and used to greater effect. Freema Agyeman was also under-used but the lovely Eve Myles is on-hand for some of the film’s funnier moments. Billy Cook steals the film as a cockney wide-boy who is unwittingly thrown into this confrontation and Robert Portal is always brilliant, this time as an army general with an ulterior motive. I was hoping for more from Annette Crosbie’s character Alice who, like the other characters, isn’t really afforded the time to really build upon her back-story enough.

Eat Locals always threatens to be amazing but tows the line of low budget horror that doesn’t quite take enough risks. But for the most part it’s an entertaining ride and one that could bring about a sequel or two, such is the solid foundation that this film is built upon. I wanted to know more about the history of Mackenzie Crook’s character (another talent used too sparingly here), the mythology of the Vampire council and the mysterious company that is brilliantly teased at the end of the film. But for all of that, Eat Locals still delivers a great British Halloween treat for the season and it’s worth it alone for Lukaz Leong’s fantastic martial arts vampire fight sequence midway through!