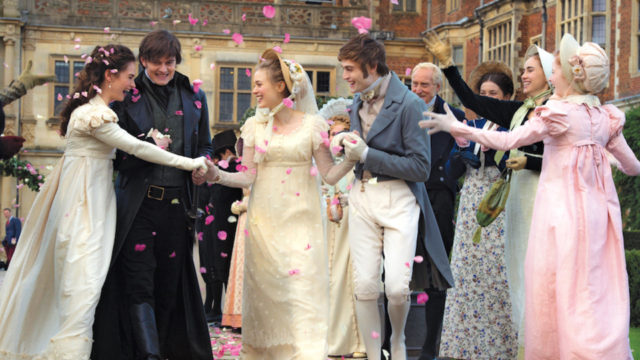 Valentine’s Day is almost upon us and that means romantic movies are everywhere! Watching a well-loved film with your other half is one of the nation’s favourite pastimes, especially on Valentine’s Day. There’s plenty of choice out there too, with romantic dramas, comedies, weepies, and epics all ready to be devoured.

Everyone loves the greats, be it golden era gems like Brief Encounter, Roman Holiday and Casablanca, 80s & 90s stalwarts Dirty Dancing and Pretty Woman or modern classics like Titanic and Romeo and Juliet. But if you are looking for something a bit different this Valentine’s Day, where do you go?

Check out these five films – they are all great, all a bit different and crucially, they are all centred on true love. With a current theatrical release in the mix and some classics to enjoy on home entertainment platforms like Sky, Netflix and Amazon Prime, there’s never been a better time to catch a slightly offbeat love story with your loved one!

Pride and Prejudice and Zombies

This current cinematic release takes the classic traits of Jane Austen’s seminal book and adds a sense of decomposing danger! The Bennet sisters are on the look-out for eligible husbands but also have to keep a keen eye out for brain-eating Zombies who are terrorizing 19th century London. However, all of this takes a backseat to burgeoning romantic tensions and courtship woes, especially between Lily James’ headstrong and confident Elizabeth and the dashing but mysterious Mr. Darcy, played to perfection by Sam Riley. A film that stays centred on love even through mass zombie killings.

Read our review of Pride and Prejudice and Zombies

This forgotten gem from 2011 stars Matt Damon and Emily Blunt as star-crossed lovers destined to be apart. But this is Matt Damon we are talking about, so he fights the system to be together with the woman he loves – even though mysterious suited beings are doing their utmost to keep them separated. Co-starring Anthony Mackie, John Slattery and Terence Stamp, this is a wonderful story, coupled with sensational performances from both Damon and the gorgeous Emily Blunt.

From all outward appearances, this 2009 effort from director Marc Webb and writers Scott Neustadter and Michael H. Weber is your typical rom-com. But as the opening voiceover bluntly states, this is not a love story. What follows is a modern classic – a film bursting with invention and style that perfectly captures the lifecycle of a relationship. Crucially, it also focuses on the male perspective and delivers a film that resonates with anyone caught up in similar situations. Zooey Deschanel and Joseph Gordon-Levitt have also never been better in this outstanding study into modern affairs of the heart. Having an amazing soundtrack also doesn’t hurt!

What’s wrong with a man falling in love with a mannequin? This 80s classic is a rom-com in the traditional sense, but having one half of the couple be a store dummy certain changes things. Teen comedy legend Andrew McCarthy falls for Egyptian princess Emmy (Sex and the City star Kim Cattrall), after her mannequin magically comes to life. The only trouble is he’s the only one who can see her alive. Zany 80s laughs, James Spader playing a creepy store manager and a cracking soundtrack featuring Starship’s anthemic ‘Nothing’s Gonna Stop Us Now’ makes this an off-beat Valentine’s classic.

Easily one of the most romantic movies of the 80s, young Ralph Macchio gets beaten up, run off a hill and literally has sand kicked in his face all for the affections of the stunning Elisabeth Shue. It’s a fair deal if you ask me. The story may be remembered for its wax on, wax off training montages and fantastic finale but it’s also a brilliant tale of young love, with a popular girl falling for a regular guy from the wrong side of the tracks. As Peter Cetera’s title track to the sequel proclaimed, he ‘did it all for the glory of love’.

What are your favourite alternative Valentine’s Day movies? Let us know in the comments below.