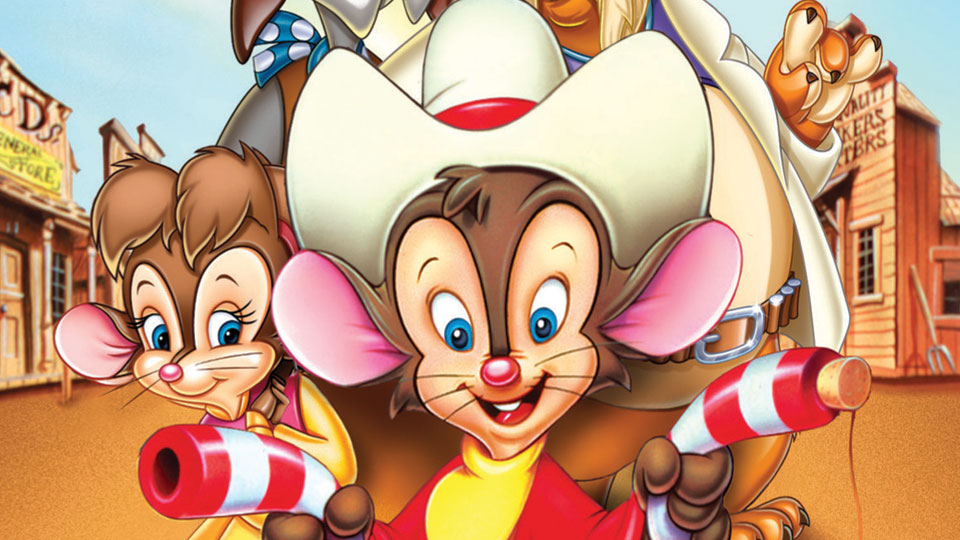 The adventures of the animated Jewish mouse and his Russian emigre family started with the heart-warming feature An American Tail in 1986. This 1991 sequel, and the final big screen outing for the Mousekewitz family to date, sees Fievel’s family uprooted once again, with mean cats clearing New York of its mouse population and relocating them to the Wild West.

Running to not much over an hour, Fievel Goes West is a targeted at a young audience, and packs in plenty of adventure, songs, comedy and morals to keep attention-deficient little ones entertained and engaged for a relatively brief period. For the rest of the family, there are cracking vocal performances by top names to enjoy. John Cleese relishes every word he utters as Cat R. Waul (get it?), the conniving, dandified feline villain. One of Hollywood’s biggest stars, James Stewart, bows out from the acting world by lending his mellifluous, and by this time decrepit and croaky voice to the elderly dog sheriff, Wylie Burp. Most of the cast from the original movie reassemble for this one, so Fievel is once again voiced by Phillip Glasser, with Dom DeLuise reprising his part as Tiger, Fievel’s good-cat, wise-cracking friend.

Fievel Goes West is competently put together and fun, but it falls down on originality. The poignancy of the original movie is that it tapped into genuine experiences of refugees and placed them within a wholesome family adventure story. Fievel being cut off from his family evoked the fate of millions of evacuees. This time around, Fievel is again cut off from his family, but it feels more like a ploy to repeat a winning formula than an inherently workable story, and the promising opening pogrom storyline quickly fizzles out into silliness: Cat A Waul concocts a nefarious wheeze to pack all the mice off to the Wild West and then eat them. But why not just round them up and eat them in New York and save considerable time and expense?

Still, a daft plot and a substantially diminished return are the biggest criticisms that can be levelled at Fievel Goes West. There are excellent set-pieces, and the lovably-drawling James Stewart is value for money as the mentor character. There are witty ditties from the pen of the late James Horner that kids will enjoy singing along to. It’s a title that’s likely to be loved by younger viewers, though it has less universal appeal than the original, because the themes aren’t as rooted in human experience so it packs less of an emotional punch. The animation is beautiful, and refreshing stark in places, the muted colours a treat for the mature eye.