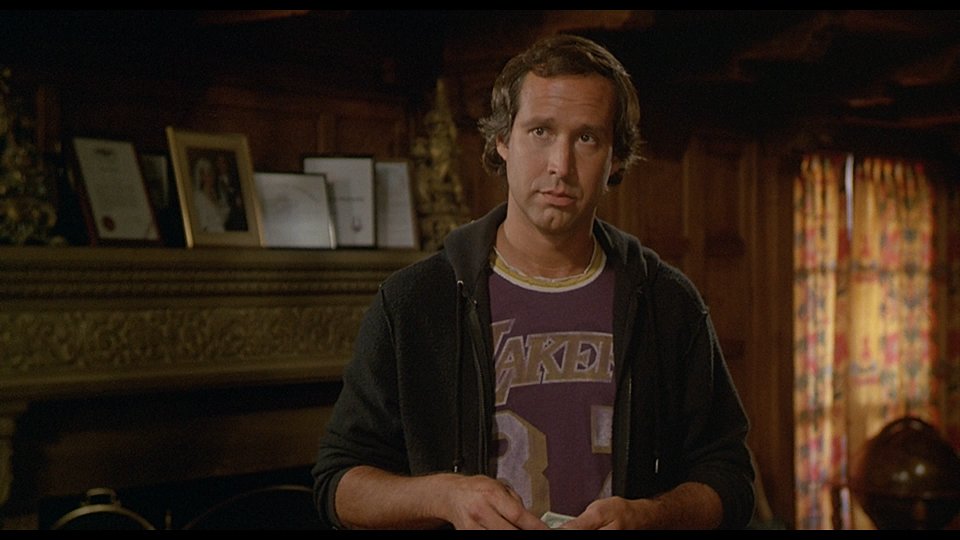 If you were slightly unsure about what decade “Fletch” was made, the music over the opening credits will swiftly remove any doubt. We are in the 80’s my friends.

Based on the popular mystery novels written by Gregory McDonald, the film loosely follows the plot of the first book, with undercover reporter Irwin M. Fletcher (Chevy Chase) investigating the drug trade on a local LA beach. Posing as a beach bum junkie, Fletch is approached by Alan Stanwyk (Tim Matheson) a rich businessman who claims to be dying of bone cancer. Not wanting to suffer a slow, painful death – and committing suicide will void his insurance policy – he offers Fletch $50,000 to break into his home in a few days time and kill him. Sensing there could be a story in this, Fletch agrees to the deal, and starts investigating Stanwyk.

The narrative stumbles into gear, and the film wearily adopts every trope of the classic gumshoe flicks of the 40’s and 50’s, right down to the film-noir lampooning voice over. There’s a beautiful dame with a scumbag husband. A labyrinthine plot. A dodgy land deal. Honest crooks and dirty cops. In a different decade, in different hands this could have been a decent thriller.

In the hands of director Michael Ritchie and his improvising leading man however, the film frequently detours into the realm of a comedy sketch show. Chase adopts a series of rapid-fire personas, complete with wigs, outfits and dubious disguises in his attempts to get to the bottom of his investigation.

Some of this is quite funny. The hospital sequence, as he attempts to locate Stanwyk’s medical records is a comedic high point. On the flip side there are also scenes such as the pointless dream sequence, where he imagines himself as the star player for the LA Lakers, complete with cringe-inducing afro. Not so funny.

Despite a few missteps and dud gags, Chase remains the main reason for watching “Fletch”. The film skates by on his charm, impeccable timing and outstanding dead-pan delivery. Unfortunately this is also the reason that the film doesn’t entirely work. No matter what happens to him over the course of the film – and believe me, a lot happens – none of it registers in the slightest. Never at any point does Fletch waiver from the classic “SNL Chevy Chase character”.

He just cracks wise and keeps on moving. So yes it is funny, but it’s more of a showcase for Chase than an actual film.

A quick word on Harold Faltermeyer’s signature synth score. Sandwiched between his two most famous soundtracks (Beverly Hills Cop and Top Gun), this does not compare favourably with either, and is overused to the point of parody. It really begins to grate.

If you’re a fan of Chevy Chase, then the chances are you already own this film and love it dearly. If you’re not, then “Fletch” is unlikely to change your mind.