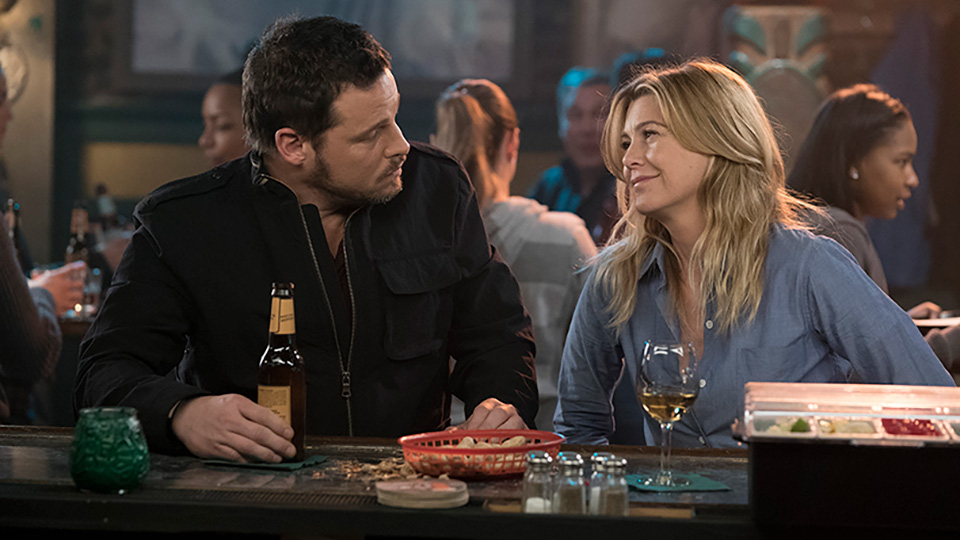 If you haven’t seen the season 14 finale and want to avoid spoilers, we suggest you stop reading now. If you have seen it and want to hear our thoughts, carry on reading.

April Kepner (Sarah Drew), who almost died in the penultimate episode, had a spur of the moment wedding to Matthew (Justin Bruening) in the season finale after Jo (Camilla Luddington) and Alex’s (Justin Chambers) wedding failed to go to plan. She also quit her job and decided to do God’s work now she’d found her faith again.

The season finale also said goodbye to Arizona Robbins (Jessica Capshaw) who decided to move to New York with her daughter so they could be closer to Callie (Sara Ramirez) and she could open her new women’s centre with Dr. Nicole Herman (Geena Davis). There was hope for a Calzona reunion too after Arizona admitted she was excited to see her ex again.

With those changes having taken place and a shock return for Teddy Altman (Kim Raver), who appears to be carrying Owen Hunt’s (Kevin McKidd) baby and is taking over from Bailey (Chandra Wilson) as Chief on an interim basis, season 15 is shaping up to be quite a must-see event.

On the happier side of things Jo and Alex did get married by Meredith Grey (Ellen Pompeo) on a ferry and it looked like Jo and/or Alex could be moving across the country so Jo could pursue an internship. There’s still a chance that Jo could accept Meredith’s job offer though so time will tell.

Ahead of season 15 premiering later this year, I’ve had a think about what I want to see from the long-running medical drama when it returns…

1. The focus on Meredith to be around her job. It was refreshing to see Meredith independent of a love interest during season 14. Once Riggs (Martin Henderson) left with Megan Hunt (Abigail Spencer), Meredith threw herself back into her work, won a Harper Avery (although she gave it back) and carried out ground-breaking research on mini-livers with the help of Jo. It was far more interesting seeing Meredith concentrating on her research and mentoring Jo. I want plenty more of that.

2. Jaggie haters to get over it and get on board. Personally I love the pairing of Jackson Avery (Jesse Williams) and Maggie Pierce (Kelly McCreary). I always felt Jackson and April were better as friends, and it seems the writers came to that conclusion too. I do feel a chemistry between Jackson and Maggie and with April no longer on the scene, they can really explore their relationship.

3. Jo to stay at Grey Sloan. She’s had her detractors over the years but I actually think that Jo and Alex have become a beacon of hope on the show. Jo is great at her job, clearly capable of matching or even bettering Meredith’s achievements in the future, and she brings a lighter touch to the show, now her dark past has been dealt with. I won’t be surprised if she stays by Meredith’s side.

4. The love triangle between Teddy, Owen and Amelia (Caterina Scorsone) to surprise us. The writers managed to pull off an oddly touching and emotional triangle with Meredith, Riggs and Megan so I hope they do similar with this latest love triangle. Owen and Amelia were in the midst of reconciling so I hope that Teddy isn’t used to drive them apart again. After all Teddy threw Owen out after learning he’d been with Amelia 24 hours earlier and I’ve actually come around to the idea of Owen and Amelia being end game.

5. Speaking of Amelia and Owen, I liked their concurrent parenting storylines. Pairing Amelia with Betty (Peyton Kennedy) actually worked well and I feel it’s helped her to grow as a person. I hope Betty hasn’t just disappeared when the show returns and that the storyline continues through to a real conclusion. It’s been a great way of humanising Amelia more and converting some of her detractors since the character pretty much had a reset following her brain tumour.

6. DeLuca (Giacomo Gianniotti) to get a decent storyline. I’m already over the Sam (Jeanine Mason) storyline and I hope DeLuca is over his moping around when season 15 kicks off. I was surprised by how much I was interested in him having a potential fling with Meredith following that kiss at the wedding but it would be a bit icky seeing as he’s been with Maggie too. It’s time for him to really fit in as a main character, the way Jo has.

7. More pairing together of Bailey and Richard (James Pickens Jr). These two have been through the mill in recent seasons but they’ve come out of it stronger. With Bailey taking a sabbatical to concentrate on her new-found wealth and success, I hope the writers find plenty of reason to keep Bailey and Richard on-screen together.

8. More development for the interns. A few of them got a bit of development in season 14 but none of them are especially memorable right now. They are such a varied bunch with very different traits so I’d like to see those developed more as they integrate better with the main cast.

9. More nods to the past. Season 14 had a lighter tone, more in line with the show’s earlier seasons, and we saw the return of several characters too. It was a nice way of remembering and honouring the show’s history, while driving the story forward. I’d like to see some other familiar faces come back but I’m not holding out for a return for Cristina (Sandra Oh) just yet.

10. A strong crossover with Station 19. I feel like the two shows work really well together and I like that Bailey, Ben (Jason George) and Meredith pop across from one show to the other. There’s a natural overlap for the shows and I wouldn’t be opposed to an annual crossover event that sees Grey Sloan and Station 19 working together to get through an epic disaster.

Grey’s Anatomy returns for season 15 on ABC in the US and Sky Living HD in the UK this autumn.