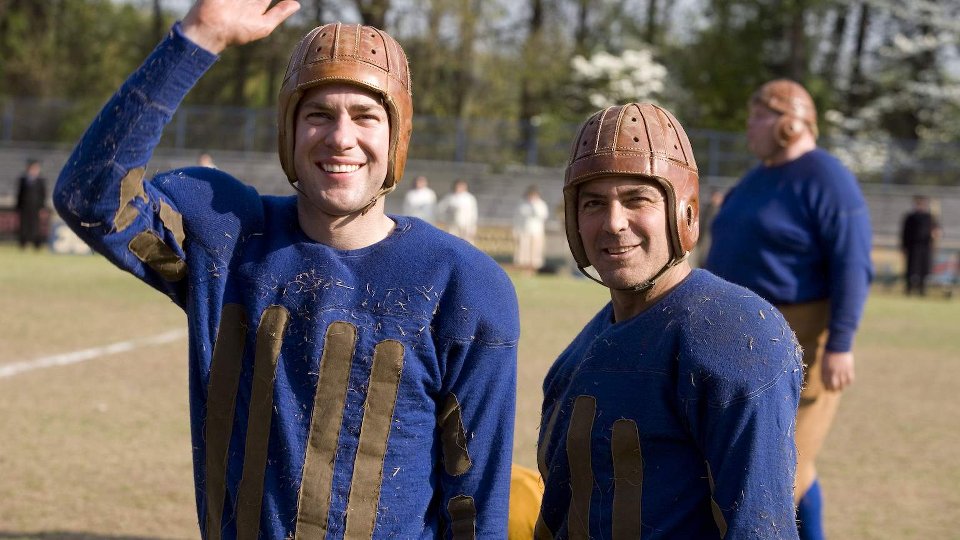 Leatherheads is a film out of time. Released in 2008, set in 1925, and paying homage to the screwball classics of the 1940’s, it is a very odd addition to George Clooney’s filmography as a director. After an impressive debut with Confessions of a Dangerous Mind and the McCarthyism newsroom drama of Goodnight and Good Luck, Clooney seemed to be establishing himself as the next big actor turned director. A director with a socio-political conscious, aiming to make important and thought-provoking cinema.

Dare I say it, the next Robert Redford.

Then he made Leatherheads. Which isn’t to suggest that it’s a complete flop, more that it represents a bizarre side step into shall we say, unfamiliar terrain for the director.

He does his damnedest to evoke the era – sepia tinged soft focus cinematography, time passing montages complete with old newsreel and ‘papers coming off the press – and the whole thing bouncing along to Randy Newman’s jaunty jazz score. These stylistic touches however, cannot hide the flaws in what is a very uneven and underwhelming film.

The plot centres around the early years of professional American Football (stay with me), and the antics of Duluth Bulldogs captain, “Dodge” Connelly (Clooney) as he attempts to save the financially hampered sport from collapsing. He approaches war hero turned college football star Carter “The Bullet” Rutherford (John Krasinski), hoping that the younger man’s fame will give the sport a boost it so desperately needs.

Thrown into the middle of this is Lexie Littleton (Renee Zellweger), a reporter for the Chicago Tribune, sent to find proof that Carter’s wartime heroism might in fact be somewhat less than heroic. Both men fall for the plucky gal, and antics inevitably ensue.

The problem however, is that the main trio lack the sufficient chemistry to make the antics work. Granted, it is a very tough proposition to re-create a screwball romantic comedy for a contemporary audience. But if you’re going to attempt it, then you need more spark and more pace than what is on display in Leatherheads. A raid on a speakeasy, staged as a big comic set piece is an ill-judged foray into farce.

As for the star cast, Clooney – playing Dodge as a variation on one of his Coen-esque American idiots – is phoning it in. He can work this sort of material in his sleep. Unfortunately, he must have been sleeping when he should have been directing Zellweger. She is not good in this film.

If you want to watch an American sports film about a woman caught between the affections and attentions of two men, then watch Bull Durham instead.