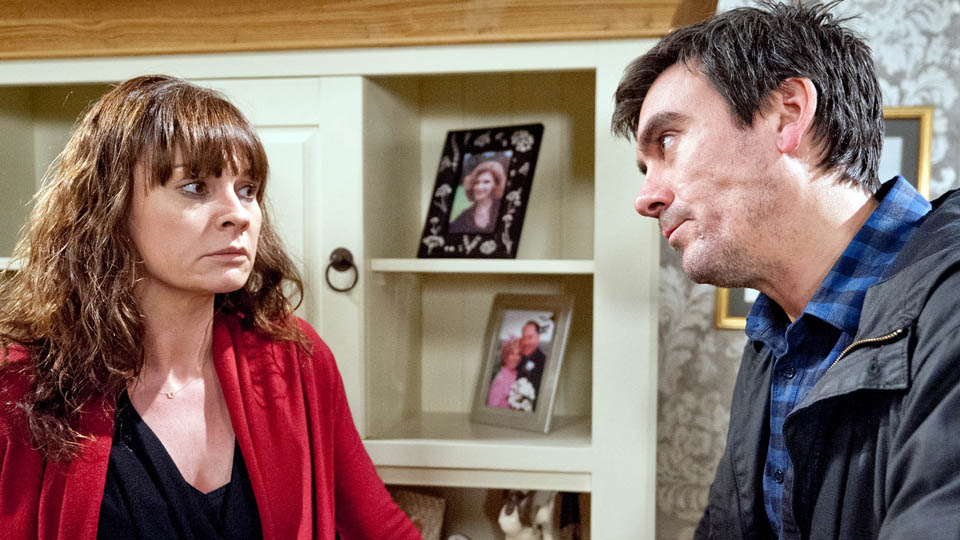 It’s been an emotional few weeks for Aaron and this week shows no signs of that slowing down.  Kirin is struggling with fatherhood, Carly reveals a secret and Paddy panics over Tess’ antics.

Read on to find out what drama is in store for the residents of Emmerdale this week:

Aaron goes to the police about Gordon

Aaron bravely decides to report Gordon to the police for sexually abusing him as a child, but worries how he can prove the allegations.  Cain tells the rest of the family and Robert is glad that Aaron has gone to the police.  Could it be that Gordon will face up to his crimes?

It seems Gordon has other plans.  He threatens to get Cain sent down for attempted murder unless Aaron agrees to tell the police that he made up the abuse allegations.  He is adamant that Aaron can’t win, leaving Aaron shaken.  He tells Chas about Gordon’s ultimatum and she’s shocked when he says he’s leaving the village.  She later refuses to tell Robert where Aaron has gone, but is taken aback by his genuine concern and emotion for her son.

Kirin is struggling with baby Johnny

Vanessa comes down with the norovirus and is advised to stay away from Johnny for a couple of days leaving Kirin to look after him.  He doesn’t take to the job too well and grabs a can of beer and turns up the music to drown out Johnny’s constant crying.  He’s at the end of his tether as he screams in Johnny’s face and is caught by Carly who takes Johnny away from him.  He pleads for her not to tell Vanessa and is relieved when she returns later with Johnny.

When an ambulance arrives, Carly jumps to the wrong conclusion thinking Kirin has harmed Johnny, leaving Vanessa completely confused.  Kirin is sent on his way and soon hits the bottle to drown his sorrows and narrowly avoids knocking over Brenda when he gets behind the wheel of his car, well over the limit.

Meanwhile, Carly and Tracy fall out and it seems Carly is harboring a baby secret of her own.

Paddy is panicked by Tess’ actions

April says that Tess was crying at school and it leaves Paddy feeling guilty.  He wants to call her, but decides that his family comes first and resists.  Meanwhile, Tess opens up to Rhona that she’s been seeing a married man and Rhona tells her she’s got to do whatever makes her happy.  Paddy worries when Rhona tells him what Tess said and that she plans to move to the village too.

Despite his warnings to stop calling him, Paddy is freaked out when Tess arrives in the village and tells him she wants him to leave Rhona and be with her.  He struggles to hold back his anger and tells her to go as she piles on the pressure, eventually taking out her frustration by throwing a glass at the wall before getting in her car and driving off.  She pulls into a layby and sobbing, she dials Rhona’s number.  Rhona agrees to meet with her and when Paddy finds out he panics and tries to dissuade Rhona telling her that Tess made a pass at Marlon.  Will he be able to wangle his way out of this situation or will Tess spill the beans to Rhona?

Gabby finds Kerry and Dan’s sex tape on the computer and rather than delete it she shares it!  It seems to be the start of Gabby going off the rails as she later draws eyebrows on herself and freaks out when she overhears Ashley and Laurel talking about the baby.

Carly says the wrong thing to Nikhil about Leyla and Jai’s sex life and as he tries to prove his prowess, Leyla rushes to the toilet to be sick;  she’s caught the norovirus.  Later, in a delirious state she tells him she thinks they should get married.

Adam and Nicola lock horns as she starts working in the scrap yard office, taking over Jimmy’s haulage business duties.