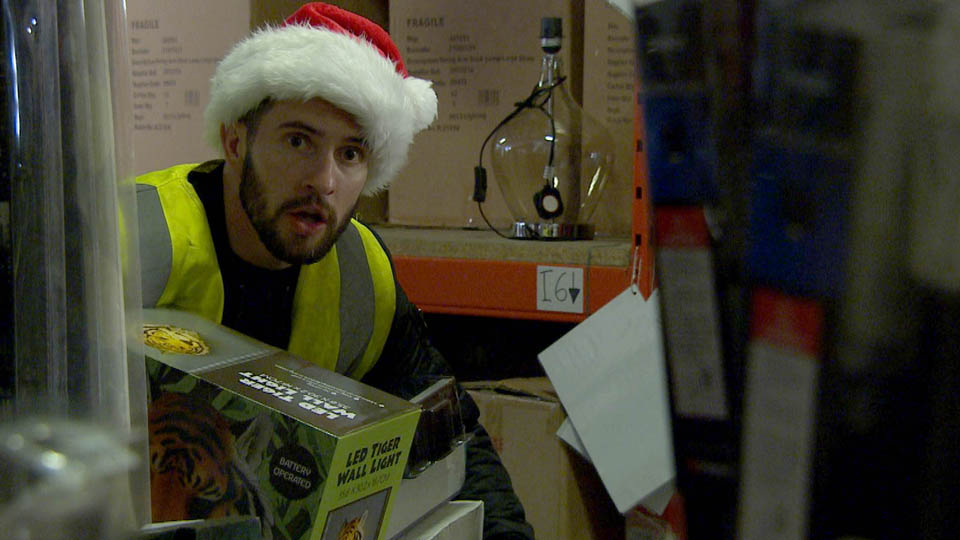 It’s Christmas week in the Dales, so what better way to celebrate than with a bit of robbery, adultery and heartbreak!  Plus there’s a Coronation Street legend making a guest appearance on Christmas Day.  Read on to find out what’s in store for the week ahead…

Aaron helps Ross with a robbery

Worried that Robert wants to buy Diane’s share of The Woolpack, Aaron looks into taking money out of the scrap yard so he can put a deposit down on the pub himself, but Adam isn’t keen.  Meanwhile, Diane meets Aaron’s father, Gordon and when she fills him in on Aaron’s troubled past he suggests offering Aaron a lifeline.

Ross asks Aaron to help him with a robbery he’s planning in order to get money for Christmas.  Initially Aaron isn’t interested, but when Gordon turns up in the village and offers to give Aaron the money to buy the pub, he jumps in the van with Ross deciding to go through with the job after all.

Chas returns to the village and is shocked by Diane’s news that she wants to sell her half of the pub and even more stunned when she learns that Gordon is back on the scene.

Later, Ross fills Aaron in on the job they are doing;  they are going to rob a warehouse and Aaron’s role is to be the look out.  As Ross heads inside, Aaron waits outside and is soon questioned by a worker who doesn’t recognize him.  Will Aaron do something he might regret in his panic?

When the warehouse robbery comes on the news, Aaron freezes and has to cover that his pile of cash is from the scrapyard. Chas ropes him into coming to the nativity but he’s shaken to see an image of himself in the paper. Later, Chas is floored when Gordon shows her the article and she refuses to believe it’s her son. During the nativity, DS Hart arrives, wanting to talk to Aaron about the warehouse robbery. Will he get out of this situation before Christmas?

David is still determined to track down Val’s engagement ring and sets up a web page offering a £500 reward for it’s return.  Gabby shows Lachlan the website and he begins to plot how he can return it and claim the reward without landing himself in it as the culprit who stole it in the first place.

Nikhil and Leyla are worried when David receives a photo of the ring and instructions to leave the money behind the village hall if he wants the ring back.  As David prepares to make the drop, they secretly hide in the village hall to see who comes to collect the money.

David is aghast to find the money has gone but no ring has been left.  He’s angry at himself for falling for the con, but Leyla and Nikhil have a confession to make.

Later, Bernice comes across a phone with all the ransom texts, will she confront Lachlan and Gabby and will she tell David?

Zak and Joanie are seen kissing

Joanie has told everyone she’s got a singing gig at a swanky hotel so Zak is thrown when he sees an advert in the paper showing that she’s really singing at a working man’s club instead.  He heads to the club and seems unable to resist her.  Turns out the owner of the club is a bit of a tyrant and Zak has to come to Joanie’s rescue.

Later, trouble follows them to the Dingles house when the tyrant turns up demanding money for what they stole.  Zak gets Cain to sort him out.  As Zak and Joanie share a kiss, they are unaware that Belle has seen them and is distraught.  She tells Lachlan that Joanie will pay for he mistake, but how?

As Christmas Day arrives and so Belle’s birthday, the Dingles are having a family get together and it’s clear that Belle is struggling to hide her hatred of Joanie and that makes Zak suspicious of what she knows.  He starts to worry that she will tell everyone about him and Joanie and ruin their Christmas.  Can outspoken Belle keep her mouth shut?

There’s a troublesome guest at the B&B (played by Liz Dawn aka Vera Duckworth!) who has Finn and Tracy flustered on Christmas Day.

Eric Pollard finally comes out of his house to be faced with his past, present and future and just maybe he’ll have a Merry Christmas after all?

Harriet is devastated when she sees Ashley and Laurel kissing.  The pair announce they are back together and Laurel is going to be there for Ashley with the tough times ahead.