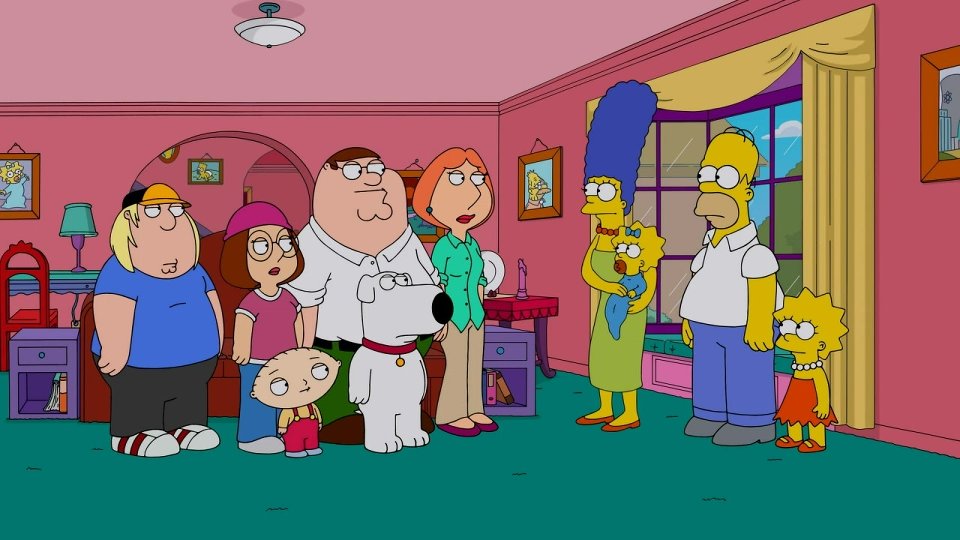 Animated comedy Family Guy has been going since 1999 and having made a comeback following cancellation in 2003, the edgy series has provided many belly laughs and a whole load of controversy. Now in its 14th season in the US (which would be its 16th here in the UK as the boxsets were split different to the original seasons), the show continues to attract a loyal fanbase and there’s even talk of a big screen adventure for the Griffin family. In the UK season 15 (season 13 in the US) has arrived on DVD just in time for Christmas.

Family Guy’s 15th season opens with the much-lauded crossover episode with The Simpsons. The two shows have been friendly rivals for years and have poked fun at one another in various episodes. Now the two shows co-exist in the special extended episode The Simpsons Guy, which finds the Griffins leaving Quahog and ending up in Springfield after their car is stolen. The two families realised that their respective families weren’t all that different and a hilarious fight ensues when Homer and Peter realise that Pawtucket Beer is a cheap knock-off of Duff. The crossover is everything you hoped it would be and so much more.

The rest of the season is business as usual for the Griffins who get into a variety of far-fetched situations always keeping their tongues firmly in their cheeks and making fun of pop culture. Joe Swanson is left angered when Peter takes all the credit for a children’s book he wrote in The Book of Joe, Lois and Peter open a cookie shop in Baking Bad, Peter and Brian embark on a quest for a new turkey after Peter drunkenly eats the Griffins’ one the night before Thanksgiving, and Chris embarks on a journey with Stewie and Brian in Stewie, Chris & Brian’s Excellent Adventure.

My favourite episode of the season comes on the spectacular The 2000-Year Old Virgin where Peter finds Jesus in the mall and is shocked to discover that he’s never had sex. Peter enlists the help of Cleveland, Quagmire and Joe to help Jesus lose his virginity in time for his birthday. Of course the episode is likely to upset some people but I found it absolutely hilarious.

The season comes to an end with Peter and Lois heading to the Bahamas for what he thinks is going to be a nice relaxing holiday but turns out to be marriage counselling.

Special features on the release include a selection of deleted scenes, audio commentaries, a featurette on The Simpsons crossover episode, and a full episode animatic for Stewie, Chris & Brian’s Excellent Adventure.

Family Guy Season 15 may not be as consistently hilarious as it used to be but when it hits the mark, it really delivers. It’s incredible to think that the show has been on air for 16 years now and I hope that talk of a big screen outing comes off. If you prefer your comedy un-PC and edgy then Family Guy will satisfy you every single time.