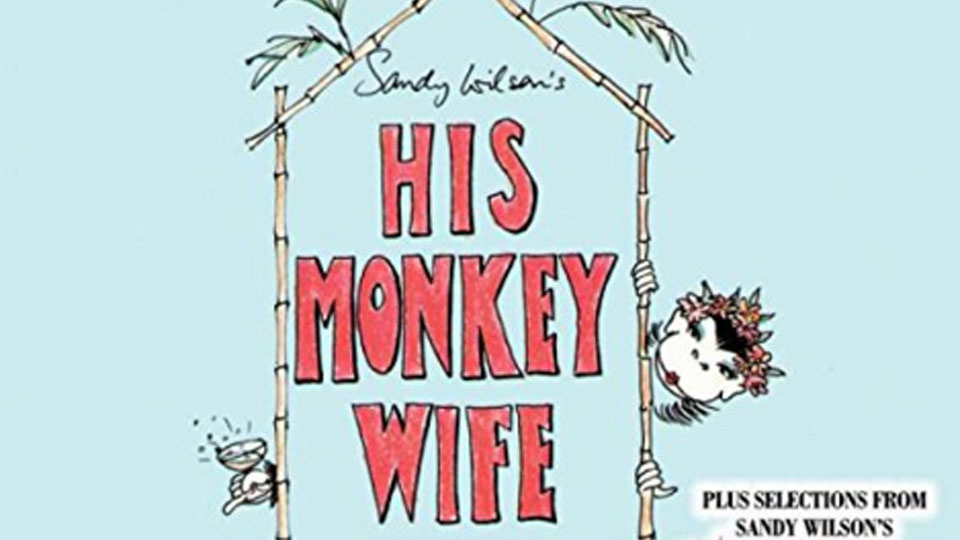 Sandy Wilson’s His Monkey Life makes up the first half of this CD release, with a recording of the Hampstead Theatre Club production of 1971. There’s also selections from Wilson’s take on Aladdin, again recorded with the original London cast from a Lyric Theatre Hammersmith 1979 production. The cover artwork is taken from Wilson’s own illustration for the original His Monkey Wife programme.

In fitting with the Stage Door catalogue, these two recordings are rare indeed – and the musicals rarely-performed, though they certainly deserve another look. Sandy Wilson wrote the much-loved 1953 musical The Boy Friend, though his later musicals weren’t quite so accessible, which perhaps explains their relative obscurity despite the brains and talent behind them.

It doesn’t take an awfully long time to see why His Monkey Wife has rarely been seen on the stage – it’s nothing to do with the quality of the song-writing, which is very good, or the book, which is lively and witty – but the concept itself is a little unusual (read: uncommercial). Wilson based his musical on John Collier’s book of the same name. The overall plot sees a chimpanzee called Emily falling in love with her master, Alfred, and marrying him before he can be joined in matrimony to his awful fiancée Fern. A traditional love story it isn’t. The title of the piece stems from the hysteria that results from the union, and monkey references are distressingly scattered throughout the lyrics: distressing since chimpanzees (like humans, their nearest cousins) are apes, and decidedly not monkeys… The shoddy science is perhaps most notable in the song Dear Human Race that contains the well-intentioned howler, “may we tell you to your face, that they could have saved a lot of bother and fuss, if evolution had ended with us”.

It’s a little churlish to make a point of that, since the musical is hardly meant to be a realistic account of inter-species marriage, but more an allegorical look at human relationships and other follies; though the major weakness of the show is that it’s only obviously allegorical fleetingly, so its thematic lightness draws attention to the craziness of the story and leaves one wondering what point the author is trying to make. There are moments where it is thematically successful, such as with the terrific song Marriage, which is a deliciously cynical look at the institution that has traditionally benefited men – from a feminine point of view. The plot takes all kinds of strange twists and turns (an excellent booklet gives synopses of the two acts, as well as background information about the show), but it’s the second act that really takes off, sending the characters on separate adventures. The most entertaining diversion is when Emily is lured by an unscrupulous agent into the limelight of the West End, which results in the songs A Girl Like You and Doing the Chimpanzee.

The musical accompaniment is simple yet elegant, with piano carrying the melody for most of the production, and the songs are mostly cheerful and upbeat. There aren’t any household names in the cast, but some will tickle the fancy of British character actor aficionados. Robert Swann plays the lead role of Alfred, and he had a major supporting role in Lindsay Anderson’s “….if”, as well as a healthy list of credits after that. The recently-deceased Jeffry Wickham plays a variety of parts, his trademark upper-class voice readily recognisable in Mad About Your Mind, a rather eccentric courting number, though it’s disguised in A Girl Like You, in which he plays a theatrical agent. The fabulous Roland Curram (most memorable for his role in Schlesinger’s Darling) plays the small role of Denis, one of Fern’s gossipy friends, and gets the song Who Is She to himself.

The highlights included for Aladdin (recorded at the Abbey Road Studios) are also musically satisfying, and based on Arabian Nights rather than on any of the previous versions. Although intended as a Christmas production, this Aladdin is a musical for educated children rather than pantomime, and again it boasts a fine cast. Aubrey Woods (Willy Wonka and the Chocolate Factory) plays the wicked Abanazar and gets the best song – Wicked – to himself, which he clearly relished. Belinda Lang (2point4 Children) plays The Genie of the Ring. The trouble that Aladdin often runs into now is difficulty with not offending our cultural sensitivities, and a western cast adopting Chinese names is a little more awkward these days. Nevertheless, it’s light good fun; though we found His Monkey Wife a more rounded production overall.