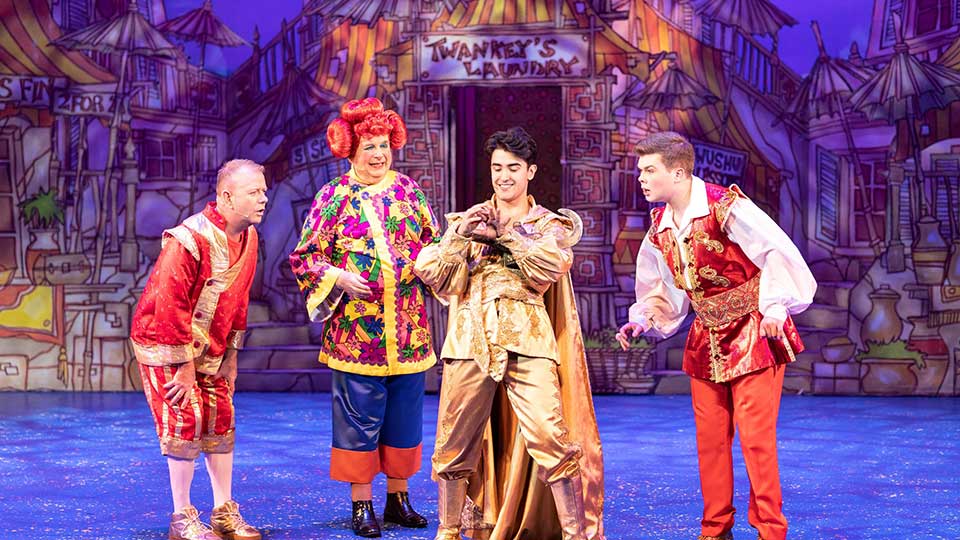 Oh yes it is! Panto season is here again, and the Churchill Theatre in Bromley has a treat in store for families. Aladdin runs there until January 5th. The legendary Christopher Biggins (I, Claudius/I’m A Celebrity) as Widow Twankey ought to be enough of a draw on its own to guarantee bums on seats – there are few dames that come close to rivalling his for larger-than-life entertainment – but even beyond the star casting, the show has plenty going for it.

Aladdin is the biggest laugh we’ve had at the theatre for many a long year. The script is full of classic pantomime humour – bad puns, double entendres, tongue-twisters – and almost all of them hit the target. The actors clearly relish performing the jokes and routines (there’s an inspired one using lines from pop songs to comic effect), and you’ll find yourself still recovering from one belly laugh before the next one hits you.

The story is set in Peking. Widow Twankey (Christopher Biggins) and her three sons, Aladdin (Yazdan Qafouri), Wishee (Rikki Jay) and Washee (Max Fulham) work at a laundrette, but Aladdin has his heart set on wooing Princess Jasmine (Emily Hawgood). Thrown into the mix is the nefarious Abanazar (Ryan O’Gorman), who manipulates Aladdin into finding a magic lamp amongst buried treasure so that the genie will grant him enormous power. An enjoyable subplot sees the Emperor Ming (Derek Elroy), appalled that his daughter has fallen for a commoner like Aladdin, rather hypocritically fall in love with Widow Twankey…

All of the main performers bring individual talents to their parts. Max Fulham is an impressively gifted ventriloquist, and he’s ably supported in some scenes by Gordon the monkey. Rikki Jay is tasked with keeping the kids on their toes and their energy levels high – no easy job! – but his cheeky chappie routine had every child in the auditorium fully participating with events on stage. Ryan O’Gorman is suitably maniacal as the villainous Abanazar, earning himself many choruses of boos. Christopher Biggins is delightful from start to finish, effortlessly commanding the stage and never missing a trick to win a laugh. He’s also delightful with the kids plucked from the audience – kind enough to keep them on side but with just enough sarcasm to entertain the adults.

Together though, the cast works brilliantly. In some ways the leads, Yazdan Qafouri and Emily Hawgood as Aladdin and Princess Jasmine, have the least rewarding parts, straight-laced and heroic as they are – but they are fine singers and have the lion’s share of the modern pop songs adapted for the stage that the youngsters will know. Ryan O’Gorman singing the theme from James Bond’s Casino Royale is another inspired choice.

All of the scenes, from the comedy set-pieces to the song and dance routines, are slickly executed, and director Paul Robinson maintains a cracking, almost breathless pace (one or two individual mistakes creep in as a consequence – but it’s worth it for such a high-energy show). There are a few especially impressive moments – a flying carpet is a staggeringly good special effect.

One of the best things about this production of Aladdin is how un-PC it is. Rigid snowflakes may baulk at the kind of humour on offer, and the easily-offended who worry about concepts like ‘cultural appropriation’ would be advised to stay home and read the Guardian. But if you’re bothered by how much PC zealotry is crammed down the throats of children in schools, bringing the little blighters to the panto may even reset the balance and prove a tonic.

On the downside, Aladdin is a little rough around the edges. Mostly, the actors play this to their advantage. There was an audible gasp when Max Fulham tripped up during a tongue-twister – and a naughty word popped out of his mouth. He was clearly mortified, and recovered his composure quickly, but hey, part of the fun of energetic live theatre is the danger, and seeing how the actors improvise when errors occur. However, we found the ending a little abrupt, lacking the big wedding walkdown that had been set up.

Despite those few concerns, there’s no doubt that Aladdin is a palpable hit with the punters. Following the audience towards the exits at the end of the show, it was clear that everybody from ages four to ninety-four had loved it, as they discussed favourite bits, most risque jokes, best puns and favourite performers. Aladdin at the Churchill Theatre warms the heart, tickles the funny bones, and offers a festive treat guaranteed to keep the winter chills away. Go see.