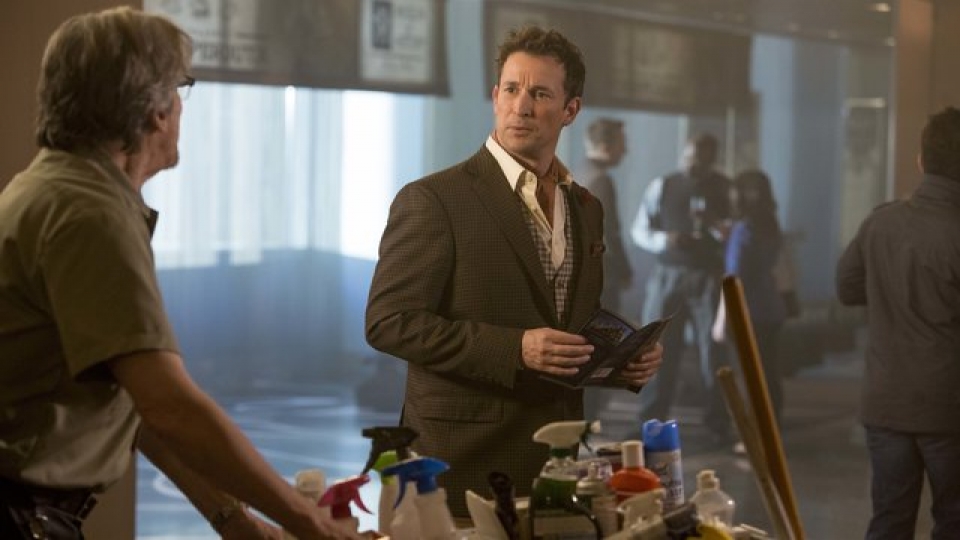 Noah Wyle has appeared in some of the greatest TV ever made over the past two decades. Having appeared in the iconic medical drama ER and having faced alien war in Falling Skies, Wyle returns as Flynn Carsen once again as The Librarians returns to SyFy for its brand new season – continuing tonight at 8pm.

The Librarians centres on an ancient organization hidden beneath the Metropolitan Public Library in New York dedicated to protecting an unknowing world from the secret, magical reality hidden all around. The first season concluded with the Librarians surviving the Brotherhood’s endgame to introduce magic back to the world.

In Season Two, having been separated for months, this eclectic group of characters is drawn back together to solve a mystery when a storm descends on Manhattan. They must learn how to work together again as a team – facing up to some hard truths about themselves – all while continuing to be responsible for collecting and protecting the artefacts housed in the Library and, more importantly, preventing them from falling into the wrong hands.

In Part I of our exclusive interview, EF’s Jason chatted to Noah about what fans could expect from Season 2 of The Librarians, the delay from the TV movies to the series and what it was like to act, executive produce and direct the same show.

Check out part I of the Noah Wyle interview

For Part II of our interview, we discuss Noah’s theatre work, his iconic role as Dr. Carter on ER and what he really thinks about his co-stars on The Librarians!

Your co-stars on the TV show are fantastic. What do they all bring to the table and how do you like working with an ensemble again?

I’m always most comfortable working an ensemble – it’s just more fun and makes the days go by better. It’s like having a big family – you fight with this one, you go play with that one! This is an interesting and very diverse group of people we have on the show.

Rebecca (Romijn) and I get along quite well! She’s just a wonderful straight-man for me. It’s a very thankless role that she plays – to have to be the fulcrum around which these really eccentric and colourful characters spin – and she does it beautifully.

John Kim is the least experienced actor that is on the ensemble – I don’t think any of us knew how inexperienced he was when we hired him! We were like ‘Oh shit! You’ve never spoken on camera before… alright… teaching 101!’ But he’s impressed me greatly with the way he’s hit the ground running. He’s such a sweet kid and very personable and he’s really grown a lot in his role, becoming a good friend.

Christian Kane was no stranger to the production group because he was on Leverage. It was a totally different part for Christian who was more comfortable hitting something and scowling! He was rasping to get out of his comfort zone and when he does it, he’s so unbelievably endearing and sweet. You see a goofy side to Christian Kane which you crave more and more of.

Lindy Booth to me is the workhorse – she is the one that’s just… she comes to work, she has the big paragraphs of all the mathematical jargon to say and she sets a very high bar for professionalism. She is a very sweet and funny person.

John Larroquette is the elder statesman. I’ve known his work since I was a little kid and he’s really smart, really friendly and really dry and really sarcastic. Just a wonderful guy!

Is there room for improvisation during scenes?

Tons! Well, I say that but we don’t really have the luxury of doing multiple takes so if you are going to try something… I remember asking Alan Alda once about working with Woody Allen. I thought they were wonderful and I asked how much of that was improvisation? And he said that his idea of improvisation was thinking of some really funny shit to say the night before and then coming in the next day and making it look like it was off the cuff! So to a certain extent it’s that – doing your homework at night and identifying the moments that you could make something of, and then rehearsals, making it work in rehearsals and trying it out. Basically giving yourself three chances at it.

Every generation has a seminal show, especially a medical based one, and for me that was certainly ER. It was just groundbreaking… How do you look back on your time on the show and the people you worked with.

Fondly… and with an eternal sense of gratitude. Yeah its erm… 1993! It’s inconceivable for me when I look back – that it was that long ago when I got the show. It was very fresh, yet with each passing year it was that much more a part of television history. So we keep in touch when we can – the cast members – and the bonds that were forged in that period of time were really strong because it was such a life-changing event for all of us. I’m always going to be very proud of that work.

One of the trademarks of ER was the authentic medical dialogue. I saw in a recent interview that the cast used to call long pieces of medical dialogue bullets. Do you still remember Carter’s first bullet?

You want me to do it…? (closes his eyes)

A round of applause breaks out after he finishes!

Do you have a particular personal favourite story-arc or episode for John Carter?

Oh I have a few! And they usually revolve around some of the amazing guest stars we had on the show. My character, because he had an affinity to kids and old people, I tended to get some of the great character actors – I got to work with Alan Alda, Eli Wallach, Red Buttons… the list went on and on and on. But in terms of storyline, there were two – Carter’s drug addiction I thought was a really interesting dynamic to put that particular character through and I really enjoyed playing it. And the Africa storyline – which was something I was very much involved with at the time.

I was doing a lot of advocacy work on behalf of medical relief organisations. There was an American version of ‘Doctors without Borders’ called ‘Doctors of the World’. And I came back from touring refugee camps in Kosovo, having seen these guys in action, and just felt that it was a storyline we should absolutely pursue – because so many of those ranks were made up of ER docs who gave up their time to go overseas. And I thought it would be a perfect way to show an international political situation through the eyes of a recognisable character, but also for a character like John Carter, who was always guilty about the privilege he was born into and who was constantly striving to feel legitimised by putting himself further and further in harms way. It seemed like a logical extension to take him so it was great.

You’ve been associated with a theatre company for quite some time now, The Blank Theatre Company. Could you tell us a bit about that and what draws you to the stage?

Sure, I’ve been involved since its inception 25 years ago. We are a very small company but we’ve got a very nice, national reputation for some of the programs that we do, especially the program we run called the Young Playwrights Festival. We take submissions from kids 18 years old and younger – from all over the States – and we choose 10 finalists and we fly them to California and place them onto a month long festival in June. And we’ve been doing that for long enough that some of our alumni have gone onto become Pulitzer Prize finalists, writers finalists – it’s really gratifying to promote new voices for the theatre and to give kids an opportunity to feel validated for something outside of their parents circle of friends or their schools. It’s also a way of generating new material for our main stage shows as well. We are predominantly a new works company so we are always looking to do something that hasn’t been done before.

It’s a gymnasium for me – when I go up on stage I do it in the same way I go to the gym… which is sort of ‘aaaarrhh… I know this is good for me’ but I really don’t want to!

I think it’s changed in so many unquantifiable ways. It is easier for a young actor to break in, it’s a lot harder for them to sustain. I think it’s easier to get that first job because there’s such a demand for content and the bar is pretty low haha! That being said, when you get your first job you are basically being cast because of who you are… it’s your natural charisma and your personality that you’re portraying. You might be able to do that again – you might be able to do that three times – but without the solid technique under you, your career is fairly limited. And I find, by and large, these days that kids are getting opportunities and they feel that it somehow anoints them as professionals… without realising that there’s an apprenticeship and a craft to be learnt if you want any kind of longevity.

The Librarians airs Mondays at 8pm on Syfy.