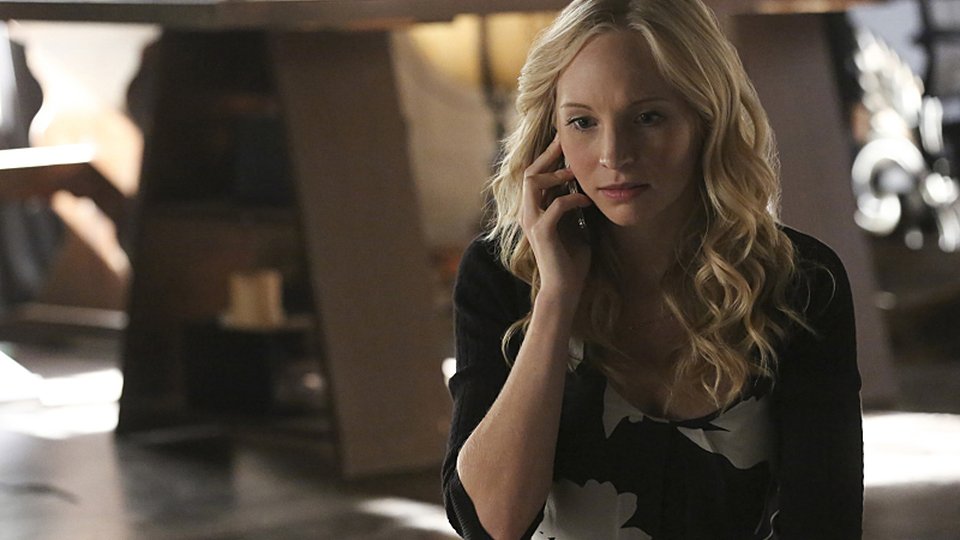 Caroline (Candice King) was held prisoner by Lily’s (Annie Wersching) heretics on the latest episode of The Vampire Diaries after being captured by Enzo (Michael Malarkey).

She found a frenemy in Valerie (Elizabeth Blackmore) who put a spell on her to keep her away from other vampires. Damon (Ian Somerhalder) and Stefan (Paul Wesley) rescued her with the help of Bonnie (Kat Graham) who stopped Matt’s (Zach Roerig) heart so they could enter the house Caroline was being kept in (Matt’s name is on the deed of the house).

Elsewhere in the episode Alaric (Matt Davis) tested the Phoenix stone on a corpse in the morgue, Damon discovered that the heretics had Elena (Nina Dobrev) and Lily threatened Damon to make him admit he killed on of her heretics.

In the flashforward Caroline was seen working at a TV station in Dallas and we found out she was engaged but not to Stefan, whose calls she was refusing to take. The episode ended on a cliffhanger that saw Caroline shot by stakes from an unknown attacker.

The next episode of the season is Age of Innocence. Damon, Bonnie and Alaric set off on a road trip in search of anything they can use against Lily. Caroline learns about Valerie’s past.