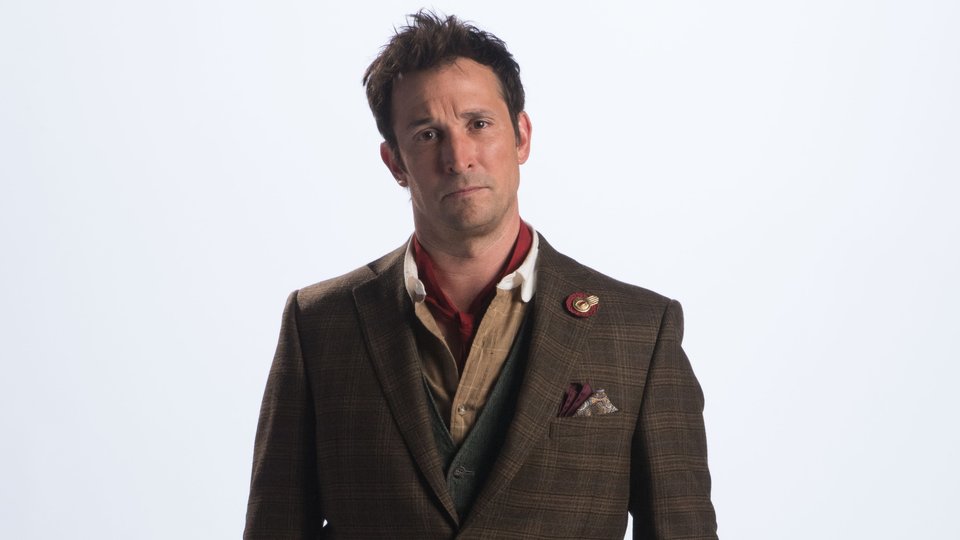 Noah Wyle has starred in some of the greatest TV ever made over the past twenty years. Having appeared in seminal medical drama ER and faced alien attack in Falling Skies, Wyle is now enjoying life as Flynn Carsen once again, as The Librarians returns to SyFy for its brand new season starting tonight at 8pm.

The Librarians centres on an ancient organization hidden beneath the Metropolitan Public Library in New York dedicated to protecting an unknowing world from the secret, magical reality hidden all around. The first season concluded with the Librarians surviving the Brotherhood’s endgame to introduce magic back to the world.

In Season Two, having been separated for months, this eclectic group of characters is drawn back together to solve a mystery when a storm descends on Manhattan. They must learn how to work together again as a team – facing up to some hard truths about themselves – all while continuing to be responsible for collecting and protecting the artefacts housed in the Library and, more importantly, preventing them from falling into the wrong hands.

In Part I of our exclusive interview, EF’s Jason chats to Noah about what fans can expect from Season 2 of The Librarians, the delay from the TV movies to the series and what it’s like to act, executive produce and direct the same show.

Stick with EF for Part II of our interview where we discuss Noah’s theatre work, his iconic role as Dr. Carter on ER and what he really thinks about his co-stars on The Librarians!

What first drew you to the character of Flynn Carsen back in 2004?

It came right in the middle of my ER tenure and I was looking for something totally different in my hiatus period. ER being a drama, this was a chance to stretch some different muscles. I grew up really admiring comedians that were very physical in their delivery, so I wanted to see whether or not I could steal from Chaplin and Keaton and those guys to try and do something really silly in tone. And it was almost like good medicine to counter-balance the work I was doing for 9 months of the year. It’s sort of maintained that role in my life – coming off Falling Skies I found myself chomping at the bit to do something different and Flynn is – well it’s not really work, it’s just play!

The overriding theme going into season 2 seems to be change and adaptability – life for The Librarians isn’t going to be as straightforward as perhaps they are used to. What we can expect from Season 2?

We pick up pretty much where we left off – The Library has just been brought back into this dimension from where it was un-tethered. There are ramifications because of how long it was out there on the string. The Librarians have been empowered to go off and do many missions on their own while Flynn goes off and handles the big stuff. He has continued to be quite smitten by Eve and pulls her in on his missions and is enjoying travelling around the world but really doesn’t like being a team player. This becomes one of the emotional arcs of this season because he doesn’t work or play well with others.

After the last TV Movie ‘Curse of the Judas Chalice’ in 2008 it was rumoured that the next chapter for The Librarian was going to be on the big screen. So what inspired you to take that leap onto serialised television instead?

Ah, well it’s a very strange ruling in the Writers Guild contract in the States that stipulates that if you’re showing sequels on television and you wait longer than 18 months, the rights revert back to the original author of the original script. So we made Librarian I and then we made Librarian II 18 months later. And then Librarian III was 2 years after Librarian II. So all the rights reverted back to a guy named David Titcher, who did the first draft of the first script and who we really didn’t work with after we purchased his script. So… he didn’t want to play with us. It took 7 years of arbitration back and forth to get the rights back… and once we finally got the rights back we didn’t know if there was still an audience for it at all.

I wanted to keep on making TV movies but TNT had stopped making original movies by that point and was focusing more on series. So they pitched it as a series and I was hesitant to jump in and carry another series since I was just finishing up on Falling Skies. So it all seemed like really poor timing until John Rogers came up with this notion of The Sorcerer’s Apprentice – this team of acolytes who could carry the narrative week to week and we would utilize Flynn periodically as a way of being the catalyst for a storyline, setting up and closing the season. This afforded me a little bit of a quality of life, kept the character alive, kept the franchise viable and didn’t necessarily make it mutually exclusive if we could make a movie down the line – it just seemed like a good way to go.

Flynn doesn’t appear in every episode but you also serve as executive producer on the show and have directed the second season opener too. What’s it like wear those various hats and how demanding is that?

He appears in 5/10 epsiodes. I directed the second season opener that we filmed but it actually airs as the fifth episode of the season. I enjoy all the different hats. The longer I work in this business the more I want to have a stake of ownership in what I’m working on and not just be a hired hand, especially when it comes to series television. So being able to have a seat at the table and talk about casting and talk about scripts and locations, who’s going to direct them and editorially… that was something that was really gratifying during the first season. And then I got my DGA card doing an episode of Falling Skies in its final season – and it just spun my head around. I enjoyed it so much!

I was really intimidated to do it and then when I did it, it just felt so right and really comfortable and I couldn’t wait to try it again. So I jumped at the chance to direct an episode of The Librarians. As schizophrenic as you might think it would be to act and direct it’s really not – it’s just an extension of the same thing. And there’s a wonderful crew behind you as a safety net!

Check back to EF soon for Part II of our exclusive interview with Noah Wyle!

The Librarians airs Mondays at 8pm on Syfy.