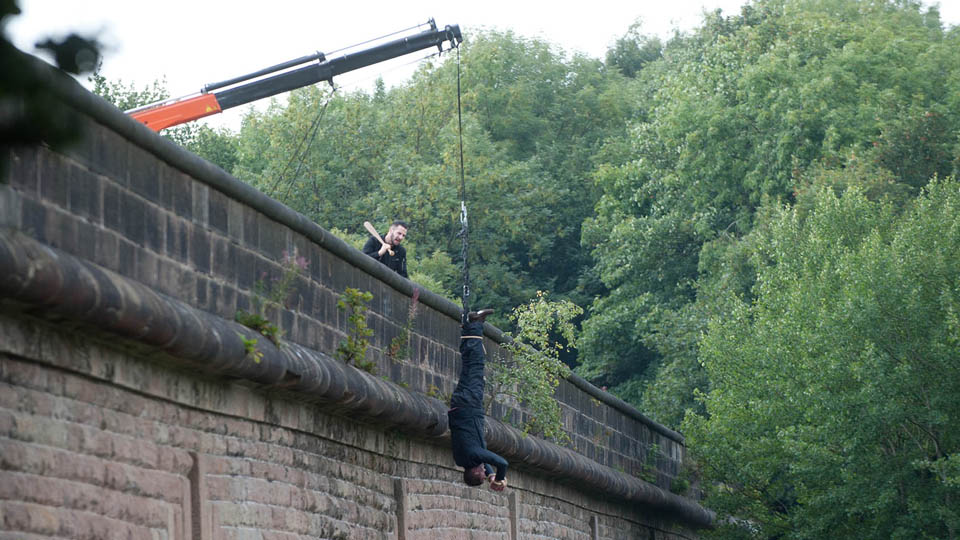 What a week it was in Emmerdale last week!  In the special rewind episode it was revealed that Ross was the person who shot Robert and he was intending to kill him in return for Andy killing Pete. It certainly explains the slightly random behaviour from Andy when he went scrambling with Pete and sent him flying off a ledge into a lake. This week, it looks like Ross is taking matters into his own hands. Read on…

Ross dangles Pete from a bridge

A worried Pete frantically packs his belongings, hoping to get away for a bit, but as he opens the caravan door he’s struck by a baseball bat held by Ross. When he comes to he’s dangling upside down over a very high viaduct by a winch. Ross enjoys having the power over Pete and lets the winch drop down slightly, leaving Pete fearing for his life.

Soon he’s pulled Pete back up and is ordering him to send a suicide text to James and tells him when he has done that, he wants him to jump off the bridge. Ross is unhinged and Pete tries telling him that he loves him and is sorry for leaving him for dead.  As Pete starts to type the suicide text, Ross is stunned.  Can he really push his brother to his death?

Later, as Ross is looking like he’s planning to leave the village, Debbie returns and wants him to kiss her.  It seems absence has made the heart grow fonder as she asks him to move in with her. Cain isn’t impressed and tells Debbie in no uncertain terms that she shouldn’t come crying to him when he breaks her heart.

Rishi has been pushed too far by Jai and goes to meet his solicitor to oust Jai from the factory business.  Priya is feeling the pressure as the family worry that she’s working too hard and fears her eating disorder may resurface.  However, she’s determined to prove that she is capable of running the business and believes that Rishi will allow her to step up.

Rishi makes a call and later secretly meets up with Nikhil and tries to persuade him to stay in the village, but he’s still haunted by the death of Gennie and it doesn’t look like he’s forgiven Debbie for her involvement. Meanwhile, Jai’s behaviour results in a walk out at the factory and as Rishi returns to chaos, he gives Jai his marching orders.

Belle makes a fool of herself at a Halloween party

Zak and Lisa hope that Belle is over Kirin as she arrives home and they fill her in on his arrest for possession of cocaine. She tries to act nonchalant as she questions Kirin about it and has to cover her disappointment when he makes it clear they are just friends now.

Later in the week, Belle is pleased to hear that Kirin is going to Leyla’s Halloween party, but is soon disappointed when she sees him chatting to Vanessa.  She hits the drink, which could be risky considering she’s still on medication.  She makes a fool of herself and leaves the party to walk home. Lachlan, who is also at the party, gets kicked out and follows Belle as she stumbles out. Will she be safe with him?

Tracy hopes Eric will give her the night off to go to Leyla’s party, but when she checks up on him and sees him overwhelmed by customers, she soon impresses.  Just what are her motives?

Robert warns Bernice that the White family are dangerous as she prepares to move in with Lawrence. She’s shocked when she finds she’s been given her own room rather than sharing with Lawrence.

Ashley helps Sandy move out of Edna’s and into his place. Before he goes he gives Edna a useful gift.

Ameila monitors Kerry and Dan’s eating habits for a school project and declares that Kerry is in the danger zone for a diabetic.