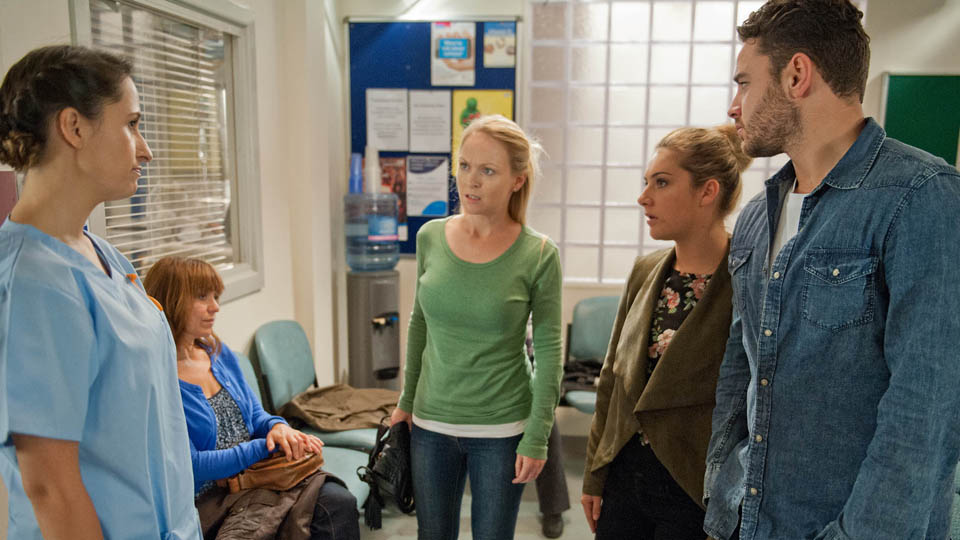 Welcome to our regular look ahead to what’s happening in Emmerdale this week.

Vanessa is filled with dread at having to spend another day the hospital with baby Johnny and goes to the vets surgery eager to get back to work, but Paddy and Rhona insist she spends as long as she needs with Johnny.  She leaves the surgery frustrated.

Later, at the hospital Johnny’s incubator alarm goes off and Victoria and Adam watch on anxiously as medics rush to his aid.  Vanessa is nowhere to be seen.  Rhona is desperately trying to find Vanessa and tells Kirin that Johnny is ill leaving Rakesh and Priya feeling guilty with their secret that Johnny is really Kirin’s baby.

It turns out that Johnny needs an operation and whilst Victoria comforts Adam, Vanessa attempts to compensate for her lack of feelings towards the baby by frantically researching what his operation entails.  As everyone offers her moral support, Vanessa gets more and more agitated at her lack of connection with Johnny.  It’s all becoming too much for Vanessa and eventually she makes a devastating admission to Rhona.

Worried about her friend, Rhona talks to Adam about Vanessa’s difficulty in engaging with Johnny and he decides to approach Vanessa about their concerns, but will she open up to him?  Adam is clearly worried as he later approaches Rakesh to ask about his rights and custody options.  Priya is concerned by Adam’s enquiry and warns Rakesh that now is the time to come clean before things get even more complicated.

It seems that Vanessa and Adam aren’t the only ones affected by baby Johnny’s condition as it brings back painful memories for Ashley and Laurel.

As Priya helps David clear up the shop after Eric trashed it, he tells her that his dad died when Val did.  As if to prove him right, Eric hands David a cheque for all the damage (and more), insisting that it will be enough to ensure their paths don’t ever have to cross again.  Surely he can’t mean it, can he?

Meanwhile, Leyla is thwarted by Eric when he refuses to have her party at the B&B, but luckily Tracy offers to sort everything (for a price!) and manages to manipulate Eric so he’s not at the B&B.  The party is going well and  Leyla and Tracy congratulate themselves, until they see Eric heading their way.  They desperately try to end the party, but Eric bursts in and begins insulting everyone.

Joanie is annoyed to learn that Kyle has found out that Cain is his father, but Zak assures her that it’s a good thing and Cain will come round with a bit of time.  Someone should tell Cain that as he looks less than impressed when he finds Kyle with Moira and things get worse when she rushes to the hospital to be with Adam leaving him alone with Kyle.  Whilst together Kyle calls Cain ‘Daddy’, could this be enough to melt his heart?

Later, Cain berates Moira thinking that she set him up to look after Kyle much to her disgust as she worries about baby Johnny.  Cain learns that it was Kerry who told Kyle that he was his dad.  It seems that Cain is in turmoil and Debbie finds him at Shadrach’s grave and the pair have a heart-to-heart.  Will Cain finally step up to accept Kyle in his life?

An angry Andy puts Pete’s life at risk when he tags along to an afternoon on scrambler motorbikes.

Chrissie pleads with Bernice to reconsider her engagement to Lawrence but she declines and is branded a gold-digger by Chrissie!

Bob and Brenda suffer relationship issues.  Can April save them from splitting up?

Aaron’s uneasy when he hears they’re going to try and wake Robert from his coma.