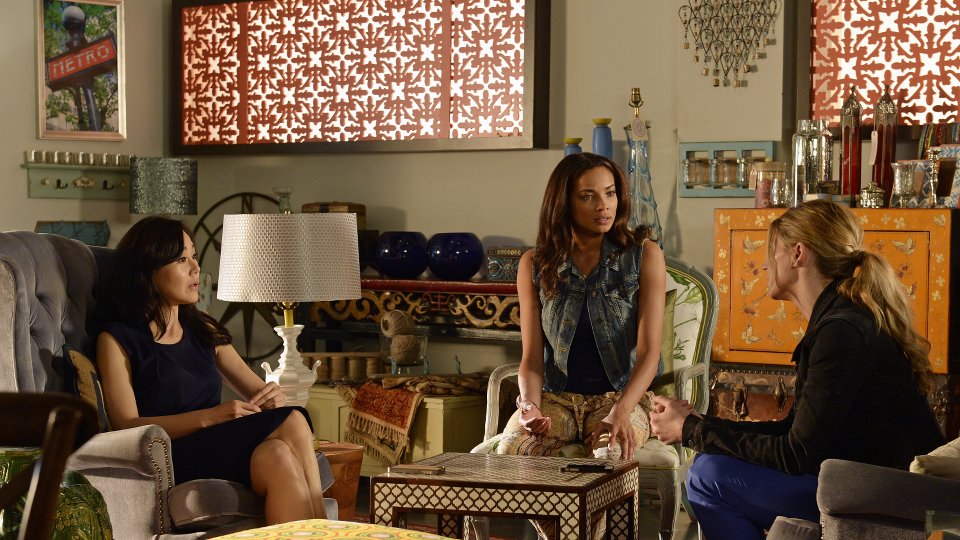 Joss (Jes Macallan) soon realised that she was going to be a scapegoat for Calista (Jennifer Esposito) following Luca’s (Noam Jenkins) murder on the latest episode of Mistresses.

There’s been a murder

Joss checked to see if Luca was alive but he had no pulse. Covered in blood she raced out of the house and tried to call Calista but couldn’t get an answer. She then tried Harry (Brett Tucker) who also wasn’t answering his phone. Joss ran into Karen’s apartment and Calista wasn’t there. She showered off the blood before waiting for Karen (Yunjin Kim) to come home. In tears Joss told Karen what happened and admitted that she didn’t know where Calista was. Karen told her that they had to call the police and assured her that she was there for her.

Calista arrived at her house to find it was a crime scene. She got into the house and discovered that Luca had been murdered. Calista was put in a police car and while she was there she discovered Joss’ voice mail and listened to it. Meanwhile Joss was giving a statement to the police and Karen asked if Joss could finish giving her statement the next morning. The police asked for her clothes and it didn’t look great when she told the detective that she had washed the clothes in the shower.

April (Rochelle Aytes) received a call from Karen and hurried over to the apartment to find out what had been going on. Joss was supported by her friends and told them that she wanted to call Harry. April told her not to call him and told Joss that Harry had slept with Niko (Emmanuelle Vaugier).

Calista was taken to the police station to be interviewed and she gave her alibi. She was asked about the plan that she was alleged to have made with Joss and Calista denied having any knowledge of it. Joss was called in to the police station to answer more questions and as she arrived, Calista was leaving. The detective gave her a grilling and Joss became frustrated when she said that she felt like she was saying the same thing over and over. Joss was told that Calista was surprised when she saw the video of Joss and Luca giving her cause for alarm.

Joss shared her concerns with Karen and wondered if Calista thought that she had killed Luca. They were interrupted by Calista’s assistant who asked if she would meet with Calista. Joss met Calista and was angry when her friend refused to back up her story. Calista told Joss she should have kept quiet and Joss stormed off. Joss told her friends what happened with Calista and they offered to back up her story. As they chatted Joss realised that the man who installed the cameras could help her case. April suggested that Calista might be the killer.

Where is this going?

April and Mark (Rob Mayes) had a late night chat when neither of them could speak. April told him she was worried about telling Blair (Brian White) about her mother whilst Mark accidentally told April that Harry sex with Niko. April promised that she wouldn’t tell Joss what she’d just learned after Mark begged her.

April told Blair about her mother’s visit and thanked him for his advice. Blair offered to take her and Lucy (Corinne Massiah) to a game and April was happy to accept. In the car on their way back from the game, April was surprised when Blair tried to discipline Lucy. When the arrived at April’s, April told Blair that she thought he over-stepped the mark when he told Lucy off.

The next morning Blair arrived with breakfast and told Lucy off again when she reached over the table to get something.

Karen arrived home and discovered a love bite on her neck. After dodging calls from Vivian (Sonja Bennett) all day, Karen went round to see her and Alec (Ed Quinn). Vivian asked what they did while she was out of town and they didn’t tell about sleeping together. Feeling awkward Karen had a chat with Alec about whether or not he was going to tell her about what they did. Vivian saw them and suspected that there was something they weren’t telling her.

Vivian arrived at the apartment and met Joss. Karen prepared dinner and Vivian asked her outright if she’d had sex with Alec whilst she was away. After trying to play coy, Karen came out with it. Vivian was upset and left abruptly. Alec called and asked Karen to go over now that Vivian knew the truth. Karen walked in to the middle of a row and tried to help them move past it. She suggested that they establish rules and Alec couldn’t believe that Vivian was angry that he didn’t tell rather than the fact he slept with another woman. Vivian admitted that Karen had changed their lives but Karen decided to remove herself from the situation.

Harry and Mark went surfing together. As they prepared to hit the waves they talked about Joss after Harry told Mark he’d received a call from her. Mark advised him to just ignore her calls before admitting that he found living with April quite a challenge. When Mark protested too much about Blair, Harry asked if Mark had feelings for her, which he denied. Harry told Mark that he should find a woman to have sex with.

During a business meeting with a supplier, Harry saw an opportunity to hook Mark up with the sales woman. Mark borrowed Harry’s house to woo his bed buddy and his self-esteem took a hit when his hook-up revealed that she had a thing for Harry. Mark told Harry what happened and accepted a beer, which he guzzled down.